Five Weeks in a Balloon 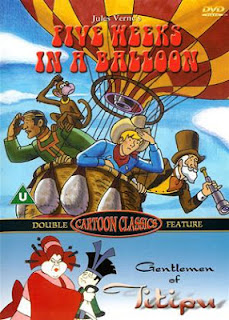 One of the reasons that I love reviewing these less-than-an-hour animated adaptations is that pretty much nobody else ever looks at them in depth. A lot of them are uncatalogued and those that are often fall prey to false information: someone makes an assumption somewhere and everybody else repeats it as fact because no-one has ever sat down and actually discussed the damn thing.

This is a case in point. Various lists of Jules Verne adaptations and animated movies will tell you that this is a Hanna-Barbera production. Some then assume that it is an American cartoon while others who realise that, like most of these 45-minute mini-movies, it’s Australian, ascribe it to the Aussie division of H-B. The fact is that neither William Hanna nor Joseph Barbera are credited on this film, either as producers or just through their company. They certainly did make at least one Verne animation (20,000 Leagues Under the Sea) but Five Weeks in a Balloon was produced by a company called Southern Star (or Southern Star Operations Pty Limited to give it its full title), clearly identified both on-screen and on the sleeve. If Southern Star is/was related in any way to Hanna-Barbera, there is no indication of such anywhere here. (But... there may be a connection. Read on.)

The story opens in London in 1852 where Dr Samuel Ferguson (Laurie Main: Hammer’s Phantom of the Opera, Munster Go Home, Freaky Friday, Dr Watson in Basil the Great Mouse Detective and narrator of numerous Winnie the Pooh cartoons) is visited by his 14-year-old nephew Oliver (Loren Lester: Dick Grayson in Batman: The Animated Series and assorted spin-offs), who now lives in Texas, dresses as a cowboy, speaks with an American accent and idiom and calls himself Buck. Ferguson has been summoned to meet Queen Victoria (Cathleen Cordell: Return of the Living Dead!) at Windsor Castle and takes Oliver along with him.

A Bantu named Irumu (Booker Bradshaw, who was in two episodes of the original Star Trek) has come to tell the Queen that his king has made her a present of ‘the Eye of the Cat’, the largest diamond in Africa. However, the Eye resides on the side of a volcano named Devil’s Peak and legend tells that if it is removed by anyone except its rightful owner the volcano will erupt. Since it has been granted to the Queen, she is its rightful owner and only her emissary can remove it. She gives this task to Ferguson, despite the entreaties of the slimy Duke of Salisbury (also voiced by Main) that he would like to do it. Oh, and the diamond can also only be removed on a certain day, seven weeks hence,

Ferguson, Oliver, Irumu and Irumu’s pet monkey set off to cross Africa from North to South by hot air balloon, although their flight is delayed by a fortnight when their balloon is ‘accidentally’ shot down by soldiers acting on the Duke’s instructions. The Duke meanwhile is on a boat for Africa where he teams up with an evil chappie named Le Griffe (Johnny Haymer - numerous voices for Transformers and a recurring guest role in M*A*S*H - miscredited as ‘Johnny Hayner’). He plans to reach Bantuland first, claiming to be Ferguson, and take the diamond for himself. To this end he has spread word among African tribes to stop the real Ferguson.

One can’t help thinking that all this could have been avoided if the Bantu king had simply waited until he could pick up the diamond from Devil’s Peak himself, then given it to Irumu to take to England. Ah well...

A caption tells us when the balloon reaches Egypt, but there are no more captions after that and the shots of pyramids make even that one rather unnecessary. The narrative follows a typically linear Verne-ian path (although I haven’t read the book so I can’t swear to its fidelity to the source material) with the three men encountering various adventures on their journey. They stop at an oasis where Arabs set fire to their anchor rope; they fend off a flock of vultures; they meet a tribe who worship the Moon and believe that the balloon - named ‘The Victoria’ - is the Moon captured. At one point, when all the ballast has gone, Irumu leaps over the side to save his friends and is captured by Salisbury and Le Griffe. Later, the balloon is cut free but Oliver retrieves it with his lariat. Eventually, Salisbury helps himself to the diamond but, as the mountain rumbles, Oliver swipes it from him.

This is a nicely animated little film with realistic characters (only the pointy-chinned Salisbury comes close to caricature) and nice depictions of Africa, including the obligatory lions, elephants, giraffes, zebras etc. There is a message about how the most beautiful things are found in the most inaccessible places - because inaccessibility limits man’s ability to spoil stuff. Two other voice actors are credited: Gene Whittington, who had small roles in Psycho II and Escape from the Planet of the Apes, and John Stephenson whose enormous CV includes virtually every cartoon show you can name: Scooby-Doo Where are You?, The Jetsons, Secret Squirrel, Top Cat, Jonny Quest, Josie and the Pussycats, Help! It’s the Hair Bear Bunch, Speed Buggy, The Partridge Family in Outer Space(!), Spider-Man, The Smurfs yada yada yada. Arguably his most famous and memorable role is Mr Slate in not only the original Flintstones series but in an endless succession of specials and spin-offs right into the 21st century.

To return to Five Weeks in a Balloon, Kimmer Ringwald is credited with ‘story adaptation’ although it’s rather sad that nowhere in the film’s credits, or on the packaging of this 1997 video, is there a mention of Jules Verne. However, a more recent British DVD which double bills this with an animated version of Gilbert and Sullivan’s Gentlemen of Titipu does give Verne a proprietary credit on the sleeve (but not Gilbert or Sullivan!). Ringwald’s other animation credits include The Mighty Orbots and The New Archies but he/she has also written for live-action shows including Baywatch and short-lived M*A*S*H spin-off Trapper John.

Animation director Chris Cuddington worked on King Arthur and the Square Knights of the Round Table (as did, seemingly, every animation director in Australia) and various middle period Scooby-Doo shows as well as the Beatles and Addams Family cartoon series. His name crops up on other shows too including The Drac Pack, Captain Planet and the Planeteers and at least one Flintstones special. He also directed a 1978 animated version of Black Beauty. Two other directors are credited: recording director Alan Dinehart (Battle of the Planets) and production director Doug Paterson.

No producer is listed but the executive producer is Neil Balnaves - and here is where the mystery of the Hanna-Barbera credit is solved. By coincidence, Balnaves retired as managing director of Southern Star exactly one week before I purchased this eight-year-old video tape and his biography was handily included in a press release. Balnaves was appointed MD of Hanna-Barbera Australia in 1974 and led a management buy-out in 1988, when the company name was changed to Southern Star (which went on to become the largest film and video production company in Oz). Presumably this version of Five Weeks in a Balloon has been edited to remove any reference to Hanna-Barbera Australia, or possibly Southern Star already existed as a subdivision of HBA in 1977. The answer to the question ‘Is this a Hanna-Barbera production?’ is: yes and no. Probably.