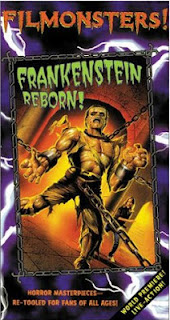 The tape box says 70 minutes, but in fact this ‘film’ is only about 42 minutes long, including a two-minute introductory sequence and three minutes of end credits. Despite this, Frankenstein Reborn! is a delightful reworking of Mary Shelley’s story that stands up against the best kid-horror like Goosebumps and Are You Afraid of the Dark?.

In 1997, Charlie Band (head honcho of notorious production company Full Moon, the man behind the Trancers, Puppet Master and Subspecies franchises) had the idea of reinventing classic horror monsters for kids. To this end he commissioned six scripts which retold the stories in modern times with teenage protagonists and called the result Filmonsters!. I have in my archives a promotional booklet from the 1998 AFM which touts Filmonsters! to the TV market as ‘13 one-hour classic monsters tales ... in the tradition of Goosebumps’ (42 minutes plus ad-breaks = one hour). The four titles promoted in the booklet with synopses (see below) and artwork are Wolfman Reborn!, Frankenstein Reborn!, Dracula Reborn! and The Mummy Reborn!, though the text also mentions the Creature and the Invisible Man as Filmonsters! subjects. Sadly, only the first two titles were ever produced (the first with a slightly different title).


“Thirteen-year-old ANNA FRANKENSTEIN is intrigued by the secret experiments of her eccentric uncle VICTOR, but her curiosity soon turns to terror when she’s confronted by Uncle Victor’s latest creation - a hideous looking artificial being, stitched together from the bodies of the dead.” Thus says the promo blurb.

Frankenstein Reborn! turns out to be a little gem. Haven Burton (who seems to have no other film credits) stars as Anna, orphaned by a car crash and sent from America to a quasi-medieval mittel-Europe straight out of the old Universal horrors. Jaason Simmons (Baywatch, Velocity Trap) is Uncle Victor, a good-looking but intense young chap who lives in a big old castle with his housekeeper (the strict Frau Herstner: Oana Stefanescu, dubbed by Ariauna Albright) and his assistant - not a hunchback but the saturnine Herr Ludwig (George Calin: Retro Puppet Master). Lonely and confused, Anna befriends the groundskeeper’s son Thomas (Ben Gould: Saved by the Bell) who knows how to sneak around the castle without being seen.

Of course, Victor and Ludwig are creating an artificial man from bits of bodies sewn together, played extremely well by Ethan Wilde. Anna and Thomas witness the creation and see the monster run off into the woods. Thomas knows to leave well enough alone, but Anna befriends the monster, a lovely bit of storytelling that plays up the pathos of the creature so often missing from other Frankenstein movies. Ludwig and Victor recapture the monster and though Victor realises that they have created a living, thinking being for whom they must take responsibility, Ludwig just wants to kill the thing and start again. In a fight in the lab, Ludwig is killed and then both Victor and the monster exhort the kids to get out as the laboratory collapses in flames around them (for reasons that aren’t entirely clear) destroying both creator and creation.

The acting is good, the script and direction are of a level that is accessible to both kids and adults - it’s a thoroughly enjoyable little picture. Sets are kept interesting but cheap by shooting in an old Romanian castle and Victor’s lab is a very nice piece of production design by Christian Niculescu (Highlander: Endgame, Dark Prince) - set off by excellent lighting and camerawork from cinematographer Viorel Sergovici Jr (Elvira’s Haunted Hills) - that doesn’t reflect the sort of minuscule budgets that must have been on offer.

Best of all is the monster make-up, one of the best designs I’ve ever seen (and I’ve seen them all!). This Frankenstein Monster is very tall and emaciated, the actor’s frame accentuated by make-up that makes him appear even more gaunt. Skin is stretched tight over his face, his eyes are deep-set and there is a bony ridge across his forehead. Unlike many such designs, he actually does look like an assembly of bits of cadavers with a new brain stuck in the top. The late Mark Williams (Syngenor) was the man responsible.

(There is also the most massive gay subtext between Victor and Ludwig. I don’t know whether it’s meant to be there as a joke for adults or whether I’m just reading to much into this, but with their flowing locks, fancy shirts and meaningful glances they are very clearly a couple...) 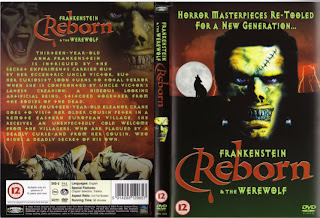 Several interesting names are buried in the credits: editing is jointly credited to Don Adams and Harry James Picardi (Jigsaw, Vengeance of the Dead) and JR Bookwalter (Ozone, Witchouse 3) while Ariana Albright is credited as Editorial Assistant. Director ‘Julian Breen’ is actually David DeCoteau under one of his numerous pseudonyms, while 'Benjamin Carr' (Neal Marshall Stevens) has written a score of Full Moon titles, including Curse of the Puppet Master, The Creeps, Totem, Zarkorr! The Invader, Stitches and Shriek(er). The opening pre-credit sequence, which presumably would have been the title sequence for the Filmonsters! series, shows the puppets from the Puppet Master movies unearthing a coffin with the brand title carved in the lid.

So how is a 42-minute film stretched out to 70 minutes? Well, first there are trailers for various Full Moon kidflicks - The Shrunken City, The Clockmaker, The Phantom Town, The Werewolf Reborn! (all written by Carr) and this film - plus an ad for the Puppet Master action figures. Then after the film comes Behind The Screams: The Making of Filmonsters!, directed by none other than Dave Parker (The Dead Hate the Living).

This is a great 26-minute documentary which looks at not only the production of Frankenstein Reborn! and The Werewolf Reborn! but also the history of monster movies in general. There are terrific interviews with Charlie Band and horror expert David J Skal, plus the main players from both completed Filmonsters! pictures. Also clips from trailers for House of Frankenstein, Ghost of Frankenstein, The Wolf Man, Dracula Prince of Darkness, Werewolf of London and Hammer’s The Mummy - even clips from Nosferatu and the 1910 version of Frankenstein! There is also footage from Frankenstein Reborn! which includes at least one scene - Ludwig and Victor examining the dead body they plan to reanimate - that isn’t in the finished film. (One unfortunate slip-up is a caption at one point heralding ‘The Nuts and Bolts of Frankenstien’ (sic).)

Nevertheless, Frankenstein Reborn! is a cracking little film. Although only two Filmonsters! episodes were completed, Charlie Band is never one to let something go to waste so in 2000 he combined them into a faux feature under the title Frankenstein and the Werewolf Reborn! which is now available on R2 DVD for a fiver.

As a bonus, here are the synopses for the two Filmonsters! episodes which were publicised but never produced:

The Mummy Reborn!
ARTHUR GROSVENOR, 15-year-old son of the famous Egyptologist, SIR ROBERT GROSVENOR, was by his father’s side at the discovery and opening of the tomb of Pharaoh Ah Hotep. When the Pharaoh’s mummy vanishes and the violators of the tomb begin to suffer mysterious and terrible deaths, Arthur must find a way to put the vengeful living mummy to rest.

Dracula Reborn!
The year is 1887, JONATHAN HARKER and his young brother ROBERT travel to the wolds of Transylvania on business. Upon their arrival, the two are greeted by the ancient Count Dracula who has a much darker hidden agenda. When Jonathan falls under the spell of the evil Count, Robert is the only one who can save him - and destroy the deadly vampire.
Posted by MJ Simpson at 10:39