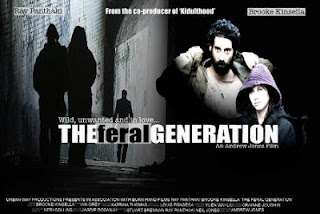 The Feral Generation is very definitely not a film that I would watch by choice. It’s a 90-minute character study of two homeless junkies wandering around Swansea, stealing, shouting, getting wasted and protesting their love for each other. Starring two refugees from EastEnders. It is pretty much the exact opposite of my ideal movie.

Nevertheless, I must tip my hat to Andrew Jones and say that he has made an extraordinarily impressive film. The subject matter doesn’t interest me, I felt no sympathy with or for the characters - damn it, I don’t think I’ve ever seen a movie where I hated the main characters so much - yet as the credits rolled I simply sat there, contemplating the film. It took me some time to even reach for the remote. That’s a sign of good film-making.

Those who know my cinematic taste know that I have no truck for social realism. I go to the cinema to see something different to the stuff I have to cycle past every day to get to work. I like to watch movies that explore the big questions in, and about, the world: the nature of humanity, the meaning of self, the past, present and future of the only habitable planet we know.

Or failing that, kickboxing cyborgs.

But I don’t like to turn down a screener when it’s offered and the great benefit of reviewing what you are sent, rather than just what you choose to watch, is that it broadens your horizons by introducing you to things that are outside your current boundaries of taste or interest. 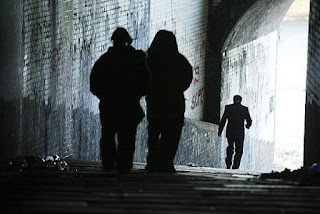 And so we come to The Feral Generation, in which we follow a few days in the miserable, cold lives of Vinnie and Nikki. They steal food and money, they sleep either in stolen cars or in a communal squat, they score drugs from a dealer. Intercut with this, the two are interviewed separately, evidently at a later date when they have been cleaned up somewhat.

Now I really, really disliked these characters. Yes, they both came from wretched, broken homes and were abused by their parents. Call me a cold-hearted bastard but boo-bleeding-hoo; plenty of other people have had wretched childhoods without ending up stealing and mugging to feed their heroin habit. In any film where the protagonists are petty criminals, my sympathy is always with the anonymous victims, the ordinary decent folk working hard to earn a living. Somebody slaved and saved to be able to afford that car that you’re stealing. That shopkeeper barely makes enough to live on even before he takes account of shoplifting losses.

Yes, they’re homeless, yes, they haven’t any food or money. But the impression I got was that I would dislike this couple even if their circumstances were different. Nikki comes across as a pathetic (in the truest sense), clingy girl with an idealised romantic view of the twat she’s “in love with”. Vince seems to be a complete drip, a tosser who has somehow landed himself a bird and is happy to string her along. They’re a self-centred, self-pitying couple who elicit no sympathy whatsoever. When Vince, in an interview segment, pours scorn on a mention of Big Issue sellers, arguing that what he does is more noble and honourable, I just wanted somebody to come round from behind the camera and smack him in the mouth. This is somebody who may be in big, big trouble, and undoubtedly hasn’t got there entirely by his own actions, but he’s got no interest in trying to help himself or accept help when it’s offered. 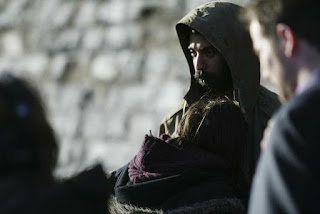 But all the time I’m watching this, I’m thinking: this can’t be right. No-one makes films about homeless people in order to make the audience hate them. Surely this is aspiring to be a Cathy Come Home for the 21st century, a sympathetic look into an invisible underclass of society, a plea to tolerance and understanding for those who have fallen off even the lowest rung of the ladder. And maybe that is how a bleeding heart liberal would view this film and these characters. (And this review probably makes me sound like an evil bastard, even though I think homelessness is one of the great scandals of our age and do what I can to support charities that work to help people like Nikki and Vince. But guys, you’re fictional characters - give me something to work with here, some shred of hope or human spirit.)

So here’s my take on The Feral Generation. I think Andrew Jones has pulled off a genuinely objective, dispassionate study of an aspect of modern life about which it is very hard indeed to be either dispassionate or objective. The Feral Generation is not a film that casts judgements - we are left to do that for ourselves - but it simply documents in detail something which we normally only see briefly at a distance. It’s an incredibly difficult tightrope to walk, balanced between ‘look at these filthy leeches, why should anyone help them?’ and ‘those poor people, they never had the breaks, how can any civilised society allow this to happen?’.

What impresses here is not what the film has to say, if indeed it has anything to say (we all know that there are young folk out there, sleeping rough, cold and hungry and hooked on drugs - anyone who doesn’t realise that there are kids like this in every major city needs a good slap) but the way that it says it. For all that EastEnders on an actor’s CV is normally not associated with top quality thespianism, both Brooke Kinsella and Ray Panthaki (neither of whom I had ever heard of) are simply brilliant. They are utterly, utterly believable in roles which would tempt many actors to go that little bit over the top because oh, this subject is so serious and important and Bafta-worthy. This is terrific acting, this really is award-winning stuff. 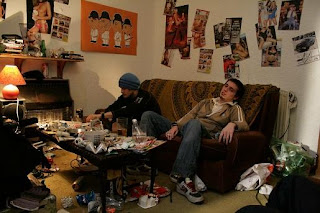 And it is helped by Jones’ amazing dialogue which manages to be realistic and credible enough to fit in the mouths of these characters yet at the same time erudite enough to hold our attention and make us think about what is being said. The camera work is naturalistic without being obtrusive, the songs on the soundtrack are expertly judged, the editing is sympathetic and smooth. Frankly, some of the direction is astounding; there are some pauses in the interviews that seem to last forever and shots of the couple hugging and tearful which last even longer. This is incredibly assured and confident work for a young director on his second feature.

And then there’s the ending. We reasonably assume that the two halves of the film - interviews and homelessness - will connect in some way and of course they do but in a manner which is beautifully handled. We’re shown very little, told even less, about what happens between our last shot of the couple and the final interview segment, but we can surmise. I’m not even sure if I have surmised correctly but my explanation fits the facts (I think) and if there’s another equally good explanation, all well and good. That’s a sign of clever film-making.

It’s not all bleak, it’s not all grim, there is redemption of a sort at the end and that makes this film that I didn’t particularly want to watch, about two people who I would cross the road to avoid even if they had suits and jobs, eminently satisfying. (Let me just reiterate that point: I didn’t dislike Vince and Nikki because they were homeless junkies. I disliked them and they were homeless junkies.)

The Feral Generation is a magnificent film, powerful but not preachy, serious but not sentimental. In terms of storytelling it’s simply masterful: stunning acting, excellent script, amazing direction, supremely competent on every technical level. I’m not certain how cinematic it is though; it came across as more televisual, the sort of thing that Channel Four might have shown a few years back when it had standards.

Among the supporting cast, the only sizeable role is Paul, an amoral Scandinavian drug dealer played by the hardest working Dane in showbiz, Mads Koudal. However unlikeable your protagonists, you can always rely on Mads to play a character who is even more of a bastard. (Apparently Michael Berryman of Hills Have Eyes fame turned down a role and I assume that it was this one.) 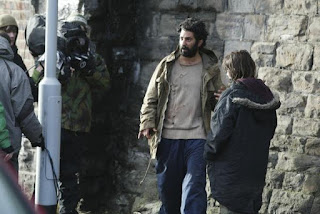 Andrew Jones’ first film was Teenage Wasteland: “A hard hitting, documentary style look into the lives of three teenagers and their dysfunctional families in Swansea.” This played the Swansea Film Festival the same year as Gareth Evans’ bleak and violent Footsteps - boy, the parties at that festival must have been cheery affairs. (Evans gets a special effects credit on Feral.) Whereas Teenage cost under £2,000, this film's budget ran to six figures, largely on the basis of the casting of the two leads.

Among the commendable work by Jones’ crew special mention must be made of make-up artist Jodie Jones who does an amazing job of making Kinsella and Panthaki (both of whom can be quite glamorous, judging by a quick Google image search) look like they haven’t washed for a month. Vinnie and Nikki both look pallid, wasted, pale - the twin effects of irregular meals and regular junk are there to be seen in Jones’ handiwork. Like several of the cast and crew, she previously worked on The Lost, a recent British war/horror film which achieved a degree of publicity by using an audio recording of a poem to legitimately list Peter Cushing among its cast. Editor Ian Grey, DP Louis Fonseca and costume designer Grainne Joughin are among the other Lost alumni. Ray Panthaki, who is also one of the three credited producers, has his own war/horror credit - he was one of the soldiers in 28 Days Later.

Andrew Jones is currently developing a remake of Driller Killer(!) and the raw, powerful work on show here bodes well for that more obviously exploitable picture (although I suspect it will be very different to Abel Ferrara’s original). When violence appears in The Feral Generation - in the scenes with Paul the drug dealer and in the final act where a horrific event provides the impetus for progress and, eventually, redemption - Jones shows a sure and steady hand which lets us witness the brutality and ugliness of violence in a way that doesn’t simply shock but actually appals. 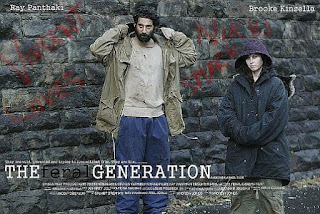 It is always tricky reviewing films that don’t appeal to me personally - but that’s what I have set myself up to do (it would be stretching it to say “but that’s my job”). Nevertheless a good film critic should be able to judge a film on how good it is, not whether he or she likes it. And this is very good indeed.

Email ThisBlogThis!Share to TwitterShare to FacebookShare to Pinterest
Labels: 2007, UK