You see them in bargain bins and cheapo shops everywhere - those anonymous cartoon adaptations of public domain stories. They are often stories which have been filmed by Disney (and I’ve known people be daft enough to buy them by mistake), they never have any cast or crew credits on the sleeve, and they’re always 47 or 48 minutes long.

In the spirit of (a) research, and (b) the festive season, I splashed out three quid down Poundstretcher to see what this version of Dickens’ timeless classic actually was. It turns out to be not bad. The animation is for the most part smooth and full, not the limited animation of a typical 1960s/1970s TV cartoon. It is imaginatively directed, using silhouettes effectively for some scenes, for examples. Nothing Oscar-threatening, but considerably better than what one might expect. And the painted backgrounds (by Ann Williams) are colourful and artistic. 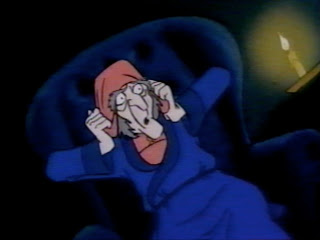 The story is very faithful to Dickens, using almost entirely the story’s original dialogue (something that later, bigger animated versions would do well to note). There have been a few scenes snipped for time, so that Scrooge’s nephew Fred appears early on to wish his uncle a merry Christmas, but is not visited during the ghostly sequences. There is also, oddly, one song (sung by Scrooge and Fred). The short running time (47 minutes, though it cheekily says 60 on the sleeve!) means that the film does not outstay its welcome, though the pacing is hampered by the Scrooge/Marley scene which is way too long and too static.

My point (and I do have one) is that what one might assume to be a recent cheap-jack knock-off from the Far East is actually a well-made 1969 Australian TV special, worth three quid of any animation fan’s money. The animation betrays a very obvious East European influence, which is no surprise as director Zoran Janjic worked in Zagreb before moving to Australia in 1960 where he worked on, among other things, the short-lived cartoon adventures of the Beatles. 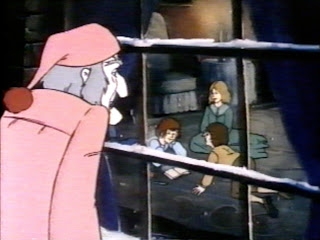 A Christmas Carol is one of many TV cartoons which Janjic made for API Productions, most notably the series King Arthur and the Square Knights of the Round Table. In 1972 he joined Hanna-Barbera’s Australian studio, working on shows such as The New Scooby Doo Movies and Wait Till Your Father Gets Home.

Scrooge’s voice is supplied by Ron Haddrick, a busy and acclaimed actor on Aussie stage and screen (Quigley Down Under, Shirley Thompson vs the Aliens) who performed with the RSC in the early 1960s. He was also the lead voice in API's 1977 version of A Journey to the Centre of the Earth.

review originally posted before November 2004
Posted by MJ Simpson at 19:16