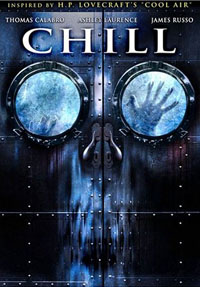 Chill is an interesting film. It’s interesting on the one hand because of what’s good about it. It’s original, well-made, with a strong cast and keeps the viewer’s attention. It’s also interesting because of its main problem which is unusual but doesn’t prevent the film from being enjoyable.

And that problem is that at times this seems like two completely different films bolted together.

Thomas Calabro (They Nest, Ice Spiders) stars as Sam, an unassuming guy, trying to make it as a writer (though we never see him writing or find out what he writes) who is looking for a menial job that will help him pay the rent. He applies for a job in an all-night convenience store, managed by dismissive but not aggressive Mrs Herrero (Barbara Gruen), and owned by the mysterious Dr Munoz.

Across the street is a clothing boutique owned by recently separated Maria (Hellraiser’s Ashley Laurence) who takes a liking to Sam while fending off the advances of unpleasant cop Defazio (always busy James Russo). Detective Defazio has contacts among the local lowlife including pimp Tre (Victor Grant) who wants the detective to find out what has happened to two of his bitches who have disappeared.

All of this is played straight and gritty and realistic, although I could have done without the somewhat clichéed splash-panel prologue of an unidentified young man being hunted down by a white van. 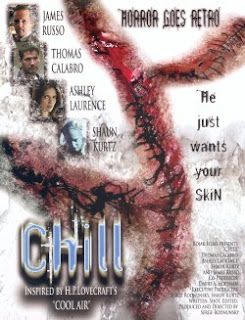 Contrasting with this is Dr Munoz, played by executive producer Shaun Kurtz with gleeful hamminess that would undoubtedly work in some other movie but is completely out of step here. He suffers from a mysterious skin condition which requires him to stay in a cold meat locker behind the convenience store. His skin is deathly pale, he wears a curious hooded costume and he sleeps in something like a cross between a coffin and a chest freezer. And he has some sort of mysterious, hulking assistant (Clark Moore) who drives the van around and kidnaps whores. Or something.

Munoz just doesn’t fit in with the general tone of Chill at all, quite apart from the fact that his situation is never made entirely clear. We are treated to intermittent flashbacks to when Dr Munoz was some sort of working scientist and something went wrong and now he is... what? A vampire? A particularly erudite zombie? Why does he have his hulking assistant kidnap and chain up whores? Why does he own and live behind a convenience store? How has Defazio not noticed that all the kidnappings happen with a small radius of this store?

Another failing is that the location is never made clear. Sometimes it seem like the 24-hour store and Maria’s boutique are in some isolated, downtown part of the city, at other times it seems like they are part of a shopping area - although we never see any actual, you know, shoppers.

Don’t get me wrong, I enjoyed Chill. I enjoyed it despite the above caveats, despite a twist ending that didn’t make any sense and despite some inadvisable cut-price CGI effects at the climax that really weren’t needed. I particularly enjoyed the characterisation and the way that people’s loyalties changed. But I just couldn’t get past the fact that pantomime villain Munoz seemed to have wandered in from another movie. Director Serge Rodnunsky has a fondness for dialogue scenes that are an endless series of cuts between two close-ups; watching Sam talk with Dr Munoz is like constantly flicking between two channels showing different films. 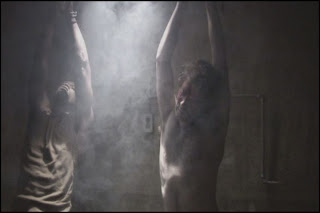 Chill is loosely based on an HP Lovecraft story called ‘Cool Air’ which was previously filmed as a Night Gallery episode, as a late 1990s short film and as Shusuke Kaneko’s segment of Necronomicon, but I have not seen any of those, nor read the source material so I can’t comment on its faithfulness or otherwise.

Writer-director-producer-DP-editor Rodnunsky has a staggering 41 directorial credits since 1990, not one of which I have ever heard of. The man is a factory, just a fairly quiet one I suppose.