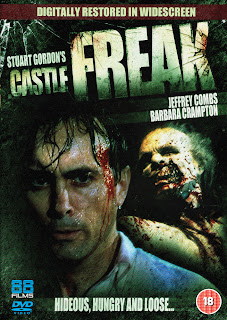 It's an old, old idea. The forgotten child - disfigured, abused, existence denied, holed up in a secret room. The evil twin in the attic. Castle Freak takes that premise and runs with it; runs with it brilliantly. It's a belter of a film, and a proper horror movie too.

Jeffrey Combs and Barbara Crampton re-team from Re-animator (and indeed, from Trancers II) as John and Susan Reilly who have unexpectedly inherited a castle in Italy from John's aunt the Duchess D'Orsino. In a prologue we see this batty old recluse (Helen Stirling: Tea with Mussolini) shuffling down to a dungeon where she savagely beats an unseen chained figure, ignoring his pitiable, wordless screams. Then she shoves a plate of food into his cell and leaves.

John and Susan have a blind teenage daughter Becky, played by 15-year-old Jessica Dollarhide who gave up acting a couple of years later. Her disability stems from a car accident (seen in flashback) caused by her father's alcoholism which also resulted in the death of Becky's little brother JJ. Although John is off the bottle now, Susan is distant from him and they have only stayed together for Becky's sake. 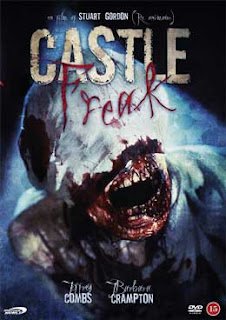 The titular freak has survived in his cell since his mother's death by drinking water seeping through the rocks. When he hears people in the castle, he manages to break out of his shackles (in an agonising scene) and goes in search of the new arrivals. Jonathan Fuller (The Pit and the Pendulum, Arcade, Campfire Tales) gives a superb performance as the freak, evoking all the pity of the great tragic monsters like Frankenstein's monster or the Wolf Man, in amazing full-body make-up by John Vulich (Babylon 5, Day of the Dead). When we get a clear look at him, it becomes evident that his tongue is not the only thing that his mother cut off...

Becky senses someone in her bedroom, but there is no sign of a break-in and the local carabinieri are unwilling to spend days searching the 100+ rooms in the castle. John's attempts to reconcile with his wife are rebuffed and he finds himself in a local bar, hitting the bottle and picking up a hooker (Raffaella Offidani). The freak spies on the couple having sex in a wine cellar then accosts the whore as she leaves, crudely imitating what he saw - with horrific consequences.

The cop who previously refused to search the castle for Becky's intruder now comes looking for the hooker who hasn't been seen since she left the bar with John. He's played by bullet-headed Luca Zingaretti who is quite the heartthrob in Italy by the looks of it and who manages here to bring depth, passion and interest to a relatively minor character. The plot develops as John gets arrested on suspicion of the hooker's murder, with Susan and Becky left alone in the castle guarded by two policemen who are clearly not going to be much use. A further complication is John's discovery of the tomb of the Duchess' son who died around the same age as - and looked exactly like - JJ. 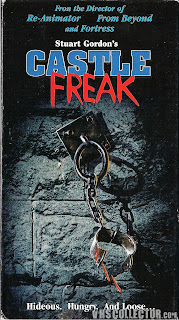 John's shifty lawyer (Massimo Sarchielli, also in Argento's Phantom of the Opera and Nonhosonno) stokes the gothic intrigue by revealing that John is related to the late Duchess in more ways than he thought, although that subplot never seems to go anywhere. The lawyer's sister, the housekeeper, is well played by French-based, Hungarian-born Elizabeth Kaza who was so memorable as Phaedra in Iron Warrior and was also in Borowczyk's The Beast. It's a measure of the confidence and maturity on display in this film that some scenes between the siblings (and some scenes with the police) are in unsubtitled Italian.

The film builds to a tense and horrific climax, with a handful of very nasty deaths along the way punctuating the sense of unease that centres around Becky's vulnerability. The only stumbling block in the script is that old get-out cliché, someone making a crucial deduction by picking up on a word or phrase in an unrelated comment. That always bugs me, but Castle Freak is otherwise so enjoyable that I can overlook it.

The script by Stuart Gordon and his regular collaborator Dennis Paoli (Re-animator, From Beyond, The Dentist, Dagon) is loosely based on Lovecraft's 'The Outsider'. The film was shot in executive producer Charlie Band's own castle in Italy, where Gordon had previously made The Pit and the Pendulum, and was one of the last films completed before Band's company Full Moon hit problems in the mid-1990s. 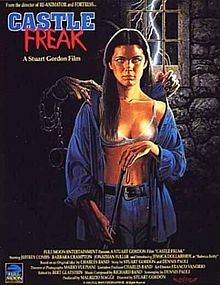 Cinematographer Mario Vulpiani lit a selection of obscure gialli in the 1970s although his most (in)famous credit is probably the 1980 Donald Pleasance-starring superhero nonsense Puma Man, on which this film's producer served as his camera operator! Editor Bert Glatstein worked on the first three Subspecies films and also cut episodes of VR Troopers and Power Rangers. Costume designer Tiziana Mancini was wardrobe mistress on Suspiria.

This terrific film is available as an extra - an extra! - on the DVD of Danny Draven's excellent (Stuart Gordon Presents) Deathbed, making that one of the best value double bills you're likely to find. The movie is also available on its own on a disc which includes a 'making of' featurette.