Twelve years after I first interviewed Emily Booth, I caught up with her again just prior to the release of Doghouse, in May 2009. 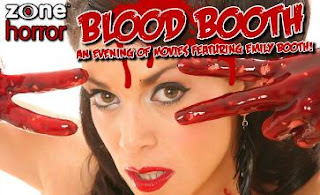 Given that the UK indie horror scene is not too large, I suppose you probably knew Jake West before you worked with him on Evil Aliens. How did you first meet him?
"I think I first met Jake because I did a film called Cradle of Fear. I can’t remember if it was before Cradle of Fear or after it but basically it was through Eileen Daly. Because I worked with her on Pervirella and then I kind of worked with her again on Cradle of Fear. Around about that time, Jake West was doing Razor Blade Smile and he actually wanted me to do a role. In Razor Blade Smile, Eileen Daly has this sort of small, semi-vampire, lesbian relationship with this girl. I can’t remember her name. He wanted me to play that role.

“At the time, I was at university and I was really worried that I was just doing loads of nudity and lesbian stuff. So I turned it down, which Jake always teases me about. I turned down a role in Razor Blade Smile and he was always taking the piss out of me for that, but I was too worried that I was getting into just being a lesbian vampire. So I met him through that really, and then I did a show called Shock Movie Massacre for Bravo. He directed the title sequence for that so I worked with him for the first time on that."

Evil Aliens was very low budget, wasn’t it?
"Yes, it was very low budget but for me it still felt like a professional shoot. They still had a very good crew and everyone took it relatively seriously. When I talk to the other Evil Aliens actors - because we’re still in touch - we all felt like we were doing Big Brother or something - but making a film. It was too much fun. It felt like a film experiment where we didn’t know each other and we were all taken to the countryside and lived in caravans or a farmhouse - then we had to make a movie most evenings. It was really bizarre. I don’t have just one memory of that, apart from it just felt like a huge amount of fun with amazing friends, making a movie!" 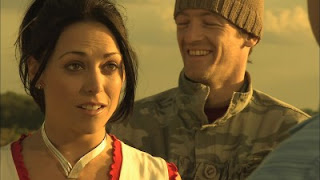 With Doghouse, you were involved right from that start. There was an online film clip of you, Jake and Bob Keen.
"Oh yes, there was actually. As I say, I’d worked with Jake a couple of times before and we get on really well in a sort of working relationship. He knows I genuinely love my horror. We both have these big geek face-offs. I was never going to have a main role because most of the main roles are men anyway, but he did always want me to be involved somehow. So he got me on board as the Snipper very early on.

“He sent me the concept artwork, oh I don’t know, a year and a half before the film. Because of my involvement in horror behind the scenes as well, because I work for Zone Horror and I write for Gorezone and stuff, he just thought I could help with the investing side of it. So I went to investors meetings and I met them and told them about the project, so I kind of helped out from the beginning."

At the start, were you expecting it to be a similar scale to Evil Aliens? When did you realise it was becoming a big project with name actors and so on?
"I knew, yes, it would be bigger and better than Evil Aliens because they started to get a proper budget in. I guess when they told me who was cast in the film, because I knew Danny Dyer. When they told me Danny Dyer and Noel Clarke were in it, that made me think oh God, this is going to be a proper cinema release. And when I found out that Sony had already come on board. They came on board just by reading the script which is apparently quite rare. They hadn’t even seen any footage and they said, ‘We want to distribute it.’ We were all like, oh my God!"

What was the heavy make-up like for your zombird character?
"This is the biggest make-up job definitely that I’ve done but I’m quite used to being covered in horrible stuff: blood, sweat, tears, all kinds of bodily fluids. I’ve had them all actually! So I love all that side of it. I actually went and did a lot of filming at the special effects workshop for Zone Horror. I do love that process but it was pretty hard going at first. Like with all make-ups, you start off very, very fussy. There’s a huge team of about ten make-up people every day having to work on you. Because they’re getting between three and twelve zombirds ready for the same scene. So you have a lot of work going on. It’s such a buzz, it’s the best atmosphere being in the make-up chair. 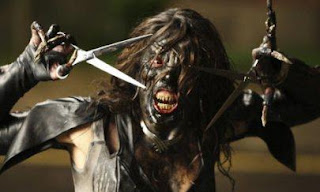 “But it did take about three and a half hours to put on - and this is every day, when you’re knackered. And then to take it off at six or seven in the morning took about an hour. And every night I had to wash my hair because it was covered in black paint. And we had so much body paint on as well, so our skin was very much scrubbed. Actually I had a bad skin reaction which took me by surprise because I’ve never had that kind of problem before with make-up.

“It was so bad that I wasn’t allowed to have make-up on for four or five days and I had to wear a mask, a really clever mask. There are loads of scenes where I had to not really show my face. I probably shouldn’t say this! Because we had to film but I wasn’t allowed to wear make-up because my skin looked like I had the measles! It was a little bit scary! But it was fine. I didn’t care: ‘Get the make-up on’; ‘No we can’t.’ When my skin was good again, I was back. Back in my make-up, sweating away, loving it, for my art!"

Your character has no dialogue - was that a challenge for you?
"It wasn’t really a challenge, it was just fun. It was really fun. Hopefully this is going to be in the DVD extras: Jake was really cool with the zombirds. Obviously the main characters - Danny Dyer and Noel Clarke and everyone - they create the storyline, but he really wanted the zombirds to have their own characters and not just be zombies. They’re not actually zombies because they’re not dead. If people are going to get pedantic - and I’m sure a lot of people will! - we’re not really zombies. We’re zombirds. So we still have some functionality.

“And Jake was really cool about this and he actually set up zombie boot camp before we went filming. We had to think about our characters. I was Snipper so okay, she was a hairdresser: what kind of a woman were you? So everyone had to think about who they were before they got the infection. I said well, I was probably a bit of a flirt, probably slept with a few of the husbands that came into my hairdressing salon because it’s a small town and she’s very bored. 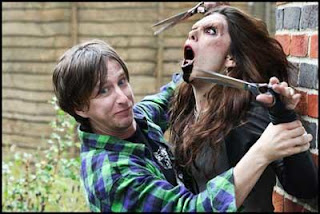 “So I tried to make my movements a little bit slinky, suggestive, a little bit slutty. Everything with an S: the Snipper has scissors, she’s a bit sultry, slinky, snaky. All the S’s were words that came into my mind when I thought about my physicality. Lots of wiggling of my hips and that sort of thing. I thought about how I moved. Sometimes I’d get twitchy, I’d get angry. If I can smell a man coming then my scissors start twitching very excitedly. Little things like that I put into the character. So yes, it was a lot of fun. But next time I do want some dialogue!"

Have you seen much of the film yet?
"No, it’s really frustrating. I keep getting press and PR people e-mailing me saying, ‘We’ve seen the film, well done’ - I haven’t seen the bloody film yet! We’ve got the cast and crew next week. The only bit which I have seen is when Jake asked me to do ADR: additional dialogue recording or something.

“And that’s really embarrassing because you have to watch yourself on a big screen and a white line comes across your frame. As soon as the white line comes across the frame, you then have to synch to whatever you see on the screen. So if you see yourself growling, you have to go, ‘Grrraaagghhrr!’ like that, in the studio. And I was doing that for about an hour: screaming, growling, grunting, barking maybe at some point! I’ve seen those clips and it looked really good."

I was surprised to see that this is your first film for a couple of years.
"I think the last thing was Evil Aliens. To be honest with you, I am more of a presenter, that’s kind of been my career. While I do love acting, all the acting I’ve done has kind of been spin-offs from presenting about horror. I don’t go out on castings, I don’t have an acting agent so a lot of the time it’s people that I know who want me to be involved in a horror movie. So I don’t get many films unless people want me to be in them, but if they do I love it. But I’ve never actively pursued it to be honest with you." 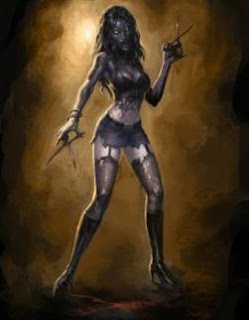 Have you got any other films lined up?
"There is one that’s on the IMDB right now called The Reverend. I’m supposed to be doing that with Doug Bradley and Tom Savini and people which would be amazing. As far as I know they’re trying to finish getting funds in place. And that’ll be a lot grittier, a lot more of a gritty role. And I’m hopefully doing something again with Alex Chandon but that’s in the future at some point. It’s very frustrating, the whole funding thing here. Doghouse is now a proper release. There was a time when I didn’t even think it was happening. Concept art was being thrown around, scripts were being thrown around, I went to endless investor meetings. You don’t know it’s happening until it’s happening, even on a big budget film. It’s a long process unfortunately.”