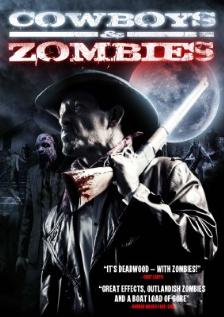 I’ll be honest: I expected a low-budget film called Cowboys and Zombies to be cheesy. Cheesy doesn’t necessarily mean bad, but it rarely means good.

However this impressive film defied my expectations and proved to be not just good but frankly terrific. And not cheesy in the slightest. Well, maybe a tiny bit near the start. But no, let’s be honest. Cowboys and Zombies is not only a good zombie movie, it’s actually a good western too. And like all right-minded people, I love a good western.

David Lockhart (who starred in two Crow fanfilms) is Mortimer, a bounty hunter who is introduced to us in an opening shoot-out. Although I’m never a fan of starting a film with an action sequence because we don’t yet know or care about any characters, we can at least surmise who we should be rooting for. Yes, he’s got a black hat but he’s considerably better-looking than his opponent so he’s either a hero or an anti-hero. He’ll turn out to be a bit of both.

Mortimer is a bounty hunter for financial reasons; not greed but because he needs the money for a good purpose (which we find out later). The next assignment he takes on is tracking down Brother Wolf, an Apache who is wanted for the rape and murder of a white woman.

Displaying a gloriously amoral approach, Mortimer buys a blonde from a guy (Colin Hussey, who did a voice for a Next Gen video game) who is trying to make an honest buck by transporting young women out to the west and selling them as wives (or, if that fails, whores). This is Rhiannon (Camille Montgomery) who is a feisty, independent spirit but Mortimer doesn’t care. He takes her out to a location where the redskin might be, ties her to a peg in the ground and retires to a distance, leaving Rhiannon there like a tethered goat. (The IMDB calls her Rhianna but it sounds like Rhiannon on the film so that's what I'm going with.) 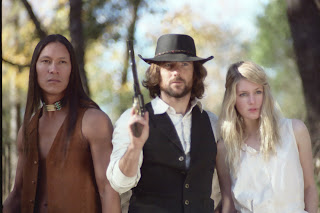 When Brother Wolf turns up we can instantly see that this won’t be a western of black and white morality but nor will it be a modern, apologist, revisionist western. Writer-director Rene Perez isn’t interested in cowboys’n’Indians, he’s interested in this cowboy and this Indian: fully rounded characters and individuals. (Brother Wolf is played by strapping actor/model Rick Mora who is of genuine Apache descent and had a tiny role in a flashback sequence in Twilight.)

The bounty is payable on bringing in the Injun alive and Mortimer takes him prisoner but only after a well-directed, well-choreographed fight between the two. Without making a fuss about it, we can see how Perez sets up the white man’s semi-formal fisticuffs against the red man’s more freeform fighting style, telling us a great deal about each character.

Characters, as I believe I have noted in other reviews, are defined by their relationships with each other and Cowboys and Zombies does a cracking job of working and melding relationships to reveal, define and explore character. But first there’s the little matter of zombies.

This is the slightly cheesy bit. A couple of prospectors discover a green-glowing rock and take it back to town where the townsfolk gather round to unwisely watch one of the prospectors try to smash the thing open with a pick-axe. Unsurprisingly, this cracks the ‘rock’ open releasing a cheap, computer-animated sparkly green gas which before long has turned everyone into lurching mutants with distorted faces and a tendency to chomp down on anything living. Zombies basically, although obviously the word is never used. 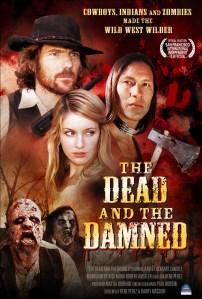 On the way back to town, Mortimer, Brother Wolf and Rhiannon encounter a rival, German bounty hunter (Austrian bodybuilder Robert Amstler, who was Arnie’s body-double in Terminator 3) and we get another shootout during which the first zombie appears and this is what I mean about character and relationships because there are so many relationships pointing in so many directions here. Mortimer and ‘The German’ are fighting over possession of Brother Wolf, who must be kept alive. Mortimer doesn’t care about Rhiannon and expects her to leave because, having served her purpose, she’s free to go. But she feels a responsibility towards Brother Wolf who showed her compassion when she was tethered.

Then you throw the zombie into the mix, advancing on Brother Wolf (who is now tethered himself) and Rhiannon. It’s an adroitly handled melange of connections between characters which goes much deeper then simple protagonist-antagonist. And all this while two cowboys are blasting away at each other and a zombie’s trying to catch and eat someone!

One of the things I really loved about this movie was that characters behaved realistically, sensibly and consistently. Arriving in the deserted town, and now fully aware that it is in both their interests to collaborate, the two men decide to hole up in the hotel with Rhiannon. Which leads to probably the film’s most memorable sequence as Rhiannon is stalked by a blind zombie, a hideously deformed once-was-woman tracking its prey by sound (brilliantly played by Lauren C Kelly). This is a fantastically clever and tense sequence and worth the price of admission alone.

With a small principal cast of solid actors, effective use of a standing frontier town set, and skilful direction that manages to be clever without pretentious, plus a well-honed script that doesn’t waste a word, Cowboys and Zombies is great viewing. Exciting, sometimes scary, never silly or self-indulgent and a commendably taught 82 minutes. If the camera-work sometimes betrays its video origins, that’s not enough to distract from an overall impressive B-movie. 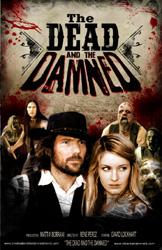 The pace is perfectly judged, moving from deft action scenes (including an audacious ‘first-person-shooter’ sequence!) to characterisation, notably a confessional scene between the two men which feels like so much more than two guys sitting on chairs telling each other about their lives. We find out why Brother Wolf really has a bounty on his head and why Mortimer really needs that money and both revelations add to our understanding of who these men are and why they do the things they do.

Perez, Amstler, cinematographer Paul Nordin, co-writer Barry Massoni and producer Mattia Borrani are part of a music/film-making collective called iDIC whose other movies include martial arts actioners War Machine and Ninja Warpath (the trailers for which, to be honest, look completely interchangeable). Most recently Perez has directed vampire feature Obsidian Hearts. Ed Martinez (Black Devil Doll, Death Row) supplied the imaginative make-up effects. Originally called The Dead and the Damned, the film was retitled for its UK release to opportunistically cash in on a certain Harrison Ford picture.