When Jeff Brookshire contacted me in July 2006 about his nearly completed zombie epic Awaken the Dead, I knew that I had to find out more. Fortunately, Jeff was very definitely up for answering one of my 6Q mini-interviews.

Why does the world need another zombie movie? What does your film bring to the genre?
“Does the world need another zombie movie? Yes. The world need more movies in general. But any film, providing that it is well done, is always welcome. Zombie films are like westerns. They are gritty, generally desolate and emulate an apocalyptic world where there is no law and order and men/women live and die on their own merits. It all boils down to people at that point. Not money, nor social standing, nor your past but who you are, stripped of all of life's extras.

“Our film is really a dark comedy and an action film masquerading as a zombie film. You won't find hundreds of gallons of blood and arms crawling by themselves. You will find laughs, action, a well crafted tale and the undead. (We do, of course, have a couple of gross-out scenes but they are as funny as they are gross. Hint: one of them involves a blender.) So any original story is always welcome in my book.”

To what extent does the character of the priest reflect your experience/knowledge of the priesthood as a minister's son?
”The priest? Autobiographical? Yes and no. Really, I needed a defining weakness for my protagonist and guilt was what leapt to mind. The Catholic Church is notorious for laying on the guilt and a priest seemed the perfect counter part for a man who used to be an assassin. Plus, it was cool. It's about a man losing his place in the world and struggling for redemption. That, I think has happened to most of us. (And if it hasn't, you're not trying hard enough!) It's impossible to write and not leave an aspect of yourself in your main character. A character has to be real in order for the audience to relate to him at all.” 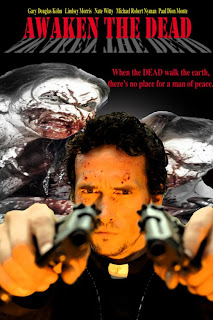 How did you assemble your principal cast and crew?
“We looked everywhere. We ran ads, contacted agencies, went through friends... you name it. The beautiful thing about living in the LA area is that you are surrounded by actors and crew. The tough thing is picking the right ones and finding the right ones within the limitations of your budget as well. Paul Dion Monte is a friend of mine. We met on the set of another film that I wrote but did not direct and hit it off. I basically wrote the role of Nick the marine with Paul in mind. Putting humour and action together is not easy but he handled it well. They all did.

“Paul was also instrumental to bringing pro bodybuilder Big Will Harris in as Grin. They both work out at Gold's Gym in Venice Beach. Nate was a natural for Stanley the Jehovah's Witness and easily stood out during the auditions. Lindsey was also an easy fit for Mary. Christopher, the priest, was the toughest to cast but Gary was the perfect person to play him. Gary's a Johnny Depp type: subtle, well thought out and always acting with intelligence and humour.”

And where did you find all your zombies?
“The zombies were tougher because we had to find so many. They were troopers. Patrick Zook, who was in Napoleon Dynamite, flew in from Iowa on his own dime just to be made up as a zombie and shot in the head. Mads Koudal, who is actually an established actor in his country, came to LA from Denmark to be mauled by a blender. We used the internet and word of mouth to generate zombies. I even set up a booth at career day at a local college to recruit. Whatever it took. We ended up with a hundred and twenty or so but could have used even more. Feeding them became its own logistical nightmare!”

How has your background in comics translated to your film work?
“I storyboarded most of the movie. And they looked just like comic frames. The parallel between a comic frame and a movie frame is unreal. You have angles, perspective, light and shadow, depth, distance and motion in both. It allowed me to set up the shot on paper first and then figure out what would go next. Essentially, it allowed me to edit before we even shot. For example...”

How important is music to the film?
“Music was very important to me. In fact, I had my bands and my composers in place before I even cast the movie! I had a 'sound' in mind to fit the 'feel' of the film and these bands were handpicked by me very early on in the pre-production process. Music is easily 30 per cent of the movie. Ash and Nathan of Edible Clowns and the Gentle Fracture and I were in constant communication. They are also two of the biggest fans of the movie. I very much loved the way some movies like The Crow, The Matrix and Desperado so smoothly integrate music into the film. I wanted the movie to be fluid in story, editing and music. In fact, Frank Stallone was at one of our private screening and was one of several people to tell me that we needed to put out a soundtrack. Everyone loved the music.”