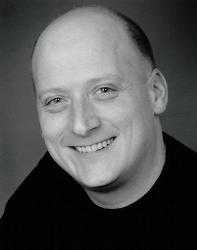 How did you get involved with Neil Jones and Stag Night of the Dead?
“One of my first short film credits was Neil’s debut film Zero Tolerance back in 2004. In truth, I only applied for the role because it was local to me and I’d had a couple of bad experiences where filmmakers hadn’t paid me my travel expenses so I figured worst case scenario, I’d only be out of pocket for the bus fare. The shoot was a lot of fun and we got on really well and I’ve ended up being involved in all his projects since (two further shorts and two micro-shorts).

“He sent me the script for Stag Night of the Dead in November 2006 and said he wanted me to play the role of Number 48. I loved the script and foolishly said to him, ‘If there’s anything else you need me to do, let me know.’ Nearly five and a half years later and I’m still working on the bloody film! Over that time I’ve been involved with the script development, casting, was 1st AD on the shoot, worked on the website and have been running the online marketing campaign pretty much since we finished shooting. It’s been a lot of hard work but a lot of fun at the same time.”

How would you describe your character ‘Number 48’?
“Neil recently referred to Number 48 as a ‘psychopathic and schizoid soldier’ and I’d say that’s about right. He’s the head of security at a remote military base which is being used to house the victims of a recent pandemic which has turned them into zombies. However his true intentions only become apparent towards the end of the film.

“The character of Number 48 changed quite a lot from the original script. Initially he was a hybrid – part zombie, part human – but this was ditched for a number of reasons, not least of all because as 1st AD I kept cutting my scenes so we could get some of the other stuff shot. That probably explains the angry look you refer to in your review! It was actually a tough job juggling the two roles – 1st AD and actor – and not something I’ll do again.”

What was the hardest part of making the film? And the most fun part?
“Getting the sodding thing finished! With hindsight, it was probably too ambitious a project to attempt as a first feature on such a low budget. I have no idea where IMDb got the figure of £150,000. Take a zero off and you’re a lot closer to the real cash budget. There were a number of things we had to change as we were going along because they just weren’t working. We totally rewrote the ending and had to get all the cast and crew back for another round of shooting. Whilst the base up at Bentwaters is a brilliant location to shoot at, it’s also in the middle of nowhere so getting everyone back was problematic. 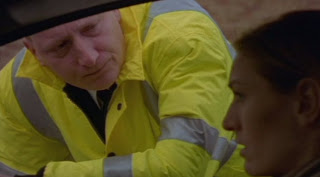 “We also spent a hell of a lot more work in post than we’d envisaged. With all of the special effects shots (nearly two thousand), we ended up trashing three computers along the way and had a near catastrophic hard drive failure which led to an expensive data recovery bill. For me, the best part has been the reaction to the film. The love and support we’ve had from fans of the film and, ahem, most reviewers has made all that hard work worthwhile.

“We often refer to it as a Marmite movie – some people will love it, some people will hate it. Often the very reasons someone doesn’t like the film (the strong language, the grindhouse look of the film, the laddish humour, the laser guns) are the exact same reasons someone else loves it. The intention was always to make a different kind of zombie film and, on the whole, I think we achieved that. Yes, it has its faults and it definitely won’t appeal to everyone but, as your review says, it’s a satisfying film to watch with your mates over a few beers and a pizza and that’s kind of what we were aiming for.”

What’s your own favourite zombie film?
“Back in the early '80s our family got a Betamax video player and my Dad bought home this list of films from work that we could rent. I remember sitting down with my sister and ticking off the films we wanted to see; stuff like Watership Down, Superman, The Rescuers, Candleshoe and the like and each Friday Dad would come home and say, ‘Sorry, that film’s out but I got this instead,’ and would put Friday the 13th or Halloween or The Evil Dead in the video player so my early teenage years were spent watching horror films. It affected us kids in different ways. My sister discovered God. I discovered masturbation.

“It was only whilst making Stag Night that I realised how few zombie films I’d actually seen despite this early introduction to horror so I’m kinda playing catch-up now. I’m ashamed to admit I’ve not seen a Romero film all the way through. I’ve caught most of Night of the Living Dead and Dawn of the Dead but never finished them. Of the recent films, Shaun of the Dead is right up there, of course, and I have to say I’m a sucker for Dead Snow. Yes, it’s cheesy but that’s part of the fun! Deadheads is another favourite of mine and I had a great time having beers with those guys at FrightFest last year.

“Just realised they’re all zom-coms so, to try to win back some zombie points after my Romero admission, I’ll say Rammbock (aka Siege of the Dead) is probably the best zombie film I’ve seen. Really well shot, powerful narrative and great performances. Plus it has subtitles so that makes me feel all sophisticated‘n’stuff.”

What challenges were involved in playing a naked German cinematographer in Hardcore?
“The strangest thing about Hardcore is that it just didn’t dawn on me until the first day of shooting that I’d be stark bollock naked for the whole thing. Mark had sent me the script and I thought it was the funniest thing I’d ever read – absolutely my kind of daft, risqué humour. I remember reading it on the tube on my way to the audition and laughing out loud for the whole journey. People were giving me the oddest looks as I was reading this script with ‘HARDCORE’ in big, bold letters on the front. 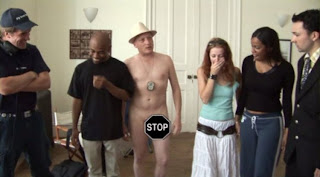 “I did this over-the-top performance in the audition which involved a lot of lunging and hamming it up and can remember the casting panel all laughing and I was pretty much offered the role there and then. We did a cast read through in London a few weeks before the shoot but, for some reason, it still hadn’t sunk in.

“I guess it was only when I got on location and saw the call sheet that the penny dropped. Randolph Gerbles’ costume for day one was ‘Hat. Light meter.’ At that point, I had a bit of an anxiety attack. Bearing in mind I was going to be spending the next five days surrounded by attractive and often naked women with nothing more than a sock (a very large sock, I hasten to add) to cover my modesty, my mind went blank. I remember turning to my good friend Bruce Lawrence and saying, ‘I just hope that it’s only my acting that’s wooden.’

“In the end, it actually wasn’t that bad. I spoke with Mark and we agreed that we wouldn’t let any of the cast see me ‘in costume’ until Randolph’s first – ahem – entrance so the reactions you see in the film are genuine. Once that was out of the way, my inhibitions went out of the window and I felt pretty comfortable wandering around naked for the rest of the shoot. In fact the rest of the cast kept begging me to put my clothes back on, particularly when we went to the pub for lunch.” 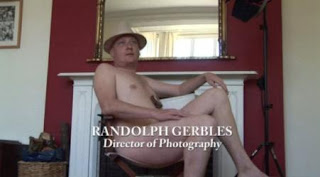 What other projects have you got coming up?
“Well in between being the public face of SNOTD online, I’m working on a screenplay for a project I’d like to start shooting later in the year. It’s a straight horror which I’ve likened to Fatal Attraction meets Saw. Still in very early stages of development but I think it could be a lot of fun. Neil and I are also batting around ideas for Hen Night of the Dead, which I know you’ll be very pleased to hear...

“I’ve got a few corporate gigs lined up over the next few months but, apart from that, not got a lot in the pipeline so if there are any directors out there who want to give me a job, feel free to get in contact just so long as the job doesn’t involve me wearing a sock on my cock. Again.”