When I visited the set of Pumpkinhead III in April 2006, I was able to catch up with Doug Bradley, whom I had not seen since the filming of Archangel Thunderbird, many years earlier. Part of this interview was used in my Pumpkinhead III set report for Fangoria. 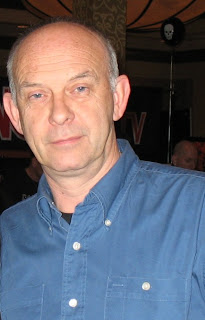 Are you doing this as a return favour for Lance Henriksen having been in one of the Hellraiser sequels?
"No, not really at all. I don’t know whether Lance did Hellworld as a favour but for me it was an absolute delight that he was in Hellworld because he’s been a hero of mine as an actor for a long time. I didn’t know, when I was first approached about this, that Lance was going to be in it. So no, it’s not a return favour but it’s an absolute delight to work with him again. We’ve met this evening again for the first time, apart from a couple of handshakes at signings and conventions, since Hellworld which we wrapped three and half years ago. So it’s great to see him again. But we barely have any contact in this movie of course because he’s a ghost and I can’t see him."

But I suspect you’ll both be on the DVD sleeve.
"I hope so, but that’s for other people to decide!"

What attracted you to this project?
"I had seen the original Pumpkinhead a long, long time ago and liked it, so I was intrigued by that. I was aware of Jake West’s work. I met Jake last winter, November/December time, at Cinenygma, the Luxembourg Festival. Jake tells me that he had talked to me then about a script that he was looking at and he thought there was a part that he would be interested in me looking at. But I had forgotten that conversation completely so that was not part of my reckoning.

“They sent me the script which I really liked. Then I heard that Lance was coming back to reprise Ed Harley so everything was dropping into place. I was offered it and I was delighted to say yes, delighted to come back to Romania and to Castel. This is the fifth movie I’ve made with Castel here now and I would never, ever hesitate to come back again. I always have a great time working here. Well, actually I tell a lie. It’s probably the fourth. We did the two Prophecy films back to back; although I appear as a photograph of a corpse in Prophecy IV, I’m technically not in it! 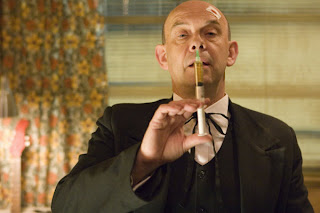 “When I got this script, I liked it straight away: a very cleverly written script. It’s very, very fast-paced, it’s almost like an action movie meets a horror film. Certainly for me, I’m having a lot of fun here. I’m operating on living people, I’m running a little bit of a black market in organs and body parts, I’m in a car crash, I survive a burning church with a burning reverend and Pumpkinhead bursting his way through stained glass windows. I get knocked through a plate glass window here at the Sunny Days Motel by Pumpkinhead, then I survive the motel getting blown up. I get hurled thirty feet into the air - or my stunt double will. I survive all of those things before a final encounter with Pumpkinhead. It’s a fascinating character for me, a really, really interesting character."

So who is Doc Frasier?
"He is a respected, small-town doctor who absolutely has the trust and the confidence of all the people in the town. What they don’t know is that he is harvesting organs and skin from the deceased of the town and selling them. His rationalisation is that he’s doing it because the people are too poor to be able to afford the level of healthcare that he gives them. So he’s doing this to subsidise their healthcare. Now at the same time there’s a little problem with the ovens at the crematorium which are not working so they’ve been sinking the bodies into the bogs and the swamps out in the woods and piling them up in barns behind the crematorium when they’ve finished taking what Doc wants from them. But unfortunately they’re treading on Haggis’ territory and upsetting Ed Harley in the process. So that’s where Doc’s world meets Pumpkinhead.

“He is an extraordinary character - you can see by the way I’m dressed. When I read the script, I could kind of see Robert Mitchum in Night of the Hunter. But I thought: I won’t be dressed like that so forget that immediately. But when I got here, that’s exactly the costume that I had, it’s exactly the beat that Jake had come up with as well. It’s very, very rare that that happens. So that was great. So his dress is normal. He lives in the twentieth century. He drives a car, as you’ve just seen. But his consulting room is like something out of Edgar Allan Poe. He’s obviously, somewhere in his head, living in the nineteenth century, still using quill pens to write with. So he’s a fun character to play and I hope that I’m doing him justice. I’m having a lot of fun with him."

How are you finding Jake as a director?
"Jake is fine. I’ve not worked with him before and obviously some Fango readers will be well familiar with this story: we are under pretty severe money and time constraints so it’s move move move, fast fast fast. So the energy on set has to be high and quick and good and that has to come from the director down - and Jake is driving the car hard. It’s going well and I’m having a good time working with him."

With doing these back-to-back sequels in Eastern Europe, which seems to be the current trend...
"It seems to be, doesn’t it? I seem to be locked into it!"

Is there a noticeable difference from where you’re sitting or is it all just clever accounting?
"I assume it’s the latter. It’s always about accounting, isn’t it? But no, I don’t think that’s materially affecting the stories or the scripts. Whether you’re doing one movie or four movies all in one go, you need one good story or four good stories. It’s all about good stories. Pumpkinhead IV I know nothing about because I haven’t seen the script but certainly this is a very strong story. I’m content with my half of the saga here." 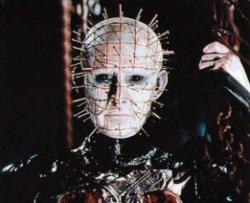 I know you’re asked this all the time but: will we see Pinhead again?
"I keep seeing him here: every time I come out of my dressing room there are Deader and Hellworld posters in the corridors, here at Castel. So he ain’t letting me go just yet! Will there be another movie? I have no idea. I just straight don’t know, Mike. Nobody has told me we’re finished and nobody’s told me we’re going again so it would be stupid of me to conjecture beyond that. It’s going to have to come to an end at some point, but whether we’re done or not? No idea."

Do you prefer a role like this where you’re not under all that make-up?
"There’s a lot of fun, as I say, with this Doc Frasier character. There’s certainly a relief in spending ten minutes in the make-up chair as opposed to three hours. They’re completely different jobs. If you’re playing the kind of Pinhead or Lylesberg roles that I’ve done with make-up, then that’s the job. You deal with the job as it is. Obviously there are always constraints. You just get fed up carrying the make-up around all day. Never in front of the camera; I’ve always said, when you’re in front of the camera with the Pinhead make-up on you forget about it. You’re working, you’re acting - that’s what you’re there to do. It’s when you’ve got two or three hours in the day or the night to kill, you just start to go slowly out of your mind.

“But I’ve had a great deal of fun playing Pinhead as well and I’m certainly not at any point where I’m making a decision where I will never do either Pinhead or AN Other full prosthetic make-up again. I enjoy doing that. It’s a challenge and there’s a delight in carrying off that kind of portrayal of performance, which is completely different to ‘regular acting’, if I can use that phrase."

Have you got anything lined up after this?
"Well, we’re full speed ahead back in England with the sequel to Dominator. I was back in London last weekend and sped down to Brighton to spend a day with Tony Luke catching up with what’s going on there. Simon Morehead, who has just produced Mirrormask with Dave McKean and Neil Gaiman, is producing. So it’s all systems go. As soon as I’m back in London I’ll be riding the rails from London to Brighton and back again two or three times a week and that’s going to keep going through most of the year. I have conventions coming up and I have two or three scripts to look at and think about when I get home. So it’s going well at the moment."

What’s the latest on Frazer Lee’s Urbane. Are you still attached?
"I’m very much attached to Urbane. It’s just all about money, is all. Everything is there and in place. As always with this it’s one step forward, two steps back, three steps forward, four steps back - and you lose track of where you are in relation to where you started. But fingers crossed it will come to fruition sooner rather than later. Because it’s a really good script and Frazer and I have some other projects which we would also like to develop but I think we feel maybe we need to get Urbane out of the way first. But at the moment the money isn’t there so at the moment it’s not happening.”