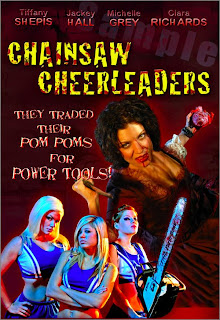 Some films significantly fail to deliver what they promise - misleading marketing campaigns, inappropriate titles, nonsensically unrelated poster designs, we’ve all been there - but you can’t fault Chainsaw Cheerleaders on that score. There are cheerleaders. They have chainsaws. Tick, tick.

The acting is variable, the plot doesn’t make a great deal of sense and there are distracting continuity errors but these deficits are more than made up for by slick direction, good dialogue, great sound, commendably brief usage of gore and nudity which doesn’t distract from the action, an original story, interesting characters and a decent cast which includes the always marvellous Debbie Rochon and the eminently wonderful Tiffany Shepis.

A prologue is set in ‘Europe, 1508’ and I’m sorry but I don’t know Don Farmer well enough to know whether that caption is meant to be as funny as it is - but since the whole film is by necessity somewhat tongue-in-cheek, I’ll give him the benefit of the doubt. La Shep is a witch named Lucinda, torturing a young woman in an attempt to conjure a demon or open a portal or whatnot or something. The victim is pegged out on the ground and our first problem is that she has a really thick Californian accent. Tiff’s accent is fine, suitably non-specific, and the same is true of the two witch-hunters/monks who turn up to stop her. But the victim is straight out of Malibu. Also, she’s wearing a sleeveless top and has her arms held wide so that we can see... look, a lot of European women still don’t shave their pits today. It’s a careless point which is distracting (though not as much as her accent) but could have been easily solved. I’m not suggesting some sort of armpit-merkin, just sleeves would have been fine. 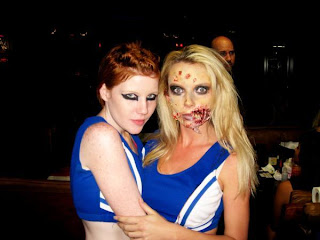 Anyway, Lucinda has some sort of demon-snake-thing which looks like a cross between an eel and a small graboid: all black and smooth with a three-part jaw. It’s not really explained what this is or what part it is designed to play in the invocation. When the witch-hunters turn up, they grab Lucinda and it’s not entirely clear what happens next. There’s a sort of swirly, sparkly effect and she either escapes through it or is pulled through it. Anyway, she disappears from 1508-vintage Europe. It’s not clear what happens to the demon-snake-eel-thing or whether the valley girl victim has suffered in any way.

Jump forward 500 years and we find high school student Sally (Erin Bushko: Skin and Bones) browsing a shop full of goth/hippy accoutrements for suitable props which might enhance her performance as Lady Macbeth in a forthcoming production of the Scottish play. Purple-haired, multi-pierced shopkeeper Angelique (Harmony Xanix) comes on to Sally, then starts talking about how she needs her blood to resurrect the witch Lucinda and before she can get away, Sally is grabbed by a silent, beefy bloke (Rudy Ownbey, who also played one of the monks although I’m not sure if that’s meant to indicate some sort of reincarnation or is just efficient casting).

This is slightly misleading because Sally is almost incidental to our story (and it is unfortunate that a scene this early contains the film’s weakest acting). Eventually we meet our main protagonist, troubled goth teen Dawn (Michele Grey: Plague of the Damned, Unspeakable - who also gets hair, make-up and associate producer credits). She argues with her mother (Susan Delmonico - writer/director Don Farmer cameos as Dawn’s non-speaking father) and is shocked when her best friend Ciara (Ciara Richards: Demon Sight, Dorm of the Dead - it’s pronounced like ‘Sierra’) claims that Dawn’s boyfriend is cheating on her.

The boyfriend is skinny goth Dax (Christopher Shaw, who also gets a ‘grip’ credit) whom Dawn discovers arm in arm with BBW Autumn (Emma Paduraru) and promptly decks with a headbutt. There’s a continuity problem here with Dax’s sunglasses; looks like they realised that they would get broken so in some shots they’re on his face, in others they’re in his hand. But that’s nothing to Dawn’s heavy-duty eyeliner which is smeared to indicate emotional, tear-filled moments. Unfortunately, both here and later in other scenes, the make-up goes from fine to smeared and back so often that I began to wonder whether this was a deliberate gag like Marty Feldman’s movable hump in Young Frankenstein. 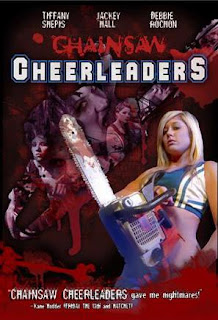 Exasperated by their daughter, Dawn’s parents take her to psychiatrist Dr Lacey (the justifiably ubiquitous Debbie Rochon who for some reason is not listed in the end credits, though she is in the opening credits and credit block). The shrink’s recommendation is... cheerleader camp.

And so we are introduced to our three cheerleaders (this being an incredibly small ‘camp’): blonde bitch Bambi (‘model/spokesperson’ Misty Marie), blonde bitch Jessica (bikini model Rabecca Lee) and blonde bimbo Chassy (Jackey Hall: Swamp Creek, Dorm of the Dead - who also produced). With her short, red hair, skinny physique, cynical attitude and heavy (if mutable) eyeliner, Dawn is completely out of place and of course looks massively uncomfortable when she dons her cheerleader outfit. Heather Hansen (Lord of the Dead) appears briefly as butch Coach Calahan but then disappears from the story.

Naturally the blondes don’t want Dawn there any more than she wants to be there although there is no outright hostility between them. To raise funds for their minimalist cheerleading team (it’s not really a ‘camp’ in any sense) they have to sell magazine subscriptions door-to-door. I can only assume, from my transatlantic perspective, that this is a common practice among young people involved in such activities although it seems odd that the four young women set out to do this unencumbered by either any means of recording completed sales (nowhere to conceal a notebook in those skimpy outfits) or indeed, any sample magazines.

One of the local houses, which the blondes pretend is haunted although it isn’t, is home to Angelique (remember her) and her hulking male assistant. From the doorstep, Dawn spies a large bag inside the house which seems to contain a body, with movements indicating the person inside is still alive.

From hereon everything becomes a bit more confusing. Lucinda appears from the previously seen swirly, sparkly effect, kills Angelique and then possesses Bambi who from then on intermittently spouts a demonic, horned forehead. Dawn acquires a chainsaw from somewhere and, when pursued by Angelique’s accomplice, slices him vertically in two. 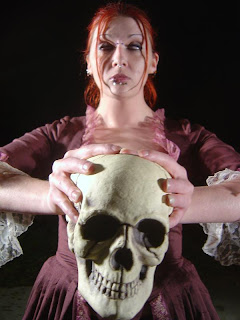 What I really don’t understand is why Lucinda-Bambi then sets out to kill both Dr Lacy and the unfaithful Dax. The Doc, whose rape-fantasy role-play session with a masked boyfriend (the amazingly prolific Jim O’Rear: Psycho Beach Party, Star Trek IV, Vampire Wars, Skarecrow, Wolfsbayne) ends in dissatisfaction later indulges herself with a little self-gratification. But the demon-snake-eel-thing appears in her house - for some reason and in some way - so that when she reaches for a vibrator she picks up the evil thing without realising it until it’s well inside her. This is an original and ultimately splattery demise which benefits from top-notch effects, as indeed does the CGI demon-snake-eel-thing itself. I just wish there was some explanation of what it is and why it’s there.

Two cops (Chris Henshaw and Dan Demic) subsequently come looking for Dawn to see if she knows anything about Dr Lacey’s death. They also show up at Dax’s apartment where he and Autumn are lying in a pool of blood, just after Dawn arrives carrying her chainsaw. But it was really demonic Lucinda-Bambi who killed the cheating couple and she returns and kills the two cops too.

What I can’t fathom is what Lucinda-Bambi is trying to achieve or indeed how she even knows about Dr Lacey and Dax, neither of whom has any direct connection with Bambi. Since all three of the deceased had wronged Dawn in some way, it seems that Lucinda-Bambi is somehow taking revenge on Dawn’s behalf - but why would she do that, even if she knew who these people were (which she doesn’t, although there seems to be a deleted scene of Dr Lacey in Angelique’s shop which might provide some hidden motivation). She also rips Jessica’s face off for some reason, leaving Dawn and the not-so-bimbo Chassy to stand-off against her in a bar where the demon takes a waitress (Amy Dianne) hostage and demonstrates some magical teleportation abilities.

It’s a curious thing that the direction and the sheer fun of this film allows one to enjoy the story and even find the conclusion satisfying while the actual plot makes no sense. At the end the swirly, sparkly time portal thing appears again and one of the monks turns up to drag Lucinda back to the 16th century. How? Why? Who knows? Who cares? Chainsaw Cheerleaders is fun and that, really, is all there is to it. 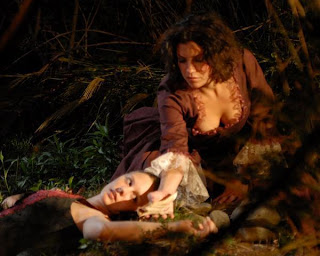 Anyway, Chainsaw Cheerleaders very definitely does not do this (and this is the ‘unrated director’s cut’ - although I’m not entirely sure what an unrated director is) which earns it another notch on the MJS rating scale.

Bill Schweikert (credited as ‘William Schweikert’ at the end where he is listed as both DOP and camera operator) does a great job, giving the film a really professional look, especially during the night-time scenes. Michael D’Anna (director of the previously mentioned Side Sho) edited the film while the sound was recorded by Mark Williams and Earl Hoffert. Person or persons named ‘Grandfather Spell’ is credited with the music, with additional music by Kevin McLeod. A band called House of Flies performs in one scene. 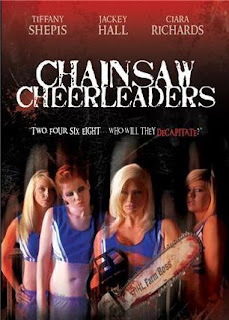 If the Inaccurate Movie Database is to be believed, this is Donald Farmer’s 22nd film in 22 years (not counting the extra scenes he shot for Mark Bender’s Deadly Run in 1995). Several of the cast, including Tiff, were in Don’s previous feature Dorm of the Dead where Jackey Hall had such a grand time that she subsequently badgered Don about making another movie. He jokingly promised that they would make one as soon as she found the production budget so Ms Hall went off and came back with property developer Don Babb on board as executive producer. (It’s amazing how many indie films are bankrolled by people who have made their money from property.) After considering a script called Stripper Ripper, Babb plumped for Chainsaw Cheerleaders and the film was shot in Georgia in Autumn 2007.

I don’t know what Stripper Ripper might be like and I’ve not seen any of Farmer’s previous films. On the basis of this one, he’s got the direction down fine but could benefit from a more coherent script. This one has great scenes but the overall story just doesn’t hold together. The cheerleader stuff works fine but Lucinda is really just a generic, supernatural threat without clear motivation or purpose. We don’t know what she’s trying to do and yet she is clearly trying to do something. And that never-explained demonic eel-beastie still has me scratching my head.