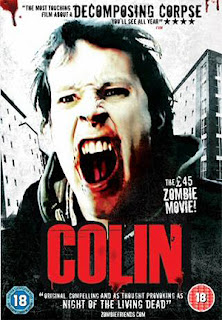 Colin is not the first zombie film to make an actual zombie its protagonist but, like its most obvious precursor, Andrew Parkinson’s I, Zombie, it is a bleak, grim, depressing and hugely impressive film

I was worried that this would tread similar ground to Andy P’s feature but it doesn’t so that’s the last mention we’ll have of I, Zombie except to note that, while the earlier film documented somebody turning into a zombie, Colin is actually about, well, a zombie. Our eponymous central character is an unthinking, non-talking, shuffling, shambling human body with a craving for flesh. As a famous Rocky Horror poster once said: he’s the hero; that’s right - the hero.

This is a film which takes a while to get going so bear with the first ten minutes or so in which Colin comes home, cleans a wound in his arm with bleach(!) and fights his infected flatmate before finally succumbing to the Romero-esque condition. He then spends the whole night trying to open the front door before eventually falling through the ground-floor window. And after this, we simply tag along with him as he wanders through the city.

Colin is a series of vignettes in a city where the living dead have almost taken over. Society has utterly collapsed but there are surviving individuals and groups of humans, some finally falling victim to the never-tiring ghouls, others establishing themselves in the remnants of civilisation. We meet a couple of chancers who mug lone zombies for their trainers and watches. We encounter Colin’s unaffected sister and her boyfriend. We spot a loner who nevertheless stops his car occasionally to help those in trouble by smashing their attackers’ heads in with a crowbar. And in possibly the film’s scariest sequence we visit a house where some young people’s ‘end of the world’ party has gone awry, the zombies having flooded into the house. (This feels like an homage to Cloverfield although I don’t know if that’s the intention.) 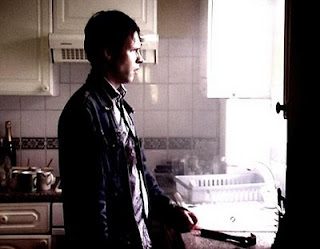 There’s a creepy bloke who keeps blinded, female zombies in his basement. And there’s a gang who know that the only way to deal with the undead is to destroy them and then kill anyone who got bitten in the fracas, no matter how much they plead for mercy.

And through all this wanders - well, shuffles - Colin, his medical condition worsening as his physical condition deteriorates. We follow him, we go where he goes, and if we don’t actually see this world through his eyes, nevertheless he is the closest we have to a guide.

Now, this might be all well and good but where can it go? A film must have a narrative: a beginning, middle and end. And this is where writer/director Marc Price really excels. Because the last act of the film is actually a prequel to what we have seen before. As Colin, having wandered round in a huge circle, shambles in through his front door we leap back to another time that he entered the building, before he succumbed to the zombie plague. We meet his girlfriend, we get some more background on what has been going on - and rather brilliantly, a whole bunch of apparently meaningless background details become relevant. This is clearly a film which will repay a second viewing.

Alastair Kirton is absolutely fantastic in the title role. Barely even grunting until that flashback third act, he gives the sort of wordless performance that comes along only rarely, allowing an actor to shine. Don’t misunderstand me if I compare this to Karloff in Frankenstein. With all respect to Kirton, he may yet turn out to be an actor of Karloff’s stature or he may not. That’s not the point. The point is that both actors were asked to make us believe in and sympathise with a lifeless, mute, shambling dead-alive body. For any actor that is both a tremendous gift and a terrifying challenge. One wonders if there are any members of Equity out there who turned this down like Lugosi declined the monster. (Interestingly, Kirton once played Henry Clerval in a stage production of Frankenstein.) 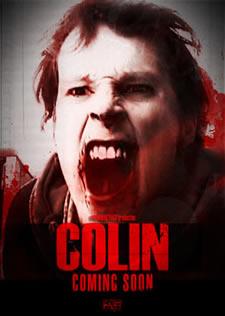 There is no credited production designer, which is odd but leaves one assuming that Price himself was largely responsible for creating the recently-deserted look of the streets and rooms. One very noticeable aspect of the production (and design is part of this) is that Colin is very, very British, to the extent that it’s extremely easy to believe that this is the same plague that we saw in Shaun of the Dead. Whereas something like The Zombie Diaries, good though that movie was, seems more specifically Romero-esque. Diaries could have been made in another country and not looked much different. Colin just wouldn’t work in most countries, certainly not in America. Maybe the Germans or the Aussies could have done something like this but it would, I suspect, have ended up as intrinsically German or Australian as this is British.

But nothing is perfect and there is one area where the film falters, which is the camera-work. For some reason, Price feels the need to shoot a lot of the scenes using a wobbly, handheld technique which simply distracts from the imagery, characters and story. Which is a shame. This is not part of the recent run of ‘found footage’ movies like the aforementioned Zombie Diaries or Cloverfield, [Rec] or Vampire Diary. There is no sense, in any scene, in which the camera is part of the action, so there is no reason to foreground the fact that we are looking through a camera by shaking it about.

Price owns a tripod, clearly, because some scenes are conventionally shot. And there are some parts of the film, primarily action scenes, where a shaky camera is justifiable artistically because it helps to create the pandemonium of, for example, the zombie-infested party. But there are other sequences, such as the kitchen-set opening, when this is gratuitous to the point of actually being annoying. Obviously this use of ‘shaky-cam’ is a stylistic decision by Marc Price but it’s over-used, inappropriately used and stops Colin from being the minor masterpiece which it could have been. 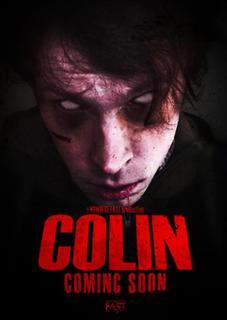 Kirton and Price previously collaborated on a short film called Midnight about three people thrown together in the build-up to a nuclear attack. Also in the cast are Tat Whalley (who played Rick Allen in a Def Leppard biopic and was in Russell Mulcahy’s little-seen Egyptian adventure The Curse of King Tut’s Tomb), Helena Martin (also in Darren Ward’s A Day of Violence and Stuart Brennan’s Zombies of the Night, making her one of the few actors with two British zombie films on her CV), Dominic Burgess (bit parts in Batman Begins and Doctor Who), Sarah Strong (who was in a short spoof called Fluffy the English Vampire Slayer), Ken Dirke (who played the title role in Jason Impey’s psycho feature Sick Bastard), Julia Eve (who was also in a couple of Jason Impey films) and Darren McIlroy (The Scar Crow). Michelle Webb was in charge of the make-up team, several of whom also worked on Stag Night of the Living Dead.

Colin is a terrific film and an absolute must-see for anyone with an interest in the British Horror Revival or curious to see how the zombie genre, which so often shuffles across the same old ground, can be taken into new directions.