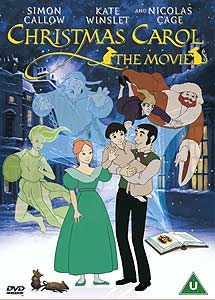 Much as I love animation, and much as I do my best to support British films, and even though the total number of British animated features ever made is only a dozen or so - nevertheless, I cannot tell a lie. Christmas Carol: The Movie is awful. Laden with potential, this could have been a great movie, or at least a fun movie - but it seems to be trapped in a mire of uncertainty and compromise which has rendered it merely dull. In fact, not just merely dull, but very dull indeed.

The story per se is reasonably faithful to Dickens, except that Scrooge is considerably younger and his estranged fiancée (who does actually feature in the book) is still around, running an alms house which turns out to be heavily in debt to Scrooge, thus bringing her back to him and leading to a romantic ending. As you can see, that’s a pretty big ‘except’ - and it’s not the only one. The film-makers have also introduced two mice, presumably because they think that any cartoon has to have cute animals. Deeply irritating, and with all the comic relief quotient of Jar-Jar Binks, these mice turn a film which would merely have been ‘not very entertaining’ into a real chore to sit through. 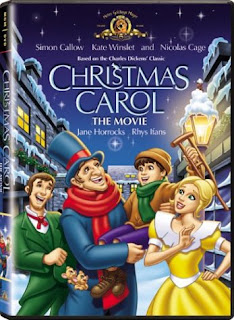 The film isn’t just dully written, it looks dull too, with a palette composed almost entirely of browns and greys. And there are songs, but really dull, forgettable ones. The whole is topped and tailed by a live action sequence in which Simon Callow, as Charles Dickens, reads his novel to an appreciative American audience (Callow also provides the voice of Scrooge). Thankfully, his false beard in these scenes is considerably more realistic than the wispy bit of string which clung to his chin when he played Dickens for the BBC.

There were two ways in which Christmas Carol: The Movie could have worked. One would be to go back to the original story - which is a ghost story, remember? - and make it a dark, scary film for adults, set in the disease-ridden world of the Victorian backstreets. There’s a version of the tale which has rarely, if ever, been presented. Alternatively, one could go all out for A Christmas Carol as it exists in the public consciousness, with the singing and the dancing and the laughing and so on.

This film tries to do both, but since they’re mutually exclusive, it ends up doing neither. From the former possibility we have the Callow intro sequence - which might reasonably lead one to expect a faithful adaptation - and the muted colour palette; from the latter come the songs and the mice. But even there the film falls between two stools. Rather than go for ‘cartoon mice’ or ‘realistic mice’ the designers have hedged their bets and created ‘semi-anthropomorphic’ creatures. They are drawn realistically (like the human characters) and don’t speak - but they do stand on their hind legs and adopt human poses, such as shaking their tiny fists when angry. So they’re not realistic enough to make sense, but not cute enough to be entertaining. What is more, since they are both the same shape and size, and only slightly different shades of grey, it is only halfway through the film when the two creatures meet that one realises there are two of them! 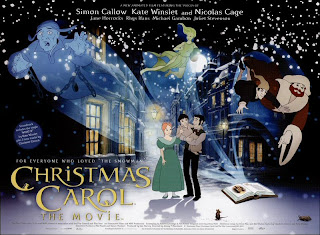 Director Murakami (The Snowman) says on the film’s website that it “preserves the original story ... while also developing the relationships between Dickens’ wonderful characters” (you can’t do both!), especially when you’re also “adding some new characters” (mmm, that’s preserving Dickens’ story...) and “expanding the drama and humour of the story” (you can’t do both!). The sheer hubris of buggering about with such a popular, long-lasting story is astounding. Do these people think that all the previous films, from the silent versions to Alastair Sim to Patrick Stewart, have somehow got it wrong and could have been improved with a romantic subplot and some mice? Nothing wrong with altering a classic if you admit that’s what you’re doing, but to present such as being faithful to the original author’s intentions (when in fact even loose adaptations like Scrooged had more Dickens in them!) is downright deceitful.

The whole film is a hopeless waste of time on everybody’s part, and it is utterly mystifying as to who this is aimed at. Adults will be bored to tears and irritated by the mice and songs, and even the animation, though reasonable, is nothing spectacular. Children will totally fail to be captivated by the characters, especially those bloody mice, and will probably be scared by the ghost sequences, which get quite psychedelic and weird. 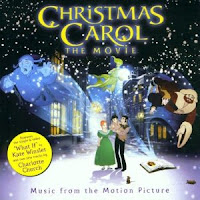 An all-star voice cast - Jane Horrocks, Rhys Ifans, Michael Gambon - doesn’t make the film watchable. Above all, the film is totally and utterly lacking in humour; there’s not a single gag anywhere in the bland script (co-written, bizarrely, by Red Dwarf star Llewellyn), which would only be excusable if the writers had gone back to the story’s roots as a scary ghost tale. But they haven’t.

A boring film which sadly can’t be recommended to anyone except Dickens completists.