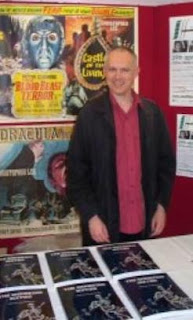 Where did the idea come from for The Shrieking Sixties?
“It's a complete and utter rip-off of the now much sought-after and very pricy FAB Press publication Ten Years of Terror! To his credit, TYoT co-editor David Flint has been very supportive of the project so I think we just about got away with blatantly nicking their idea. TYoT was a book I really wish I'd written/compiled myself, and ever since Andy Boot's Fragments of Fear came out in the mid-’90s I've wanted to join in and put something together on British horror, so the idea of doing a review-based study of one of the other important decades in the history of the genre gradually formulated.”

What criteria did you apply (and how rigidly) to determine if something was actually a ‘1960s’ ‘British’ ‘horror’ ‘film’?
“Well of course I'd already compiled a Brit horror filmography at my website Pass the Marmalade, so the criteria for inclusion were defined when the idea of a book was a mere twinkle in my eye. The film had to be 'British', which does however include several Harry Alan Towers-produced Euro-puddings and Jess Franco titles alongside the more familiar Hammer/Amicus/Tigon fare. With the '60s being our decade of choice, pre-video/dvd, I decided we'd look at movies that were given cinema release (one or two made-for-TV items snuck in as they did receive big-screen outings too). And, of course, they had to be 'horror films'. 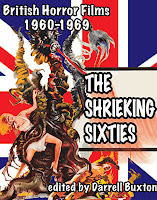 “Now I grew up on the Denis Gifford and Alan Frank film books of the 1970s, and genre critics at that time threw in giant monsters and deadly robots alongside the vampires and werewolves, so I've always looked at 'horror' in that light - so Gorgo, Konga, and the Daleks all take their rightful place among the pantheon of Sixties 'shockers'. This being an era kick-started by Peeping Tom and Psycho, we also elected to include many of the psychological thrillers/'mini-Hitchcocks' of the era, which allowed lots of Jimmy Sangster-scripted ‘they're trying to drive me insane’ stuff in, as well as obscure items like Night, After Night, After Night and The Very Edge. Of course we've added a 'problem/borderline' appendix (another rip-off, this time stolen from Donald C Willis' indispensable Horror and Science-Fiction Films Checklist volumes!) to cover the films that don't quite make the grade.”

How many of the films in the book have you actually seen (and which ones are top of your ‘wants list’)?
“It won't surprise you to learn that I've seen almost all of 'em. The exceptions are The Return of Dracula, an ultra-obscure vampire movie made for deaf audiences (of which I've seen a minute or two of footage), Andy Milligan's The Body Beneath and Jess Franco's Justine. There are several films I haven't encountered for years and would love to see again soon, in particular Curse of the Fly, Ten Little Indians, The Psychopath and The Oblong Box.” 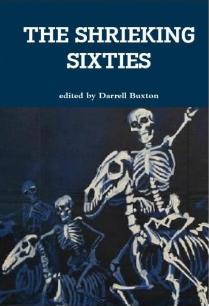 At the book launch in Derby you selected The Devil Rides Out as your favourite British film - why does it hold that position?
“David Pirie sums it up in his book A Heritage of Horror, where he correctly states that the film is so very melodramatic that it manages to transcend 'melodrama' and reveals itself as an ambitious allegorical work. Charles Gray's Mocata is cinema's ultimate villain, the set-pieces come thick and fast, and there are so many biffs to the jaw, vintage car chases, and doubting/disbelieving characters that it is one horror movie that ought to have immense appeal to non-fans as well as those of us who lap this stuff up.

Why do you think British horror has enjoyed such a boom in the 21st century and how long do you think the British Horror Revival can continue?
“Horror never goes away, despite the best efforts of the so-called establishment/authorities. As I hope we show in The Shrieking Sixties, there is a vital and vibrant tradition of British culture utilising dark and dangerous themes, and with new technology permitting new freedoms, it's been so exciting to witness a fresh generation of filmmakers tapping into such folklore. 28 Days Later..., Donkey Punch and Eden Lake have a modern sheen and allure but are really not so different from the tales of the undead, exotica, and psychological studies previously offered by UK cinema. The cycle will undoubtedly wane, but there will certainly be a new Clive Barker or Neil Marshall along soon after to kick-start the whole thing again. And I hope Chris Smith is around for a while, his movies are getting better and weirder as he progresses.” 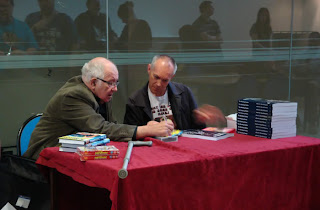 Of all the films in the book, which do you find most fascinating?
“Vernon Sewell's early '60s quota quickies. I invited potential contributors to select any films that they cared to review, but insisted on ring-fencing House of Mystery and The Man in the Back Seat for myself. Shot in stark black-and-white on low budgets, confined to less than an hour for a support slot on double bills, this brace of titles nevertheless manages to combine subtle supernatural terrors with very contemporary concerns, questions about morality, offbeat plot structures and a sense of a universe out of control. Sewell laces spectres into ‘you've never had it so good‘ Britain with a deft touch, and both of these movies continue to trouble one's mind and soul long after they have ended. What a shame he blew it with the absurd The Blood Beast Terror soon afterwards!”