Way back in 1997 I visited the set of Witchcraft X: Mistress of the Craft, the only film in that long-running series of stravisnuts to be shot in the UK. My mate Elisar Cabrera was the director and in among the cast, which was led by Stephanie Beaton and Eileen Daly, was a young lady named 'Emily Bouffante', making her second film.

Seven years on, Emily is better known as Emily Booth and has appeared in such notable films as Sacred Flesh, Cradle of Fear and Fallen Angels. She has a busy career presenting TV shows such as Bits and outThere, and most recently turned in a terrific performance in the lead role of Jake West's Evil Aliens. This transcript, which has lain unread in my files all this time, was (I believe) Emily's first ever interview. 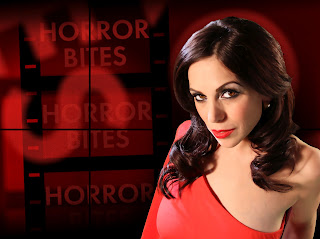 What's your role in this film?
"I'm the star. I am Linnaca. It sounds a bit like a washing powder, but there you go. And I haven't actually read the script because Elisar just phoned me up about three days ago and said, 'Do you want to be a vampire?' Because he saw Pervirella when it was at the Metro. I said, 'Yeah, sure. Sounds fun.' So he just got me in. It's just a day-by-day thing, what scenes I'm doing and all this kind of thing.

"What am I doing? Eileen is Raven - she was also in Pervirella with me - and she is my guru, head-vampire woman. I'm her worker, one of her girls - I'm her sidekick, and there's another girl as well. I think we just go around killing victims that we suckle on then let her get at the good bits. All I know is that I do that for a bit, then I have a brilliant, huge kung-fu/kick-boxing scene. And I can't do kung fu, but I'm learning kick-boxing at the moment. And then, there's a white witch, Celeste, involved and she gets the best of me. I'm saying to her, 'Oh I should have killed you years ago - show me what you've got!' and all this stuff. So I get a few kicks in and then she sends a fireball at me! And does away with me - bitch! So I have a huge death scene. but I'm afraid I don't know the story!"

It sounds like you're having fun.
"Oh yes. I'm having a great time doing this. I really enjoy it. I haven't worked with Elisar before, although as I say I've worked with Eileen before. No-one's getting much money or stuff. Everyone's just doing it for the love of it. At first I felt a bit inhibited because - again! - I'm a little bit… naked. You've seen Pervirella - that was very tongue in cheek. That's why I feel comfortable doing it. Because it's tongue-in-cheek. Okay, maybe it's a bit gratuitous, but it's fun. I enjoy it and after a while you relax because all the crew are really cool, you know. Other girls get their kit off and that way it makes me feel a little bit better." 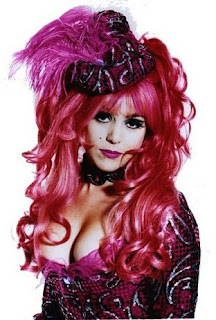 Was Pervirella the first thing you did?
"Yes, I'm not an actress! No, I don't want anyone to think that. But Pervirella: my brother worked with Josh Collins, and Josh said, 'Ooh, we're doing a film called Pervirella. We actually need a very young, uninhibited girl.' And my brother said, 'Oh, my sister's got no inhibitions whatsoever!' I was like, 'Oh thanks, Simon.' So they got me in for a screen test. Two-hour long screen test: I had to wrestle with a python, I had to shag a pillow to death. Then afterwards, after I'd sorted myself out on Josh's bed - not in that way! - I got the part.

"And that was a really fun shoot. Five weeks non-stop - wicked fun. We were having a different adventure every day. I really enjoyed it. I was very lucky to do that as a feature. I don't even know if I'm an actress. I'd not done it before. But certain projects, like this, I love doing. Anything that's a bit offbeat, a bit kitsch, a bit interesting, a bit bizarre."

Have you done anything else since Pervirella?
"I'm actually a student, still studying. Studying film. So I'm happy on either side of the camera, I'm not sure which one I want to pursue. I did a little role in Event Horizon. It was a very small role. I was sort of a featured extra and got bloody well paid! Met Sam Neill - he was lovely."

How did you get that?
"That was through Alex Chandon, who directed Pervirella. He knew someone who worked on Event Horizon who said they needed some extras to be really outrageous. That was a brilliant shoot but it was only extras work. I've done the odd photo shoot but no more acting really, apart from this."

So would you like to direct?
"I have done directing before. I directed a little 16mm film. I'd like to do presenting, TV presenting or something like that. I've done radio work before. I'll just bum around doing anything!" 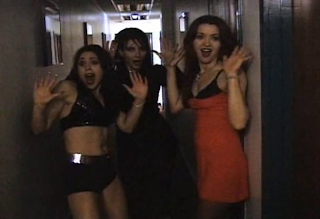 I can just see the expose: 'dodgy film history of Blue Peter presenter.'
"I'll have to rule out children's TV now because I have a sordid past that they can just dig right up! It would just be awful! My dad still thinks I'm just working on some student production as a runner! I am just doing everything at the moment."

Where are you studying?
"At a university in South London. I'm not a page three girl, I'm not a stripper, I'm none of this. It's quite weird how someone gets from one place to another, just through knowing someone who knew someone. But everyone who works on these film does have a similar vibe, a similar take. They like horror and fantasy. It's just pure fantasy."

Playing a vampire must be pretty cool.
"It's great fun. I had my teeth in earlier when someone was taking photos, and you just get so into it! And they're dribbling blood into your mouth and you're looking in the mirror, practising your moves. It's just the best feeling. You really do get into the part immediately. I know it sounds a bit stupid, like: 'How can you say it's real acting? It's not.' But you still have to develop some kind of animal nature, and when you've got these teeth inside you… Me and this girl were just letting rip - it was brilliant!"

Other actors I've met playing vampires have loved it.
"It's the one chance we have to go mad and not act subtle. Subtle is not the name of the game here. It's like: go mad, be as sly as you like, be as sexy as you like and don't feel ashamed. It's just brilliant. You can totally delve into the deepest parts of you and let them out. So it's great fun!"

And what fingernails!
"They keep coming off in the middle of a ravenous feed. I'm ripping someone's clothes off and - 'Oop! Hang on, hold it. My nails are off.' Spend the next half an hour searching for nails."

Have you got anything else lined up?
"Well, am I allowed to say? I don't have an agent. I'm free, a free agent. I've got a couple of things in the pipeline that I'm just planning with my friends. A bit of music actually, a bit of singing. But again it's in keeping with the whole vampy theme. I can't give away too much, but let's say that we're very serious about it, we've got people interested and it's going to be very vampy. Because, I don't know, but I do think that there might be a renaissance of that whole gothic thing, especially with the new romantics. The music that's been coming back - Spandau Ballet, Duran Duran - it's brilliant. Music is going in all directions now and I really think that the more gothic, vampy stuff is coming back. Not in an '80s way - it'll still be very now - but hopefully we'll be up there when it happens."