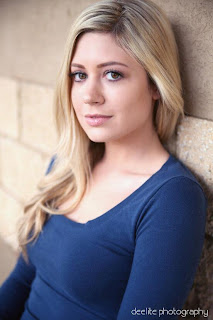 This e-mail mini-interview with actress/producer Jackey Hall about Chainsaw Cheerleaders was conducted in August 2010 but somehow slipped between the cracks and only resurfaced when I was transferring my website content three years later.

How and why did you get into acting?
"Acting has always been an interest of mine! When I graduated high school I found out about an independent horror film that was going to be made about an hour from my house! So I quickly got in touch with the people and got involved with the film! That's where my love of film making began!"

You also have credits as a producer or co-producer on some pictures: what has that involved?
"It has involved finding budgets for films, finding and hiring cast and crew, keeping things on set organised. I have even recently started co-writing scripts!"

On Chainsaw Cheerleaders you were working with very experienced B-movie names like Don Farmer and Tiffany Shepis: what were you able to learn from them?
"Well, I think on every film set you can learn a lot. Everybody does things differently and has their own style to it! To me it's just really cool to see the different work that everyone does acting or directing!" 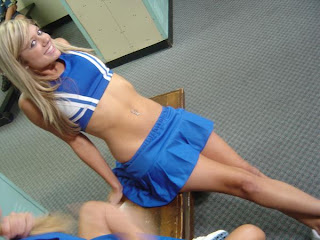 What advice would you offer a young actress just starting out in B-movies?
"Research and look up any film director's previous work to make sure it's something you want to be a part of! Get all the experience you can get including extra work! Never stop networking and keep updated headshots!"

What projects do you have lined up and what sort of movies are you looking to make in the future?
"Right now I am filming Trick or Eat which is a web/anthology series much in the vein of Are You Afraid of the Dark and Tales from the Crypt! Also I'm about to start filming on a web comedy series called Dumb Girls which I have co-written and am also producing!"
Posted by MJ Simpson at 17:35