Two years ago I first contacted top comic book artist Tim Bradstreet via his website. At that time, Tim had just landed a gig as conceptual artist on Blade 2. The film was released in the UK last weekend (29th March 2002) and Tim has kindly agreed to this follow-up interview: 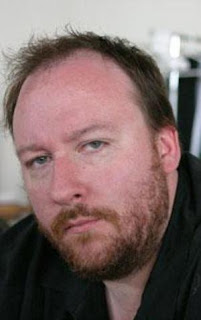 What has been the biggest thrill in working on Blade 2, and what was the biggest frustration?
“Definitely working with Guillermo Del Toro would be the biggest thrill. He's like a big kid, but focused and fun to work for. He has a vision and part of that vision incorporated my vision, which is a tremendous validation for me. I've always wanted to make a film or be a part of a film and he gave me the opportunity. It was a major thrill. Meeting Tim Curry while working on Blade 2 was also freakin' great.

“The biggest frustration is easy to answer. Never having worked on a film before I came to it somewhat unprepared. I wasn't sure if I'd be meeting in LA and then working at home or working in LA the whole time and no one could tell me for sure. When I got there the artists (TyRubin Ellingson, Wayne Barlow, Mike Mignola, and me) spent two days doing a read through of the script with Guillermo, David Goyer and the make-up effects supervisor, Steve Johnson. After that we all worked on the Reaper's mouth problem for two days and then we were cut loose to work on our individual specialties.

"At this point I knew that I'd be staying in LA but now I didn't have my computer or scanner and printer which are essential tools for me in my work. It took like a week to get all the stuff I needed. So I spent a lot of that time researching, reference hunting and doing photo-shoots but turned out no actual work. I felt like I had done nothing while everyone else was producing. That's a shitty feeling and very frustrating. It turned out well though 'cause after I got set up I worked my tail off and did a ton of work.” 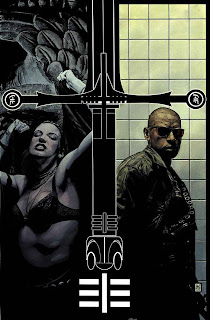 To what extent did you work with, or at least coordinate with, the other conceptual artists on the film?
“Well, we all worked in the same room. Some of the artists had offices. Mike and Ty worked in an office connected to our room but the door was always open. Wayne and I worked in the main room. Basically we hung everything we did on the walls so we could all see what the other person was producing. Producers and other folks could come in and see all the work in progress by looking at the walls. Guillermo would come in and comment on the work and offer suggestions or new directions and then we'd go from there. It was a great group of guys, we gelled. Everyone had his own niche to concentrate on. I designed the Bloodpack and many other of the supporting Vampire characters. Mike designed a lot of sets, some uniforms and almost everything to do with Damaskinos. Ty designed all the gadgets and guns and Wayne worked specifically on the Reapers.”

What differences are there between designing for a comic book character and designing for an actor who will have to actually wear/carry this stuff?
“None at all as far as I'm concerned. I'm shooting models with versions of the costumes I've patched together so I feel that anything I can bring to it should be do-able. Most of the armour I designed was form-fitting and non-bulky. I always think in terms of ‘someone has to wear this.’ In comics it's the same thing. That's why I don't draw Cable.”

How is your work on the film influencing your work on the Blade comic?
“Hmm, it's mostly a vibe. I want to get the feel of the movies on that cover every month. Most people don't remember the original comic book Blade. Predominantly, people identify the character with Snipes. We can't use Snipes for the comic book so I find a guy who fits the physical description, load him up and dress him like a Vampire hunter with the technology at Blade's disposal, add the tattoos and Wahlah! - Blade. I take a realistic approach to it that is inspired by the films. That goes for the supporting characters as well. Often times I'm doing covers four to five months prior to the interior art being executed so I have to conceptualise what the other characters look like as well. It doesn't always match the interior artist's concepts but that is sometimes unavoidable. Chris Hinz, the writer, said it best: ‘The covers are Tim's world and the interiors are another reality, but both are equally representative of the book as a whole.’” 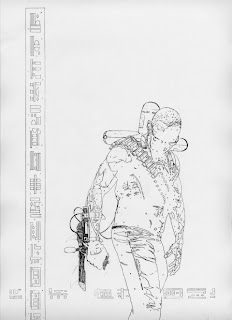 From a designer's point of view, what is Guillermo Del Toro like to work with?
“He's a dream. He's an artist too so he is able to draw his ideas out in this cool little journal he keeps. It's filled with tons of little sketches, many of them fully coloured. He starts out with specific ideas of what he wants (some based on ideas in his journal), but he is open to any and all suggestions. With a little bit of direction he let me loose on designing the Bloodpack and gave me a lot of freedom which is wonderful. The guy knows what he's doing and he hires people because he knows what they can bring to the party. That's really all a designer can ask for. Simple direction, and a boss that has enough confidence in your abilities to let you run. If you get off course he steers you back on target. If only every working relationship could be like that.”

What prospects/plans exist for Blade 3 and do you expect to be involved?
“I have no idea. Judging from the amount of cash Blade 2 is bringing in I'd say it's a safe bet that there will be a third film. Wesley loves the character so he should be a lock. I look at the opportunity to work on it like this. Unless Guillermo is directing it (which is most likely doubtful) I will probably not be asked to work on it. None of the design team from the first film worked on the second. It's usually a director’s choice. Who does he want to work with? Most directors have that handful of guys they bring with them from picture to picture. In all likelihood, I'll be out. But, I'm totally open to the idea if someone wants me to come in and be a part of it. I can bring that veteran confidence with me...”