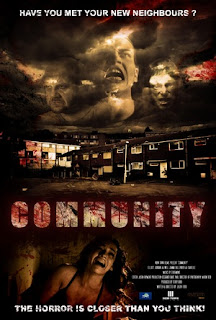 When I started watching Community, my initial thoughts were that this was a sort of serious, urban take on the same themes as Inbred, with its tale of an isolated community slaughtering interlopers. But gradually I realised that what we have here is more like an expansion of Steven Sheil’s brilliant Mum and Dad, with its warped values of family, loyalty and love. There are also elements of Eden Lake, in the use of very young antagonists, and even Johannes Roberts’ F in the way that the ‘hoodie horror’ has a non-realist aspect; not really fantasy, but not the brutal reality usually associated with that subgenre.

All of which comparisons are not intended to show that Jason Ford’s terrific second feature is at all derivative, but instead to emphasise how ideas and tropes recur across the British Horror Revival as different directors find different ways of approaching the same interesting, important themes.

Jemma Dallender stars as film student Isabelle, determined to make a documentary about the notorious Drayman Estate, a no-go zone of once-respectable, now dilapidated 1970s housing. Elliott Jordan is Will, who has agreed to accompany her and act as camera-man. A local bus, which doesn’t run after dark, drops them off on the outskirts of the estate which, in a set-up that doesn’t quite ring true, seems to be an isolated rural community, unconnected to any actual urban conurbation. 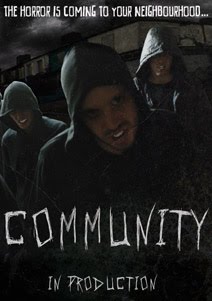 Isabelle and Will encounter a group of primary-age kids who proudly show some of the animals they have killed (in an earlier version of the script, one of these kids was going to be a pregnant 12-year-old but Ford has wisely opted to keep the disturbing images limited at this stage). Mysteriously, the two students are being watched from a parked car by a pair of dodgy geezers whose relevance will become apparent later, simultaneously justifying Isabelle’s determination to not leave when the opportunity presents itself.

She wants to get a ‘money shot’ of the special, home-grown weed which bedevils the estate, and finds it in the run-down community centre. She also finds trouble when a mobile phone (not hers or Will’s) betrays them in one of the cleverest - and tensest - bits of plotting I have seen for quite some time.

The Drayman Estate turns out to be a truly awful place, where adults and children live empty lives broken only by drugs and violence. Three age-groups are neatly presented: the little kids, who seem almost normal apart from a tendency to hyperactivity and casual sadism; the adults, who spend their days stoned on their stained, torn sofas; and the teenagers, a purely animalistic generation who communicate in grunts and screams.

Binding all this together is the special weed and the estate’s de facto leader Auntie, a wonderfully observed study in creepy ambiguity by Paul McNeilly. In fact the cast as a whole - adults and children alike - are excellent, with none of the Drayman inhabitants ever tripping over into caricature, and two mesmerising central performances from Dallender and Jordan. 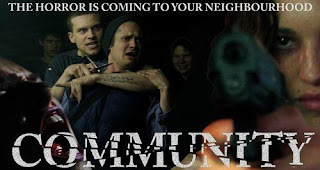 One reason why this all works so well is that there are places almost like the Drayman Estate and there are certainly people like its inhabitants. People with nothing to do all day except spend their state benefits on drugs and drink, raising a generation of kids with little chance of ever escaping the social dependency hell that the New Labour government created in the noughties: a working class distracted from having to think so that the privileged ruling elite could concentrate on making themselves and their friends even richer.

Like so many of the best BHR films, Community has something to say about 21st century Britain and modern British society - ‘Broken Britain’ - but also works as a terrific horror film in its own right.

Jason Ford writes and directs with confidence, creating characters we care about, characters we’re frightened of and characters who intrigue us. At its most basic level, yes this is the nth entry in the post-Texas Chainsaw Massacre stakes of young folks encountering inbred sickos and having to escape, but Ford works to create new twists and new ideas instead of relying on lazy clichés.

Producer Terry Bird (who also produced Ford’s debut, New Town Original) is an actor who has appeared in everything from The Bill to Chucklevision and here plays one of the Estate’s alpha males, a violent brute named Dumpy. The solid supporting cast also includes Jo Dyson who, bizarrely, was in another recent British movie about film students venturing onto a dangerously violent estate, Ash and Naeem Mahmood’s ‘apocalyptic thriller’ The Affected. 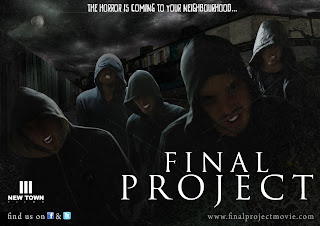 Editor Jason Rayment produced and DP-ed Where Seagulls Cry a Song, an intriguing-sounding 2010 psychological thriller set across three time periods (which is available to view on YouTube). Brad Watson (director of Asylum Night and The 7th Dimension) supervised visual effects while special effects were overseen by John Schoonraad (Little Deaths, 13hrs). The DP was Aaron Reid who has photographed videos for the likes of Professor Green, Alexandra Burke and, um, Jedward.

Shot around Basildon over three weeks on a tiny budget, Community premiered at the 2012 Frightfest with a local screening a few days later, appearing on UK DVD in March 2013. The end credits play under a song called ‘Final Project’ which was the film’s original title.