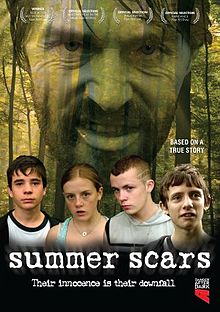 Summer Scars is Julian Richards’ fourth feature and his most personal. It is based on an incident that happened to him when he was a teenager - but exaggerated slightly. It’s also defiantly non-commercial and thereby frustratingly difficult to pigeonhole. If I had to describe it as one thing I would say that it is a dark coming-of-age drama that stands comparison with, say, Stand By Me. I heard one person say it was like a more serious Goonies which is probably taking it a bit too far.

In a nutshell, six kids bunk off school to hang out in the woods, equipped with a couple of cans of beer, a few cigarettes and a stolen moped. They’re all meant to be fourteen - according to the publicity - but Bingo (Ciaran Joyce, who was in an episode of Torchwood and played Lol in Tracey Beaker) and Paul (Jonathan Jones) come across as slightly older, both with some stirrings of feelings for Leanne (Amy Harvey), the only girl in the gang. Jonesy (Darren Evans) and Mugsy (Ryan Conway, also in Torchwood) seem slightly younger - or at least, less physically mature. Ben (Christopher Conway) is Paul’s disabled younger brother, who has to leave his wheelchair and reach the woodland hide-out by piggyback. Both Conway brothers were also in a Dutch-Belgian time travel feature called Crusade in Jeans, starring Emily Watson and Udo Kier.

In the woods the kids meet Peter, a bedraggled chap with a North Country accent (apparently a Welsh accent and a West Country accent were both considered before settling on a touch of Lancashire). We know nothing about Peter and we never find out anything about him - except that he is not as stable as one might hope. He is played by Kevin Howarth, who was so terrific in Julian’s The Last Horror Movie, in another unnervingly bravura performance. 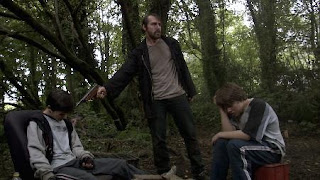 Over the course of this relatively short film - which started life as a half-hour script and now clocks in at 75 minutes - Peter helps the kids to grow up, partly through teaching and showing them stuff, partly through conflict with them. He’s an intriguing and deliberately vague character whose creepiness gradually comes to the fore but not in a steady, constant way. Sometimes he seems like a good guy, sometimes he seems like a psycho, and bit by bit the latter view starts to become prevalent. But even when he is effectively holding the kids hostage, he shows an avuncular side.

When a film leaves this many questions unanswered, it is easy to read things into it and I was surprised at the religious subtext (something Julian says was added - if it’s there at all - by screenwriter Al Wilson). Peter initially claims to be looking for a lost dog named Jesus (pronounced like the Messiah, not the Spanish way) and later leads the frightened kids in the Lord’s Prayer. With his close-trimmed but straggly beard and his mysterious (but clearly disreputable) background, there’s a definite hint of Whistle Down the Wind in Summer Scars.

This is not a horror film, not by any definition, although horror festivals with liberal remits may want to programme it because it does explore the darker side of human nature and its director and star have a reputation in that genre. Nor, it goes without saying, is it a kids’ film. 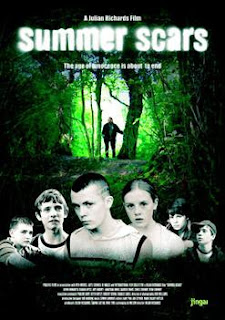 What is impressive is that the six youngsters - quite apart from all displaying good, natural acting talent - are portrayed as modern, working class kids without limiting their vocabulary to grunts and F-words, yet nor do they come across as atypically refined or loquacious. The dialogue sounds right, even though we know in our heart of hearts that six teenagers bunking off school in 21st century Britain are unlikely to do more than swear and mumble.

If the film has a weakness it’s that, although it tells a story, there’s not much of a resolution. The kids at the end of the film don’t seem significantly different to how they were when we met them and there’s no real sense that this unusual and disturbing experience has changed them in any way. Have they learned anything about themselves or about the world from their encounter with Peter? There’s no evidence of this in the epilogue. Summer Scars is a rite-of-passage film which, to be honest, is all rite and no passage.

But treat it as a character piece, rather than a story, and the film works well. Kevin Howarth’s portrayal of Peter is key to this: at some points he’s a man-child, at others he’s an older brother, sometimes he’s a teacher and sometimes he’s a bully. It’s a rich, complex performance, as was Max Parry (in direct comparison, I would say Max was richer and Peter is more complex).

Devoid of easily-dated youth culture references and with an anonymous background that could put these kids anywhere in Europe if the film is dubbed, Summer Scars has good potential for overseas sales. And if it’s not as obviously commercial as The Last Horror Movie, nevertheless it reaffirms Julian Richards as a talented director with things to say and the skills required to say them. 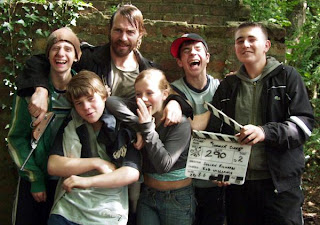