I interviewed Brian Lloyd, one of the stars of Doll Graveyard, by phone in February 2006.

How did you get involved with Doll Graveyard?
"It’s the first project I’ve done since I came out to start acting. That was about two years ago, so about a year after I came out here. I’d been working at stuff, just dropping off head-shots and looking for things online, seeing what the listings and the castings were for each day, studying three times a week and just busting my butt. I ended up with an audition and I read well for it, then they brought me back in. After the reading they said, ‘That’s the guy we want,’ so it was a pretty neat opportunity."

Were you familiar with Charlie Band’s work beforehand?
"I wasn’t before, in terms of connecting Charlie to the films. I knew Troll and Ghoulies and Puppet Master but I wasn’t familiar with that being Charlie. So needless to say, I didn’t know what to expect. It was a real small budget, a non-union film, but the first day of shooting I saw that things were going to be fun and it was a real professional setting. Considering how small it was, they were really efficient and Charlie knew exactly what he wanted. It ended up just being a fantastic first experience. I enjoyed working with Charlie more than I ever knew I would."

A lot of the cast were fairly inexperienced: were you all learning together?
"Yes, I definitely think so. The five of us who played the high school kids, we had good chemistry together, we all got along, which was a lot of fun. That obviously helps when you’re shooting. Charlie was patient and the crew was fantastic. They made it real easy to say, ‘Here’s what I’m looking for.’ They gave you the flexibility to say, ‘Okay, I’ll make some choices here and do this and see how it happens.’ I think people had fun with it; there weren’t big egos involved or anything like that. You’re sitting there going: ‘I can’t believe it: I’m making a movie. It’s actually a legitimate deal.’ It was fun that way."

It must also have been very hard work, especially with such a tight schedule.
"Yes, especially as we knew that Charlie wasn’t making this movie for a whole lot. If I remember correctly it was 35mm which is fairly expensive. You’ve got to be efficient, you’ve got to be professional about things. So it was a good first experience to learn those things for the future. I learned a ton, just being on set. That small environment where the camera is, how wide the frame is, working within that distinction of what we’re supposed to do. It taught me a lot for things I worked on in the future, it made me more comfortable and better."

How did you find working with the special effects and the puppets?
"I got asked that yesterday. I thought it was fun. Those things were about a foot and a half tall. It’s a little different because you’re obviously not getting a whole lot back like you would do from an actor where you can really focus and listen and give natural reactions. But at the same time, a character like mine who’s an over-the-top jerk, a meat-head jock that was fun to play; the specific interaction that I had with that little Ooga-Booga doll was a ton of fun to deal with. It was just different but we had fun with it."

What did you think when you saw the finished film?
"I didn’t know what to expect about that. It just happened that I have a younger brother who goes to school out here. He was playing soccer and my folks happened to fly in that day that they did a screening for the cast and crew and gave a party. When I saw it I was really, really pleasantly, not surprised but ecstatic about it, going, ‘This isn’t too damn bad at all!’ I didn’t know what to expect from my performance or the other performances. It was neat having my parents there, I think they were kind of tickled about it. They’re proud. And I just thought: gee, the producers are really happy about it before we had a seen a thing. It’s come together really well, Charlie’s happy with it. For a B horror movie, what you’re getting, what you’re going in for, this is not too darn bad at all!"

I understand that you studied accountancy and business administration, so what are you doing acting?
"That’s a great question. I think my dad’s still wondering the same thing! We’re really good friends with the Dean from the business school at North Dakota. My dad and he were from the same small town in North Dakota and were fraternity brothers together in college. Over Christmas I went back, got a tour of all the wonderful things that the business school has got. My dad looked at his buddy, the Dean, and said, ‘I want my money back.’ But they’re very supportive. When I saw The Sting when I was eight years old, with my Dad, for the first time, I just fell in love with Robert Redford. I just thought what an awesome, amazing, cool guy. I loved that movie. Acting was always something that I admired greatly and sort of had a calm desire for underneath but I always thought: ‘No, it’s not my gig, not what I do. I’m a sports guy. These other kids, they’re the good actors.’ As much fun as it was to go see a movie or a show, there was always a little desire underneath, saying, ‘I think I could do that. What an amazing neat thing, if a guy could do that.’ Part of that challenge was just wanting to get a taste for it.

"So then I’m though college and I did the fraternity and I did school and I had a great time. I started working outside of school, selling pharmaceuticals. I had an opportunity to go to New York City to go audition for All My Children. I had been working with a girl that was getting me some little print opportunities. So I went out there and visited a good friend of mine but I told no-one else about the fact that I was going to do this. I went out and read for this woman who was the casting director for All My Children; didn’t do well, I’m sure I was pretty green, But I met some agencies out there and cold read for them. They said, ‘You know what? We think you’ve got good instincts and if you come out to LA, we’ll rep you.’ I thought about it for about five minutes and said, ‘I’m going to go. It’s what I’ve got to do.’ It’s crazy, it really is. You sort of have to be half-cocked and crazy to do something like that. When I came out, I really didn’t know what I was doing but I tried to have as much of a plan as I could. I’m going out, I’m going to work at it and see what happens."

You’ve got that grounding in another profession if you need to fall back on it.
"I always say that I’m not worried about following a different path in life. I truly believe that if you do what you love, money and stability will follow. If you do the right thing for the right reasons, opportunities will present themselves. I think God’s there to provide for a person. If you have faith in that and you do the right things for the right reasons, with a little bit of stability and some hard work - you’ll get there." 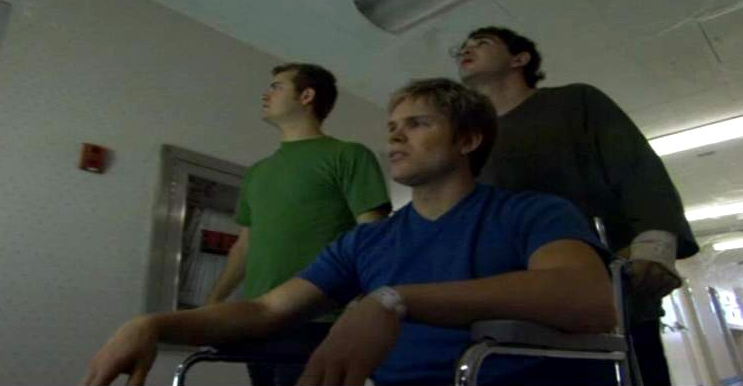 Where has your career taken you since Doll Graveyard?
"Subsequently I have shot two other, small independent films. One was a horror/sci-fi film and the other was a sort of Van Wilder-meets-American Pie college-type movie. They were fun to do and had a little bit bigger budgets. We’ll see if they come out or not. I know they were shopping around and they’re in post-production, The second one, the college-type movie is called Bald and the other one is called Candy Stripers. In Bald I had a supporting role; I played Joey Powers, the jock who was kicked off the wrestling team for rubbing his manhood up against the other wrestlers. I end up being the boyfriend of the real flamboyant gay guy in the movie. So that was fun, it’s a really different thing to try out. In Candy Stripers I play a jolly, all-American lead in it. We’re in this basketball team, there’s a fight on the court, we end up at the hospital, get attacked by aliens - and mayhem ensues. It was good to do because I got a lot of good reel from it. It was a good experience. But I’ve got to say that playing the character Rich in Doll Graveyard was the most fun I’ve had because he was just such a rocking character to play."

What’s your ultimate ambition?
"After getting a taste for television - I got a chance to get a couple of small roles on CSI: New York and a show called Huff - honestly my number one big goal is to support myself as a full-time, working actor, living comfortably. My second big goal is to have the opportunity to have enough success where I can move back to North Dakota. That would be the ultimate: if I was able to move back there and live there and still be able to say, 'Okay, here’s a project to work on.' Actors do that once they have reached a certain level and have representation that can set up opportunities for them. So that’s my biggest goal.”