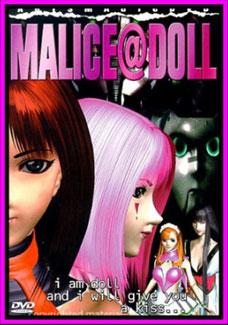 In the future, in a long-abandoned entertainment complex, the robotic prostitutes (or ‘Dolls’) and various functional/administrative robots continue their now meaningless existence. Then one day, one of the Dolls - Malice - becomes human.

That’s the premise of this extraordinary and beautifully realised fable. In essence it’s a unique twist on the Pinocchio story, with robots becoming human against their wishes (initially). Malice Doll is sent by the head robot, Joe Admin, to be repaired when fluid starts leaking from her eye. But something bizarre happens and when Malice regains consciousness she is, well, conscious. She looks different (though still beautiful), her body is soft and pliant, she can feel pain - both physical and emotional. She has become human.

The other Dolls initially distrust her, but one by one succumb to the desire to change, as do the non-humanoid robots which attend them. The humanity is spread, virus-like, by kissing (“It is all I can do,” says Malice numerous times) but the other dolls and robots become deformed and monstrous. An additional, constant threat is a destroyer robot, Devo Leukocyte, which prowls the corridors - and once the Dolls are human they can feel pain and even die. Eventually Malice progresses beyond humanity and becomes a spirit, soaring away up through the complex.

I’m not 100 per cent certain what it all means, but Malice@Doll is a magical piece of computer animation with a mystical, PK Dick-ian theme, exploring the difference between ‘robot’ and ‘human’ in the way that Hollywood tosh like A.I. conspicuously failed to do. The emptiness of the entertainment complex and of the Dolls’ lives is wonderfully presented. There is no clue as to when or why the complex was abandoned or whether humanity still exists at all. The Dolls and robots have no real idea why they’re there - as they apparently never did - and with the patience of machines they are simply waiting for something or someone to arrive.

Why/how does Malice transform from Doll to human? I don’t know and I’m not sure it matters. It relates in some way to a ghost(?) of a little girl which she sees, but more than that I cannot say. There may be a (M)Alice in Wonderland connection here as screenwriter Chiaki J Konaka also worked on the TV series Alice 6 and the Playstation game and anime series Alice in Cyberland (as well as writing some Ultraman episodes and Evil Dead Trap 2). But other than the image of a rabbit at one point, it’s not immediately evident. 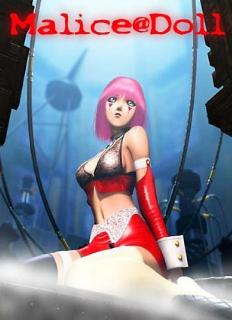 Rendered in 3D CGI, the animation is perfectly suited to the stilted body-movements and mask-like visages of the Dolls and the robots. Interestingly, the ‘camera’ is locked off on every shot, making the film more theatrical and staged. The final sequence, when Malice becomes a spirit, mixes computer animation with traditional cel animation to interesting effect. The character design is credited to Shinobu Nishioka while Yasu Moriki was responsible for ‘creature and conceptual design.’

I speak as someone with a pathological dislike of anime (don’t ask me to explain it: I love Japanese movies, I love cartoons, but Japanese cartoons leave me cold). But Malice@Doll doesn’t seem like anime to me, more like a puppet movie (Konaka has expressed a fondness for Czech animation - Jiri Trnka and the like). Perhaps the new wave of CGI animation emerging from Japan will find a whole new audience in the west, previously put off by western marketing of anime.

Malice@Doll is something new and different and should be watched, and enjoyed, with an open mind.