Dave Jay is the principal author of Empire of the ‘B’s: The Mad Movie World of Charles Band, a magnificent tome on the first stage of the epic career of C Band Esq. The book was published in February 2014 which is when Dave answered a few questions by email. 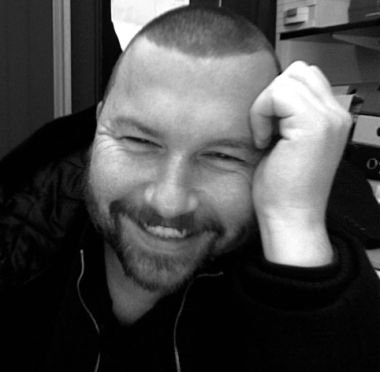 What was the first Band film you watched and when did you become aware of Charlie Band as a film-maker with an identifiable body of work?
“I guess I first became aware of Charles Band after a random viewing of The Dungeonmaster, which was released in the UK back in 1984 (prior to its US theatrical debut) under the rather clunky title of Ragewar: The Challenges of Excalibrate. Unlike some other Empire pictures, it’s not a film that’s aged particularly well, but it being an anthology of sorts that changed scenarios every ten minutes and mixed together horror, sci-fi, fantasy and even a post-nuke Road Warrior rip-off, it kinda blew my little 12 year-old mind! The fact that all this was topped off with cool David Allen stop-motion and (most surprisingly) a brief, Disney animated dragon battle, immediately made me want to track down other films by this obviously ambitious Charlie Band guy. Luckily, many of his films were released by two prominent UK video labels of the time: Entertainment in Video and Intervision. So I gorged on his back catalogue in the ensuing months and soon became a lifelong fan.”

I first heard of this book about three years ago. How long have you been working on the project and how confident were you at the start that you would find a publisher?
“Co-writer Torsten Dewi and I first entered into discussions about the book in 2003 and, after a few tentative steps towards writing it, went full-tilt into the project around 2005. At the time, the plan was to release a tome covering Band’s entire career, but both of us have a real soft spot for the Empire years so a lot of the early work was centred on this era. Torsten was equally busy knocking out screenplays for producer Harry Alan Towers (including a remake of Jess Franco’s 99 Women, which was close to going into production but stalled just before shooting commenced), so I took on the bulk of the writing in the meantime, interviewing key Band personnel and getting John Klyza on board to author a chapter on Wizard Video.

"Nathan Shumate also joined the team around this time, but he largely concentrated on Charlie’s later movies (such as the Moonbeam sub-label and the ultimately doomed Full Moon/Tempe Entertainment collaboration). The original plan was to self-publish, but the funds simply weren’t there to do it, so I suggested that we instead shop the book around a few British genre publishers. I sent a short sample to the three publishers that I had most respect for and Hemlock Books thankfully bit. However, due to the fact that Charlie Band has produced and/or distributed well over 250 films since the mid-1970s, the project had spiralled way out of control. Denis Meikle at Hemlock sensibly suggested that the work be cut in half and the first volume (covering 1973-1989) then be knocked into shape as a stand-alone title. And so, in 2011, we finally arrived at what is now known as Empire of the ‘B’s.” 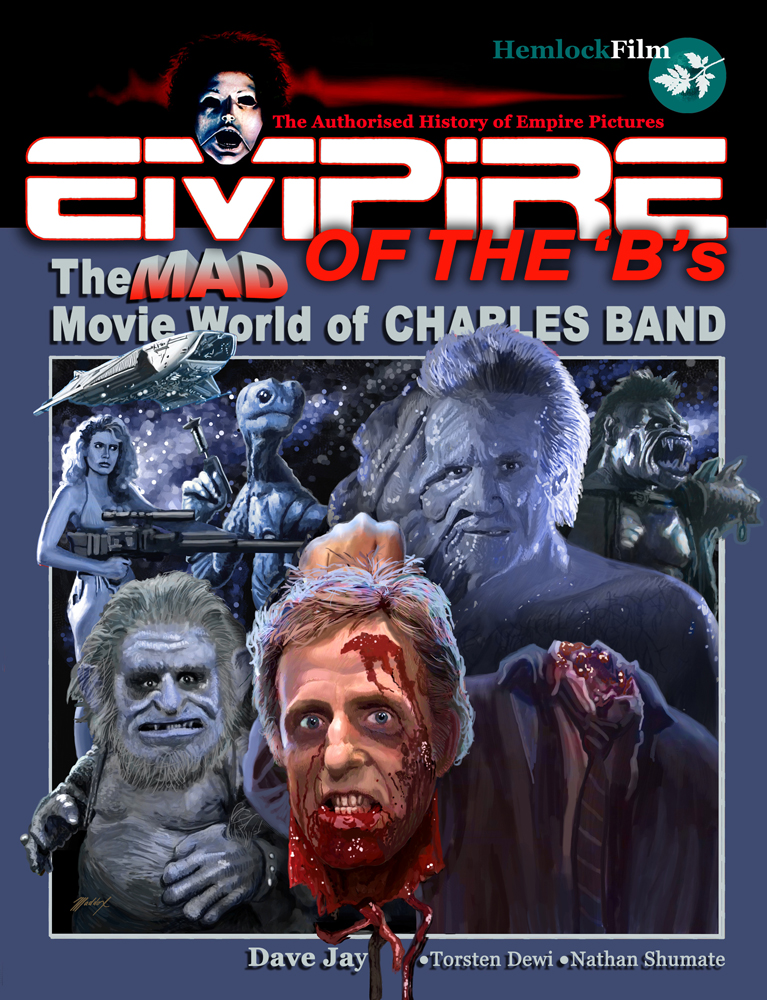 It's not clear from the book which parts have been written by your credited co-authors, Torsten Dewi and my old pal Nathan Shumate. How did the three of you get together and how was the work divvied up?
“Well, if you check the contents pages of the book, it clearly marks Torsten’s and Nathan’s contributions. [Teeny, tiny little asterisks which I totally failed to spot - MJS] I did write the bulk of the reviews, conducted all of the interviews (bar Dave DeCoteau’s and Michael Cassutt’s) and also provided the introduction and afterword. Empire Pictures was my first cinematic crush, so I wanted to be as involved in the writing of this era as possible. But the second volume, covering the entire Full Moon saga, should prove far more democratic - if anything, we’ll be taking on at least one more writer so that we can actually get the book finished and out in our lifetime!

"To answer the first half of your question, Empire of the ‘B’s is quite simply a bastard love-child of the internet: I’m based in the UK, Torsten in Germany, Nathan in the US and John Klyza in Australia. Additionally, our guest contributor Cyrille Bossy lives in France and Harald Dolezal, who provided many of the book’s images, resides in Austria. I wouldn’t have even known that these people existed, let alone written a book with them, were it not for the many dedicated genre movie websites and forums scattered around the net. It’s kind of amazing when one considers that this project wouldn’t have been in any way feasible only two decades ago.”

Apart from those no longer with us, was there anyone you wanted to interview who either couldn't be tracked down or declined to comment?
“Out of those still with us, John Buechler is the most prominent Band cohort who remains missing-in-action. I approached him about being interviewed for the book and had a set of questions ready to go, but he didn’t seem too interested. That was a real shame. I almost landed screenwriter Frank Ray Perilli and talked with his agent (or maybe manager, I can’t remember), Blossom. But she insisted that it be a face-to-face interview and, factoring in an air ticket to LA, that would have been one expensive lunch date! Outside of that, it’s sobering to think of the many Band regulars that have since passed on: Albert Band, Mac Ahlberg, Cheryl Smith, Dave Allen, Michael Pataki, David Gale, Stan Winston… unfortunately, the list goes on.”

Sod's Law says that something worth including will always turn up just after a book goes to press (e.g. I now know of several additional films which could have been included in Urban Gothic). What was it in your case?
“The biggest Empire discovery of the past few years proved to be both a blessing and a curse: Pulse Pounders, the unfinished and long-lost ‘multi-sequel’ anthology directed by Charlie Band back in 1987-88, was uncovered by Band himself as a rough VHS work-print, and two of the three filmed episodes (The Evil Clergyman and Trancers: City of Lost Angels) have since been screened at festivals and released to DVD. Fantastic news though this was, I had already written extensively about Pulse Pounders as a movie likely to remain in the vaults, never to be seen. By this time, Empire of the ‘B’s was too far into the design process for what would have been an extensive re-write, so I instead added a brief note towards the end of the book explaining that the film had since been found and released. A little embarrassing for me but nobody’s complained about it so far, so hopefully I got away with it!” 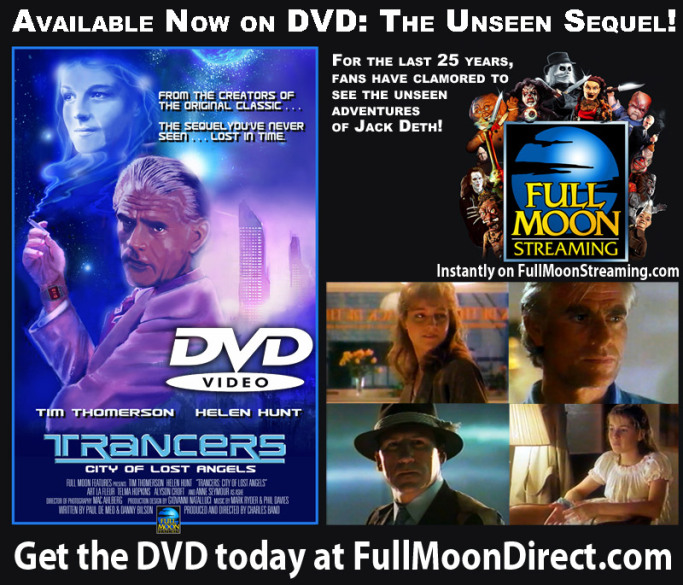 Are you planning to document the rest of Band's career and, if so, how many volumes/years do you think this will take?
“As tempting as it would be to write a second book covering the Full Moon-Paramount years of 1989-1994 (believe me, there’s more than enough material there for another stand-alone title), Torsten and I are due to discuss whether we can encapsulate the full 25 years of Full Moon in the next volume without short-changing the subject. It’ll be a challenge, so I guess you’ll have to watch this space!

Finally, out of all of Charlie Band's 250+ films, which is your personal favourite and why?
“Trancers, hands down. Why? Well, if I may quote Tim Thomerson, ‘Oh man, you got Helen Hunt as your chick, a cigarette, a gun and a trenchcoat… c’mon, it doesn’t get any better, right?’”
Posted by MJ Simpson at 20:06