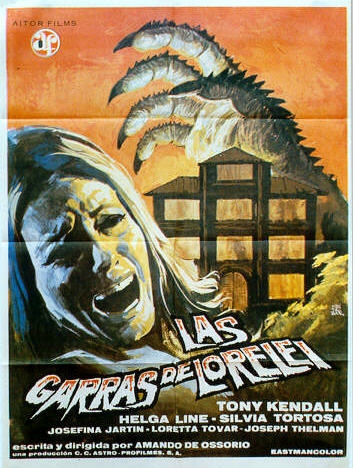 In these days of DVD ubiquity, there are few VHS tapes that will make me stop and look, but when I saw this for a couple of quid on a market stall, I knew that I had to have it. Amando De Ossorio of course was the mad Spaniard behind the infamous ‘Blind Dead’ films about zombie Knights Templar, but he made a few other horrors too, including Malenka/Fangs of the Living Dead, Night of the Sorcerers, Hydra: Monster of the Deep - and this obscurity.

In a small German town on the banks of the Rhine, a young woman prepares for her wedding day tomorrow, when suddenly the window smashes open and into the room comes a snarly, scaly monster, all claws and teeth. We don’t get a good look at it - in fact though it reappears several times, De Ossorio very sensibly keeps the complete beast from sight, hiding it in shadows. Mostly we see only a scaly, green, five-fingered claw, and sometimes we only see the shadow of that.

The townsfolk wonder if it was a bear that killed the woman (German bears must be very agile because it got in through a first floor window!) but a young, blind street violinist who has lived there all his life (though he is later identified as Hungarian) says that the killer was Loreley, much to the amusement of everyone else. Actually he says, “According to the tradition of the seven full moons, Loreley will be transformed into an obscene beast...” - so you can see why they all laugh. 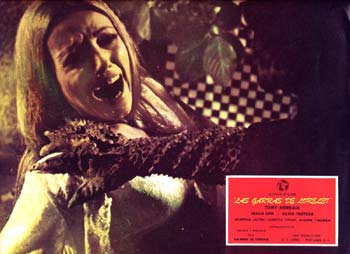 Loreley, we gradually learn, was an ancient German siren who lured sailors to their doom. It’s a legend which is all tied up with the whole ‘ring of the Nibelung’ saga, familiar to fans of Richard Wagner. In these enlightened times, of course, no-one believes a word of it. (Interestingly, the monster is referred to as ‘Loreley’ throughout, never ‘the Loreley.’) Actually I say ‘these enlightened times’ but this is one of those movies where, despite mostly modern costumes and settings, some people still dress like they’ve stepped out of the mid-19th century, just to emphasise that this is backwards mittel-Europe.

Near the town is a girls’ boarding school; we never see any hint of educational activity though we do frequently see the girls in bikinis frolicking in the school pool. There are only about eight or nine of them and they are all in their early 20s, as is their stick-up-her-arse professor Elke (Silvia Tortosa: Horror Express), though the school principal (Josefina Jartin) is a bit older and more relaxed. The town mayor assigns an experienced hunter, Sirgurd, to guard the school from the wild beast and the ‘girls’ are delighted when he turns out to not be a crotchety old git but is actually hunky Tony Kendal (Three Fantastic Supermen, Return of the Blind Dead) in white flares and sunglasses, astride a motorbike.

The killings continue in the town. Another young woman and then the blind violinist. There are several references to the bodies having their hearts ripped out but none of the ones we see have anything more than clawmarks across the face and chest. And who is the mysterious, pale-faced young woman (Helga Line, whose truly amazing career includes Exorcism’s Daughter, Saga of the Draculas, Horror Express, Horror Rises from the Tomb, The Vampire’s Night Orgy plus pepla, westerns, Bond rip-offs and even a Santo film) who watches each funeral from her horse-drawn carriage (driven by a beardy guy in a sort of monk’s cowl)? 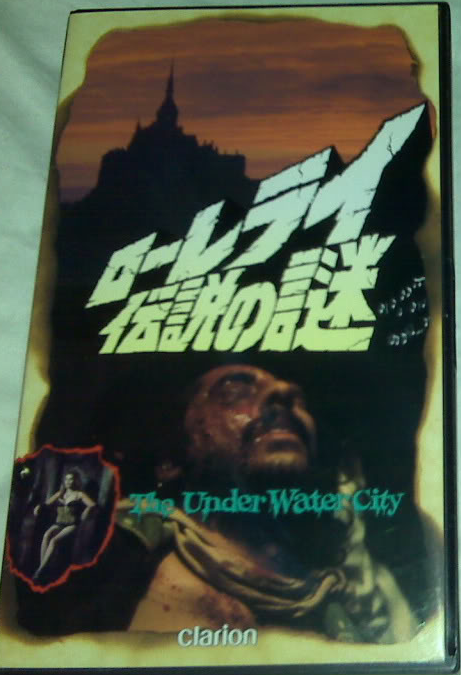 Sirgurd goes investigating and comes across cravat-wearing Professor Van Lander (Angel Melendez: Frankenstein’s Bloody Terror, Hunchback of the Morgue, Ceremonia Sangrienta), the only person (apart from the late violinist) who believes that Loreley is more than a legend. He takes Sirgurd to his laboratory, saying, “Here I have carried out experiments which science would consider fantastic and of course against all the principles of biology as it is understood today.” The Prof’s theory is that Loreley transforms from a beautiful young woman to a hideous scaly monster because she is regressing through thousands of years of evolution. Who would have thought it: The Loreley’s Grasp is, at heart, a remake of The She-Creature!

Van Lander has a detached human hand which he has acquired from the local hospital, and demonstrates how it becomes green and scaly when bathed in a ray of artificial moonlight (this is where the film gets seriously bonkers). His solution to the problem is, naturlich, the Sword of Siegfried! There is no explanation of where he obtained this, or indeed whether it’s the real thing, which is doubtful as it is only about nine inches long. “It has radioactivity,” explains the loony scientist. “It can destroy the cellular mutation of Loreley and send her back into the legendary night from which she has come.”

But who is Loreley? The mystery is about as unmysterious as The Gorgon, the Hammer film which famously pondered who the snake-headed woman could be, even though there was only one female member in the cast. Sirgurd eventually corners the pale-faced woman from the coach in a derelict house beside the river and she does everything except show him her birth certificate. She says she has been around for a long, long time - and indeed that her name is Loreley, which has to be a pretty big clue - and after she and Sirgurd have made love the beardy bloke, Alberic (the great Luis Barboo from Dracula - Prisoner of Frankenstein, A Virgin Among the Living Dead, The Erotic Rites of Frankenstein, Satan's Blood, The Bare Breasted Countess, etc), appears and carries her off into the river, disappearing below the surface with barely a ripple. 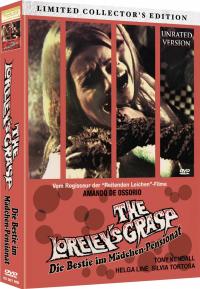 To pass up a clue like that you have to be either the über-sceptic or phenomenally stupid.

Sirgurd however has his eye on the frosty-but-softening Elke who is coming round to believing in Loreley, telling him, “Many serious witnesses have spoken of creatures never classified by Linnaeus...” - this movie is just a treasure trove of such brilliantly clunky lines. Meanwhile, the Professor is visited by Alberic and Loreley - “Good evening, Professor. I am Alberic.” “Any relation to the Nibelung?” - who leave him for dead and destroy his notes.

The film climaxes with Sirgurd scuba-diving into the river where he finds Loreley’s cave, complete with a horde of treasure left her by her father Wotan, and three scantily clad babes who allow him to escape while they are cat-fighting over who gets to shag him first.

What an extraordinary film. It’s not bad actually if you like 1970s Euro-horror: the acting’s passable (though the dubbing is risible) and the direction, as much as can be seen from this overly dark print, is competent. The storyline is enjoyably daft and at least it’s original, rather than being yet another damn vampire/werewolf/mummy/horde of zombies. The monster is monstrous, the deaths are violent and bloody, and the pseudo-scientific explanation is complete hogwash of the highest order. Top stuff.

As well as those mentioned above, the frankly all-star cast includes Lolita Tovar (Curse of the Vampire), Joseph Thelman (Tombs of the Blind Dead), Luis Induni (The Werewolf and the Yeti, Dr Jekyll Vs the Werewolf, The Horrible Sexy Vampire), Sergio Mendizabal (For a Few Dollars More), Mary Sol Delgado (Return of the Blind Dead), Javier de Rivera (Night of the Seagulls, A Dragonfly for Each Corpse, The Awful Dr Orloff), Antonio Orengo (Frankenstein’s Bloody Terror, Tombs of the Blind Dead, Scarab) and Betsabe Ruiz (Werewolf Shadow, Horror Rises from the Tomb, Autopsy).

Make-up artist Lolita Merlo seems to have plenty of credits though no others in the horror/fantasy genre (although her assistant Jose Morales worked on Werewolf Shadow), while special effects man Alfredo Segoviano did duty on The Werewolf and the Yeti and Exorcismo. Cinematographer Miguel F Mila worked on five De Ossorio films including Return of the Blind Dead (which shares so many cast and crew with this that it may even have been shot back to back) as well as A Dragonfly for Each Corpse and Blade of the Ripper. 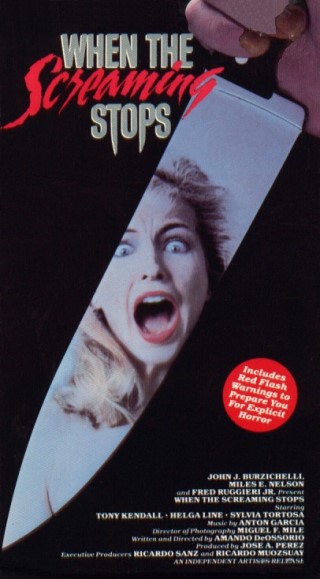 One curious aspect of this film is that what few references I have found to it in my archives and on-line almost all spell the title The Lorelei’s Grasp, presumably because they are just translating the Spanish title Las Garras de Lorelei, but the on-screen title of this print is clearly spelt with a Y. This heavily cropped full-frame version, which loses a good part of both the image and the credits, is evidently an original British print as it carries a BBFC certificate at the start (with the odd title Loreley Grasp). The sleeve of the undated ex-rental video (mid/late-1980s at a guess) titles the film The Loreley’s Grasp but manages to misspell the monster’s name (twice) in the rear blurb as ‘the Lorelie’.

In America such complications were avoided because this was released as When the Screaming Stops. Apparently the US distributor added a William Castle-esque flashing red light before each attack.

At the moment this film seems to be commercially unavailable on either VHS or DVD, so if you see it on a market stall for a couple of quid/bucks, grab it quickly!