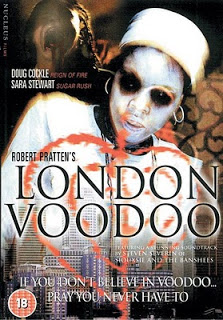 The British horror revival continues apace with this well-produced, stylish, unnerving supernatural thriller. And though its tale of African voodoo in the streets of London may seem fanciful, don’t forget that this was produced the same year that the Metropolitan police recovered an unidentified black child’s limbless body from the Thames, identified as the victim of a ritual murder.

Lincoln and Sarah Mathers (Doug Cockle: Reign of Fire, The Second Coming; and Sara Stewart: Mrs Brown, Drop the Dead Donkey) are an American couple who relocate from New York to Greenwich with their two-year-old Beth (Grace Sprott). Lincoln works for some hideous faceless corporation in Docklands, burning the midnight oil to put together a project for a Swedish client. Former auctioneer Sarah (it’s not relevant but it is mentioned!) lives at home in their expensive townhouse with Beth and a nanny, Halle Berry lookalike Kelly (Vonda Barnes from girl group Madasun).

In the basement, workmen uncover a stone slab, and when Sarah cracks it open she finds two mummified corpses and a variety of religious artefacts - and we briefly see something possess her. Houseboat-dwelling local history buff Fiona (Trisha Mortimer: Frightmare, Schizo) reveals that a couple were believed killed in a house fire at the address in 1902, and her friends, voodoo practitioners Ray and Ruth (David Webber: 51st State, the Uma Thurman Avengers movie; and Jacqueline Boatswain, a stage/TV actress who was one of the dancers in the video for Red Dwarf spin-off hit single ‘Tongue-Tied’!) try to help the Mathers but are rejected.

Gradually, strange things start happening, and gradually they build. Sarah is forgetting things, and then starts behaving provocatively towards the workmen, while also creating concentric heart-shapes in sugar and flour. Or is this really happening? Kelly has her own agenda which involves self-mutilation, steering Beth away from her mother, and a growing obsession with Lincoln - is this related to what else is going on in the house, or is it just one more thing for the couple to worry about? How much of Sarah’s behaviour can be blamed on Lincoln’s workaholic approach? (This is the only horror film in history where a fax machine assumes the status of evil icon!) How much on Kelly’s attempts to undermine her? And how much on whatever escaped from that hidden grave?

When Sarah starts speaking French and becoming violent, even Lincoln starts to realise that something supernatural is going on, and seeks help from Fiona and her associates. The film culminates in full-on voodoo weirdness as Lincoln struggles to release his wife from the restless spirit of a 19th century Beninese warrior which possesses her. Corking stuff!

London Voodoo is an unusual and thoroughly enjoyable movie: slickly directed, nicely designed and exhibiting a bunch of terrific performances (especially from Sara Stewart). This is a genuinely gripping horror flick, using the subtleties of growing menace rather than special effects (such as they are, these are provided by Bob Smoke: Love is the Devil). Voodoo is accurately depicted as a working minority religion - albeit with mystical powers - not just supernatural hocus-pocus. There are also, it should be stressed, no zombies of any sort. This isn’t that kind of voodoo. It is also, somewhat unusually for these days, deadly serious. The closest thing to humour are the meeting scenes at Lincoln’s company; his presentations to the Scandinavian clients (Swedish megastars Sven-Bertil Taube - The Eagle Has Landed - and Michael Nyqvist, recently voted the sexiest man in Sweden!) are full of corporate bollockspeak which is as scarily accurate as it is utterly meaningless. 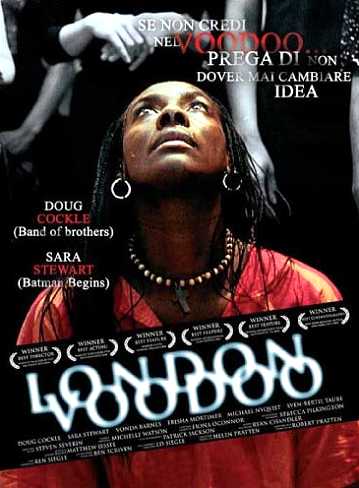 Exhibiting a deft directorial hand, writer-director Pratten ensures that the growing tension never flags. For 98 minutes I couldn’t tear myself away from this film because I had to know what was going on. What was Fiona up to? Or Kelly? Or Ray and Ruth? There are a lot of agendas at work among these characters, and though I’m not sure everything is resolved by the end, nevertheless there is an effective climax as good and evil battle for possession of Sarah’s body.

Pratten is a mature graduate of the London Film School with seven short films under his belt, including Army of Clowns (which may or may not be the same as Clown But Not Out aka Rediscovery...) and Waste Disposal (“an Avengers-style film about the end of an affair between a hitman and a hitwoman”). Swedish cinematographer Patrick Jackson also studied at the LFS and here makes the transition from directing shorts (Before It All Ends, Vigilante) to photographing features. Shot on super-16 over seven weeks in February and March 2003 on an unspecified (but clearly low-ish) budget, London Voodoo is a very promising debut feature and well worth checking out.