Man Who Sold the World 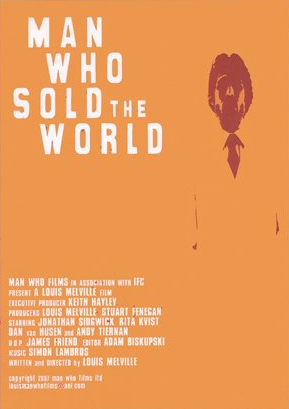 Even from this unfinished version it's clear that Man Who Sold the World is an authentically spooky fantasy and an undeniably original film. The two central performances are both great, the creepy kid is suitably creepy, the sense of paranoia and nightmare is very well built, the transitions between levels of reality/dream are adroitly handled, the locations are marvellous and well-used, the editing is bang-on, the camerawork is great and the music is terrific.

But I would be lying to you if I said I understood the ending.

Jonathan Sidgwick (The Witches Hammer, Bane) stars as Max Trisch who inherits a rambling, antiques-filled stately home from his grandmother and drives out there to take a look. In an upstairs room he finds Zisna (Dan van Husen: House of Blood, Forest of the Damned, Cold and Dark), an Aleister Crowley lookalike priest, helping himself to some thing that Max’s mother had borrowed. Subsequently exploring the local area, Max finds an empty church with a worried Christian priest, Reverend Carmichael (Andrew Tiernan: 300, The Quatermass Experiment, The Bunker), who is evidently in opposition to Zisna.

But mostly what Max sees is an expressionless, silent boy (Alex McNeill), aged about 12 or so and wearing an old-fashioned school uniform. Appearing and disappearing, this ghost leads Max through the woods until he collapses and finds himself revived in the stately splendour of Zisna’s home, from where the charismatic leader controls, via internet sermons, a worldwide cult of ‘Koslantians’. This seems to be a standard end-of-the-world cult: armageddon is a-coming and the Koslantians will be saved and transported to humanity’s true home, a place called Koslantis. Evidently, acolytes can progress through levels as a ‘tapoge’. It’s all a sort of Branch Davidians meets Scientology set up with a heavy dose of Crowleyism. Max, understandably, is polite to his gracious host but remains thoroughly cynical.

Max’s Scandinavian girlfriend Lidija (the lovely Rita Kvist - The Weight of Water, Lime - about whose brief, gratuitous nude scenes you won’t find me complaining) arrives to keep him company. Together they investigate the old house and find evidence that Max’s grandmother was inadvertently responsible for allowing the Nazis to get their hands on the Holy Grail. This ties in with visions of Nazi pomp and circumstance which Max is experiencing, all Teutonic knights and busty Rhinemadchen.

This is one of those films where the weirdness builds relentlessly over the full ninety minutes. Max and Lidija attempt to drive away but however far they go, they’re still within walking distance of the house. Red-jacketed Koslantian tapoges hunt for them; Reverend Carmichael bangs on their door, shouting that the apocalypse is here; Max’s pet python Fido escapes and is never found (a shot of Fido slithering past a half-eaten apple must have some sort of Biblical symbolism, I guess). Most significantly, elements of Nazi concentration camps start to appear with first the creepy boy and then Max himself in stripy prison pyjamas with a yellow Jewish star. (This raises the question of whether Max is Jewish, which seems unlikely as what we are told about his paternal grandmother indicates her to be Christian, possibly Catholic. Maybe he’s Jewish on his mother’s side.) 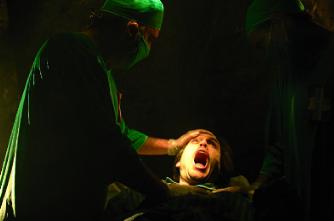 Interspersed with this are interactions between Max and a beardy psychiatrist, sometimes in cutaways, sometimes in voice-overs which sound rather too much like narration. I actually found these quite confusing: at first I thought they were flashbacks to before Max left London, then they seemed to be part of the main story (which left me wondering how Max was able to drive back and see the shrink, then get home so quickly). Eventually I decided that they must be a framing story with everything else as a flashback. The disc I saw wasn’t the final edit so this confusion may be cleared up - or perhaps it’s deliberate.

And that ending? I really don’t know. It’s something to do with stigmata, and Adolf Hitler himself appears briefly in some sort of white limbo. But precisely what is going on, what it means and how it relates to anything else - search me. In some way, Man Who Sold the World reminded me of old European films: plenty of weirdness, middle class protagonists trapped in a nightmarish series of events and no real explanation for the viewer. If this had been made thirty years ago in Spain, Redemption would be all over it. There is also a touch of The Avengers in the dangerous eccentricity hidden away in the English countryside, maybe a dash of The Wicker Man too.

For a first-time director, Louis Melville does a bang-up job. Every time I made a note of something which didn’t seem to make narrative sense, I had to scribble it out two minutes later as the situation was explained in the dialogue. He is greatly assisted by the cinematography of James Friend (Wishbaby, Reverb) and Boyd Skinner (Cargo, Springheel Jack) although there is an unavoidable shot-on-DV flatness to the image. Editors Adam Biskupski and Richard Graham are also to be commended for stitching together such a potentially disjointed story. A fine orchestral and piano score by Simon Lambros (The Last Horror Movie, Puritan) is augmented by a handful of sparsely beautiful songs by Tally Koren. Mark Stevenson, who was so great as the assistant in The Last Horror Movie, appears as a monk with a mask even beakier than the one in HellBride.

Though it kept me gripped to the very end, Man Who Sold the World left me slightly niggled because I don’t know whether I was even supposed to understand the denouement. The whole film goes somewhere - but where? Undeniably skilfully constructed and resolutely intriguing, here is a movie which raises more questions than it answers. Take a look - maybe you’ll spot something I missed.