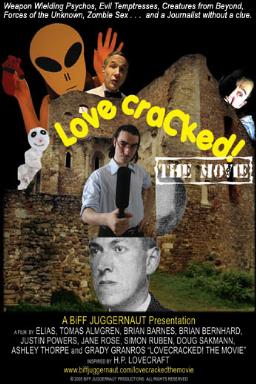 LovecraCked! The Movie surprised me because it’s not what I expected. With its Gilliam-esque cover design, zany title and obligatory Lloyd Kaufman cameo (boy, he gets around!) I thought this would be some sort of Airplane-style gagfest spoofing the work of HP Lovecraft. In fact, it turns out to be an anthology of short, Lovecraft-inspired movies, most of which are actually fairly serious.

Linking these shorts is a spoof documentary of a TV reporter trying to find out the truth about Lovecraft. These segments, including one where Uncle Lloydy answers every Lovecraft question with a plug for Troma, are enjoyably silly, helped greatly by a straight-faced performance from Elias, the unimonickered director of the links who conceived and co-ordinated this project, as the reporter.

This all sounds like a weird mixture of stuff - dumb and serious in equal measure - which shouldn’t work, but somehow it does, sort of. Without the comedy linkage, the HPL shorts would all get a bit much, and a whole 90 minutes of low-budget Lovecraftian lampoonery would be, I think, more than most people could stand.

The shorts themselves vary enormously. The weakest is Justin Powers’ (Pot Zombies) History of the Lurkers which contrasts a punk guitarist and his nerdy flatmate in a nothing of a story based solely on the weak pun that ‘lurker’ could also be used to describe someone who ‘lurks’ in porno bookstores. At the other end of the spectrum is Tomas Almgren’s Bugboy (co-written with Rebecca Finley), artfully shot silent in black and white, about a young man who wraps himself in a cocoon - although this seemed to me to be more Kafka-esque than Lovecraft-ian. Also unnerving is Ashley Thorpe’s Remain, a stop-motion animation about a painter. 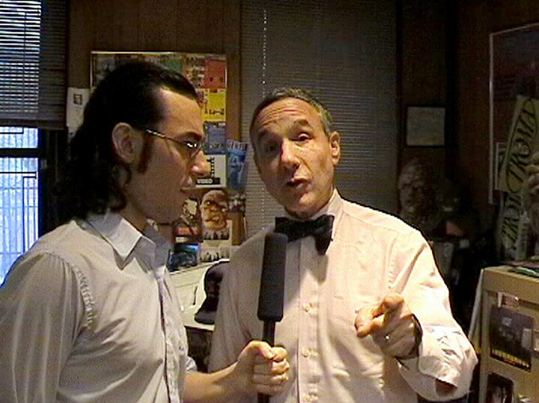 Probably the most professional, apart from BugBoy, is Witch’s Spring, about a young man whose date has unusual interests. This segment of the film, originally produced in 2004, is actually British (as is Remain). Actors Tom Wontner (TrashHouse) and Gillian MacGregor - who were both in a Jack the Ripper feature I hadn’t heard of: Jack, the Last Victim - are also credited as co-writers, alongside director Brian Barnes.

Elsewhere we have Jane Rose’s The Statement of Randolph Carter which is suitably Lovecraftian but never really goes anywhere; Grady Granros’ Chaos of Flesh (written by Tomas Almgren) which is short and complete but with an obvious twist; Simon Ruben’s atmospheric marionette short Alecto (co-written with Robbie Simons, featuring Nancy Kwok from Dead Wood); and Brian A Bernhard’s zany Flash animation And This was on a Good Day.

The anthology format has its advantages and its disadvantages. Where a short doesn’t work, there will at least be another one along in a few minutes, but the ones that do fail bring down the average quality of the feature. There’s very little to remember about LovecraCked, beyond the jokey linking sequences, so shorts which might have stood out on their own get lost in the jumbled memory of the whole film. 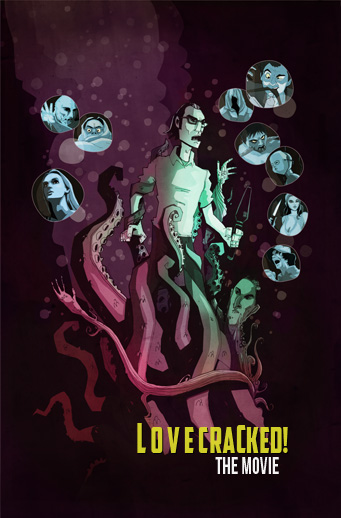 Surprisingly, they also vary from obviously Lovecraft-inspired to remind-me-what-this-has-to-do-with-Lovecraft-again. On the other hand, one thing that does work, in a sense, is placing the shorts within a humorous framing story as that provides a cleaning of the cinematic palate between each tale.

Taken as a sampler of short vaguely Lovecraftian films, LovecraCked! The Movie is exactly the sort of mixed bag that one would expect. If it doesn’t completely succeed, that’s mainly because it’s not clear precisely what it was trying to achieve. Still, at least it’s something slightly different in the never-ending stream of HPL-based movies.

But I’m still waiting for an Airplane-style Lovecraft comedy.