In February 2014, Christian James and Dan Palmer were kind enough to answer a few questions by email about their brilliant zombie comedy Stalled. 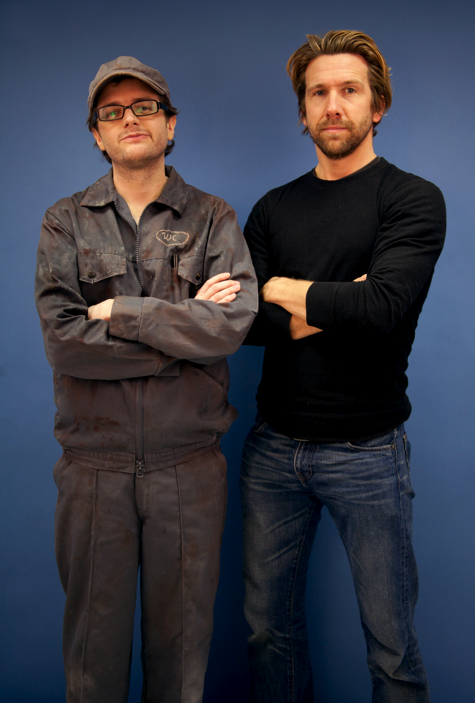 Why has it taken eight years for you to follow up Freak Out? What have you been doing all that time?
DP: “Good question. I have been asking myself that! I think that is a question for the British film industry. We had a lot of positive reviews and, considering that the film was a home-made 16mm affair made by a bunch of inexperienced film students, it garnered impressive distribution via Anchor Bay/Starz in both the States and the UK. Alas varying factors worked against us. Firstly; the head of Anchor Bay Mo Claridge, a wonderful guy who ultimately gave the film the thumbs up after Martin Myers had brought it to him, passed away. He was championing us and wanted our next project to be with them; when he died the change of guard were not as supportive. Other companies just saw the film at face value and didn't have the same mind-set as festival goers and those that were reviewing us - 'Imagine what these guys can do with a budget!'

CJ: “We have been trying, honest. After Freak Out we plugged away with a follow-up but we never found a decent producer to be the all important third leg of the tripod.”

DP: “Somewhere in that time line I had a TV show with Vic and Bob's company and was asked to constantly re-write it for 18 months until it was dumped... and I didn't get paid a dime. We wasted a lot of time with a few fair-weather producers and various feature projects almost got on their feet but ultimately collapsed. Most notably a tongue-in-cheek monster movie that was prepped, cast, story-boarded and location scouted. For reasons I am still not sure of, it went belly-up at the eleventh hour. The silver lining was we met Richard Kerrigan and Daniel Pickering via that production who ultimately read the Stalled screenplay, loved it and got it up and running.”

Why did you choose to make a zombie comedy given that (a) comedy is notoriously difficult to do on a low-budget, and (b) the world is not exactly short of zombie films?
CJ: “Two very good points. I didn’t want to make a zombie movie. Going back several years, I thought that the zombie genre was saturated enough. Walking Dead hadn’t even aired at that point, little did I know that the flood gates were still opening. Dan and I had been kicking around a few ideas, I was favouring something simple, high concept but we just weren’t settling on anything. A bolt of inspiration took a hold of Dan and he spat out a first draft of Stalled rather quickly. Threw it my way with no set-up, no pre-amble. Just said ‘read this’. So it read like a containment comedy/horror that happened to have zombies as an ingredient... and that’s how it feels to me. Naturally, everyone is selling it as an out and out undead fest.” 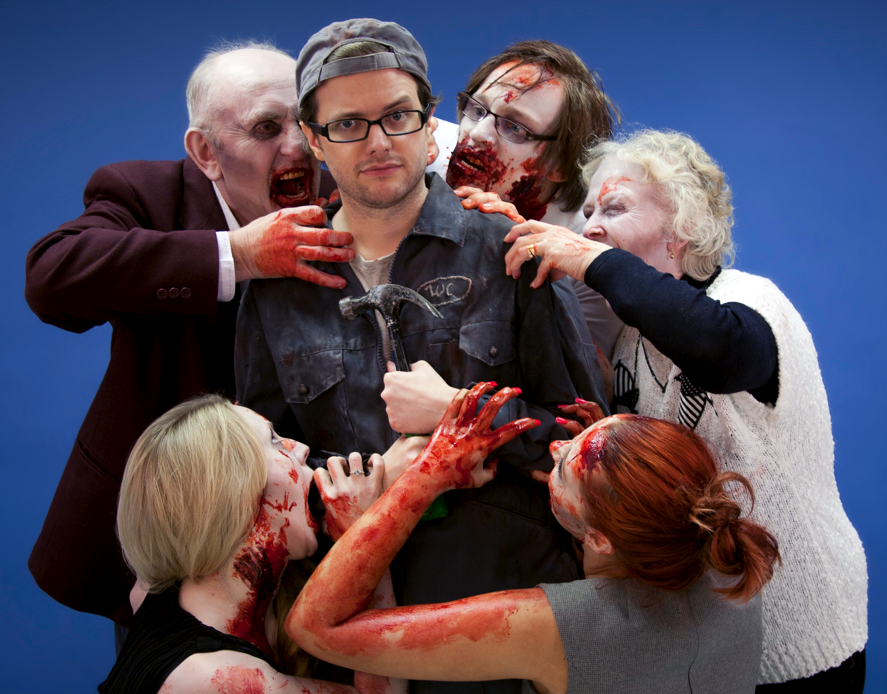 DP: “It wasn't so much a choice as a constantly evolving idea that had popped into my brainium from when I was a kid watching Day of the Dead for the first time. Wondering why Steel doesn't hide in a closet at the end of the film? Then I realised if he did that, he would be trapped in a makeshift coffin surrounded by a sea of zombies! That idea bubbled back up when I was now a self-proclaimed writer and it just seemed too delicious to ignore.”

CJ: “Point B - yeah, to me, zombie movies had become about head shots and crazy ways to rip apart your characters. A great zombie movie has very little to do with zombies in my opinion. They effect the narrative, drive it forward, forcing it down a path, but it’s about the characters on that path not the undead in pursuit. In reality, I didn’t see it as a zombie movie. I knew it would be a selling point that could be latched onto, but I saw it as more of a quirky, containment comedy/thriller. And I think that still holds. Zombies are just another ingredient in this odd, indie thriller.”

DP: “We did have that conversation; can it be anything else but zombies? But it really couldn't. We understand that there are a lot of zombie flicks out there at the moment, but most of them exist solely because it is a quick buck. Stalled comes from a genuine place with a genuine love of the subject matter and I think audiences have acknowledged that.”

CJ: “Comedy? Yeah, it’s really quite hard to do comedy, it’s especially hard to do it with someone who doesn’t understand the importance of timing. Fortunately, Dan is all over that shit - he digs Rick Moranis as much as Rick Baker, he swings both ways. In my day job (directing commercials and purse snatching) I often work with actors who ‘try’ comedy and it’s always painful. You have to have it intuitively and often times, acting funny doesn’t mean it’s funny on set. Dan and I had more serious discussions about a ‘gag’ than we did anything else. You analyse what’s funny, dissect it until it isn’t funny, then shoot it! Anyhoo, I haven’t answered your question... er, why! Well I guess we just get fired up by it. Although, again, I didn’t see Stalled as much of a comedy. I felt it had a healthy dose of laughs in there but it was just a weird, indie, horror, thriller thing. But I think when we get on shoot we tend to root out the funny bone a little.” 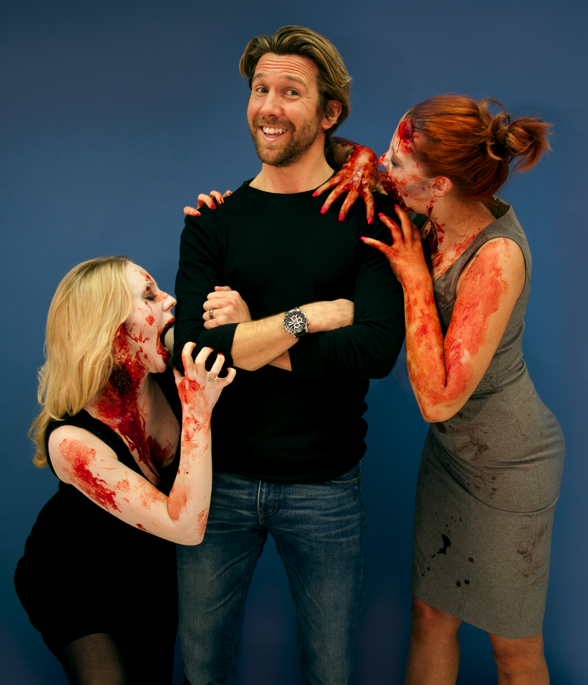 Can you describe the practicalities of shooting a film on one small set?
CJ: “Well it’s quite practical in that all your props, costumes, catering etc just need to be sent to one place. There are no location changes so, after Day 2, no-one can be excused for getting lost on the way to set. The downside is that you go a little crazy spending 14-hour days in a tiny box for three weeks. Your mind starts to play tricks on you, days all blend into one. Storyboarding like crazy is a big must. Just follow those, have faith in your planning and everything will work out... or at least, just keep telling yourself that whilst you shoot... and know that sound and music will disguise a multitude of sins.”

How has Stalled been received so far, and what are your plans for distribution?
CJ: “It was a slow start. We finished the movie late 2012. Had a cast and crew screening in November at Bafta. This seemed to go down well, but 90% of those cats worked on the movie so they’re attached in some way. So late November/early December we started invited UK industry types to private screenings. Barely anyone turned up – those good ol’ forward thinkers! So, undeterred, we continued. Posting our trailer online, Slashfilm.com got wind of our high concept and gave us a mention, this turned into a healthy amount of hits and got us under the nose of a forward thinking Australian sales agent. They snapped up Worldwide rights and took it to Cannes. Got it into every major festival and distribution deals in the UK, Japan, Australia, Germany, France, Canada and America to name a few. Some of those territories even enjoyed a small theatrical outing too. The festival reception was fantastic, capped off with three sell-out screenings at Frightfest and winning the Melies d’Argent at LIFF (Sweden). It should be on Blu Ray, DVD and VOD pretty much everywhere in the next couple of months.”

DP: “It will be released in the UK via Matchbox Films on Blu-Ray and DVD on February 24th, you can order it on Amazon and all the usual places. It is out in the States via Phase4 Films on March 4th and also widely available on VOD. The response has been over-whelmingly positive. Festival audiences have been amazing and the reviews have been brilliant; Kim Newman, Alan Jones, Ain't It Cool, Twitch Film... and of course MJ Simpson... whoever that is!”

What are your views on the 21st century British Horror Revival, and your part in it?
CJ: “Crumbs, er... there is one? And I’m a part of it??? Well I’m just doing my thing with my fellow filmmaking buddies. We always operate outside of the UK industry - we don’t want to cast East End gangsters in our movies and we like to maintain good relationships with our crews. I suppose time will tell if we’re a part of that revival, I hope it inspires others to get out there and do the same.” 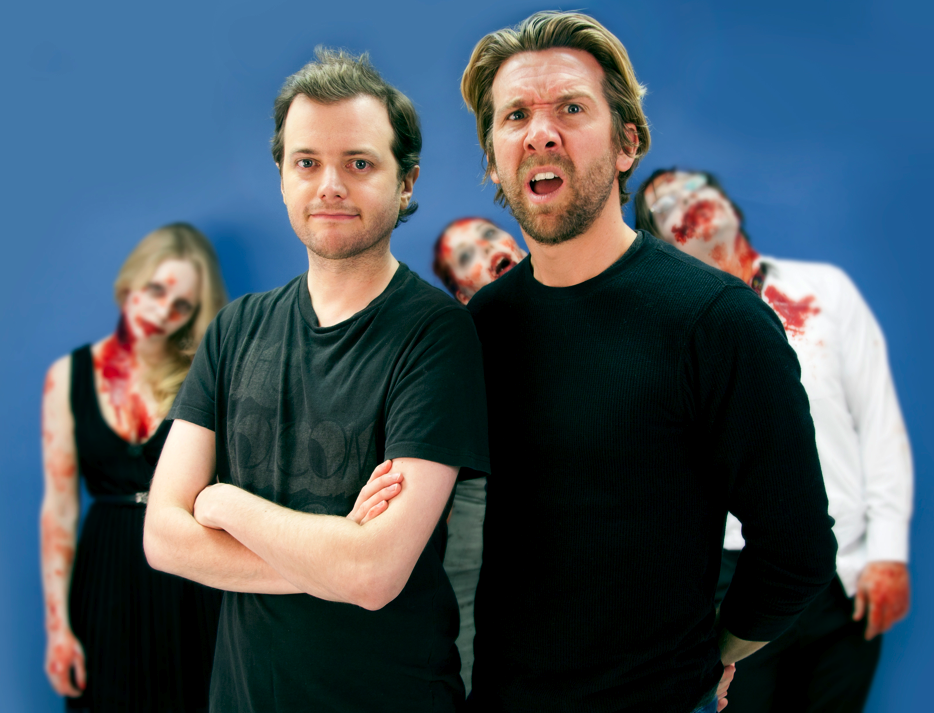 What are you planning to make next and might we see that a bit sooner?
CJ: “Well I recently directed a short little film/sketch starring Holiday Grainger and David Oaks. That should be popping up online shortly, all for a good cause too! Dan and I have several projects in development. One or two have people/deals in place but a lot don’t. The beauty of having such a gap between our first and second films is that we’ve been developing so much material, all of which I love. It’s just a case of pairing it up with the right people. Onwards and upwards I hope.”
Posted by MJ Simpson at 18:10