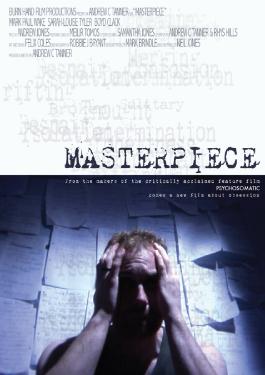 There’s really not a lot to say about Masterpiece, the second feature from Andrew Tanner. It’s very, very good. But my God, it’s depressing.

That’s about your lot, really.

Mark Paul Wake delivers an absolutely extraordinary performance as Martin, an aspiring writer whose obsession to write his epic novel threatens to destroy him. Martin is a thoroughly unsympathetic character - a self-obsessed, self-centred, deluded monomaniac with a callous disregard for the concerns and feelings of those around him.

Not that he exactly has a big social life. Just his tolerant, long-suffering girlfriend Kate (Sarah-Louise Tyler: High Stakes) whose tolerance, like anyone’s, has a limit. And Rod (Boyd Clack, from Welsh sitcoms High Hopes and Satellite City) - beardy, sincere tutor on Martin’s creative writing course who wrote a couple of books himself once in the day.

There’s no real plot to describe here, just a slow, inexorable descent into madness and pain, a self-destructive downward spiral fuelled by anger, booze and misplaced belief that the world is waiting for this one random, rambling work. We’re not told anything about the content of Martin’s novel, we just see him writing it endlessly, day-after-day, in longhand on lined paper. Page upon page upon page, stacked up inches deep. Page after page after page, taped to the walls of Martin’s study from where he refuses to emerge. He is literally living inside his book, literally wrapped up in his work. 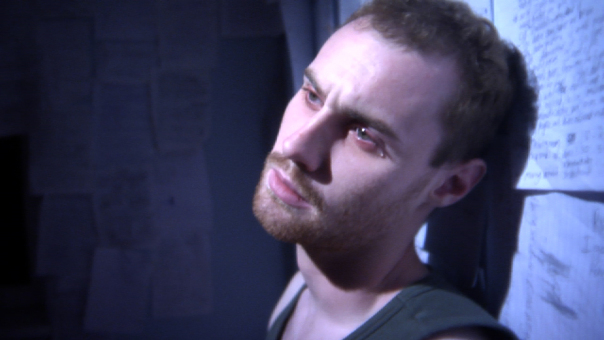 Eventually things come to a head when Martin encounters a stranger in a pub (gamely played by co-writer Rhys Hills with undisguisable glee), an almost spiritual figure, a johnny-come-lately Mephistopheles whose advice will resolve Martin’s situation one way or the other. Does this bleak, angst-ridden tragedy have a happy ending or fade to black? Either could be narratively satisfying. I’m giving nothing away.

Much of the music used throughout the film is Erik Satie’s Gymnopedies and they fit the pace and structure perfectly. The whole film feels like a gymnopedie, an endless repetition with subtle variation that travels without ever going anywhere, the gentlest of musical or dramatic gradients which continues down forever.

The central performance is magnificent; Martin is a gift for an actor and Wake has embraced the role fully. This is the sort of acting that wins awards - and indeed, the day after I drafted this review, Wake picked up Best Actor at the British Independent Film Festival! The rest of the cast are flawless too, especially Tyler who pulls off some disturbingly emotional scenes. Kudos also to cinematographer Robbie Bryant (camera assistant on The Feral Generation, Burke and Hare, Cockneys vs Zombies and Captain America: The First Avenger!) whose photography is spot-on, complemented by Tanner’s own razor-sharp editing.

If there’s a mis-step in the film (hey, nothing’s perfect) it’s the sequence where Martin is fired from his part-time job as a hotel cleaner. Despite his antisocial attitude, obsessive nature and arrogant belief that he is better than the other minimum wage monkeys, the actual trigger for his dismissal is an honest mistake. A moment of genuine concern and an uncharacteristic attempt to do the right thing backfires.

There’s no doubt that his well-meaning boss uses this as an excuse to let Martin go, but there’s no real acknowledgement of the utterly cruel irony in this situation. Apart from that though, it’s hard to fault Masterpiece (which is just as well, given the presumptive title!). The whole thing is a step up from Tanner’s promising debut Psychosomatic, both technically and artistically. Neil Jones executive produced the film for Burn Hand Films which is becoming quite the movie factory nowadays. 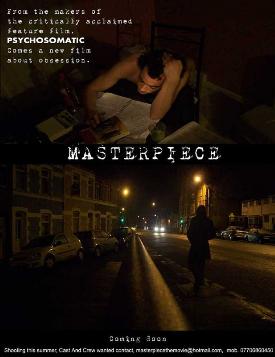 The cast includes Ieuan Rhys (who was a traffic cop in Darklands and spent 13 years in Welsh soap Pobol Y Cwm), Gareth King (also in Burn Hand Films’ The Reverend and Risen), and Madeleine Havell who, along with Sarah-Louise Tyler, was in a previously unknown 2008 horror anthology called Dreaming of Screaming. Art director Felix Coles also worked on Jack Falls, Panic Button, Kill Keith and for You-Know-Who on Eldorado.

Though there is a little violence, Masterpiece is by no means a horror film. I would hesitate to even call it a thriller, it’s really a pitch-black psychodrama, intense and strangely compelling despite its 104-minute running time.

And that short review really is your lot. Masterpiece: brilliant film, bloody depressing.

Email ThisBlogThis!Share to TwitterShare to FacebookShare to Pinterest
Labels: 2011, UK