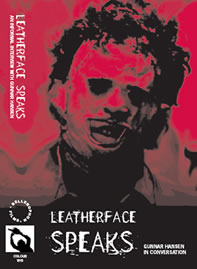 In 2000, Gunnar 'Leatherface from The Texas Chainsaw Massacre' Hansen and David 'Him out of Last House on the Left' Hess toured the UK with prints of these two notorious films. TCM had recently been passed 18 by the BBFC after being banned in the UK for 24 years, while LHOTL is still in fact banned to this day although UK law allows it to be shown in specific venues if local authorities give permission (Leicester and Bradford are two such places).

Tony Earnshaw, film programmer for the National Museum of Photography, Film and Television in Bradford (and author of Beating the Devil: The Making of Night of the Demon) invited Hansen, Hess and the movies to his venue and, in partnership with Jim Moran, recorded this 21-minute interview (Tony can be heard asking the questions, Moran was holding the camera).

This is simply Hansen, sat in front of a Texas Chainsaw Massacre poster in a public area of the museum, discussing the film that made him famous. Chatter and music can be heard in the background and at one point there is a brief off-screen interruption (which Hansen handles with an ironic, "Excuse me, I'm a star."); in fact this gives the impression of having taken not much longer to film than it does to watch. There are a few cutaways (possibly to cover edits) to TCM posters or stills and a brief shot of Hansen signing autographs, with Hess visible in the background. But for the most part this is a talking head, starring a big, scary, Icelandic version of Kenny Rogers.

It works because Hansen is a very erudite and eloquent speaker who doesn't fumble or hesitate and takes every question in his stride, even the ones when he has to preface his reply with "I don't know...". It goes without saying that Earnshaw knows his subject and probably already knew the answer to every question he asked - it's not like Gunnar Hansen hasn't been interviewed plenty of times before - but the two of them quickly settle into a comfortable interviewer/ee relationship that allows the anecdotes to take centre stage. 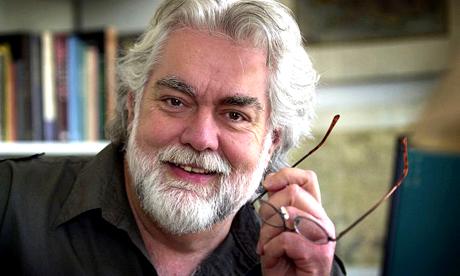 I've never met Hansen but he comes across as a genuinely nice bloke who is not only appreciative of the opportunities which his limited fame has given him (and of the fact that it is indeed limited and he is rarely recognised in public) but has also bothered to do his own research over the years into the origins and influences of his first and best-known screen role. This simple format works perfectly in allowing his memories and his opinions to be expressed simply and clearly.

Apart from a couple of screenings at small festivals, Leatherface Speaks has very rarely been seen (this tape was personally leant to me by Tony Earnshaw). A similar interview was conducted with David Hess at the same event but this has apparently never been shown anywhere. This would make a perfect extra on a DVD and should definitely be sought out as a supporting short by any cinema planning a special screening of TCM (unless of course they are lucky enough to have Hansen there in person). Perhaps Earnshaw and Moran could track down a few more horror icons (Doug Bradley? Robert Englund?) and edit four or five such informal interviews together into a feature-length documentary.