Frazer Lee is one of the best new hopes for British horror. The first short from his Robber Baron Productions set-up, On Edge (based on a short story by Christopher Fowler) starred horror icon Doug Bradley and was extremely well received. Lee and Bradley reteamed for a second short in 2003, Red Lines, with a view to further collaboration, and the writer/director took the time to answer one of my infamous six-question mini-interviews. 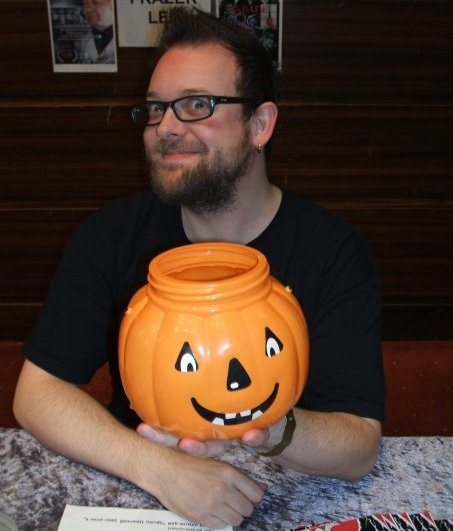 How did you first hook up with Doug Bradley?
“Doug Bradley was my first choice for the role of Doctor Matthews in On Edge. I sent him a screenplay through his agent, who advised him not to do it because we had very little money. Doug was familiar with Christopher Fowler’s work and said he loved my adaptation, so he agreed to do it. We met up and I pitched a few other film ideas to him - and we still hope to make those in the future.”

Without giving too much away, what is the basic premise behind Red Lines?
“Red Lines is the tale of a school detention gone horribly wrong. Kirsty Levett plays Emily, a schoolgirl who has to write lines because she’s been caught running in the hallway again. Doug Bradley is her teacher and Leone Hanman plays what can only be described as a ‘supernatural force’. I was very much inspired by classic, atmospheric horror The Haunting by Robert Wise, and the Ringu trilogy. I wanted to explore atmospheric psychological horror storytelling. All the recent media coverage of murdered schoolgirls was almost as gross as the murders themselves to me, so I think I was reacting against that too.”

What did you learn from On Edge that has helped you in making Red Lines?
“On Edge was big budget compared to Red Lines, which came about when the guys at Urbanchillers.com challenged me to create a five-minute horror movie. It is incredibly difficult to tell a story in such a short amount of screen time, but I think we pulled it off. The biggest lesson I learned from On Edge is to surround yourself with the best talent you can find, and to professionally drive the project with humour and enthusiasm. Spotting and seizing opportunities is a key factor in filmmaking - we turned On Edge around in seven months and Red Lines was scripted, filmed and edited in just one month.

“On Edge was strongly visual, with lots of POV shots and expensive opticals and prosthetics, but it still relied heavily on dialogue to tell the story. Red Lines has a tiny bit of dialogue but tells the story mainly through the visual information. We shot On Edge 35mm Cinemascope, which was a beautiful luxury, but Red Lines was shot digitally due to time and budget constraints. Post-production experience from the first movie taught me to visualise the entire project from script to finished film - and luckily I had amazing technical support for Red Lines with a full digital grading process. I learned a lot from both films and hope to take it to another level with the next project.”

Why are you turning your feature screenplay Urbane into a graphic novel?
“Bottom line, I love graphic novels and am a big fan of Shane Oakley’s incredible artwork. I’m really excited to be publishing my first comic book! From a practical angle, it is incredibly difficult to make the leap from directing short films to directing features. Studios and financiers see you as a high-risk investment, it seems. Hopefully the graphic novel will land on the right desk one day and help convince someone, in a position to greenlight such a project, of my vision. Also, Urbane has reached Draft 8 and I realise that further rewrites may be necessary before shooting the film. The graphic novel gives me the chance to make a kind of ‘director’s cut’ version of Urbane, at least on paper.”

What can you say at this stage about URbrain?
“URbrain completes a trilogy of shorts featuring Doug Bradley. It is a dark and twisted tale set on the London Underground, inspired by a sequence from the Urbane screenplay. To put it bluntly, a young lady makes a journey she wishes she’d never made at all! We found an amazing location in the form of Aldwych, a disused Tube station - very creepy. Director of Photography Alan Stewart is hyped at the prospect of shooting down there, and we both believe URbrain can be fricken fantastic if we secure the funding to make it.” 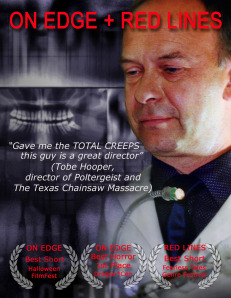 What is your long-term plan beyond these shorts?
“If and when URbrain is in the can, I intend to release all three shorts on DVD with interviews, out-takes and bloopers. I’m confident Doug Bradley fans would embrace such a package, as we get e-mails from horror aficionados all the time asking for the shorts on DVD. Hopefully, the DVD and graphic novel will help in pitching feature projects. I have a few features in development besides Urbane, including an incredibly exciting project called Crowleymass. I’d like to collaborate further with the amazing people I worked with on the first two films, and to continue stretching myself as a writer and director. British horror still needs a good kick up the arse and I am dedicated to doing just that.”