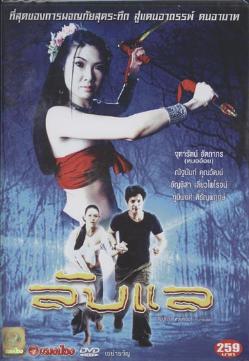 Why is is that the films without subtitles are always the talkiest? Ah well...

This recent Thai horror/fantasy starts with a gang of crooks shooting it out with the cops as they try to escape through the jungle. Suddenly a sort of magical portal thing opens up, sucks them through and then vanishes.

The quartet - whom, for the sake of argument, we will call John, Paul, George and Ringo - find themselves somewhere else, in the open countryside near some mountains. Obviously I can’t determine to what extent they debate the bizarre metaphysical phenomenon that has delivered them there, safe from the cops’ guns, but anyway they set out in search of civilisation. And they find it: a village which is populated entirely by women.

Although many of the inhabitants are beautiful young things, as is traditional, I must give this film credit for also including old women, fat women and little girls, suggesting a functioning society. The ladies seem pleasantly surprised by the arrival of four young chaps and clearly understand what men are and how they should relate to them. But if there is any explanation of how this all-female society exists in perpetuity - or indeed, just where they are - then obviously that passed me by.

In flashbacks we see that Paul is not in fact a crook but became involved by accident. In a bar, he bumped into his old friend John and they had some drinks then went back to Paul’s place. When a drunken neighbour barged in and threatened Paul, John took it on himself to brain the guy with a handy trophy; Paul was shocked but helped to put the body in a cupboard. Cops later discovered the body and arrested Paul but he was sprung from a police van by John and two buddies (George and Ringo) posing as cops. By this sequence of events, he found himself party to murder and directly involved in a bank heist.

The four lads are offered sumptuous food and then John, George and Ringo all head off for nights of wild passion with their designated lovelies. Paul, however, politely declines both the offered booze and the attentions of his companion (whom we’ll call Linda). The two get to talking and eventually fall in love.

Meanwhile, Ringo has discovered that the village has a plentiful supply of gold nuggets, stored in a hut guarded by two heavy ladies armed with axes. The next night, while John entertains the ladies, Ringo and George sneak down to the hut, club the guards to death and take two sacks of gold, which they bury in the woods (watched by an unseen Paul and Linda). The two villains return to the table where John continues to hold court but the two guards turn up, blood on their faces but very much alive. The assembled women advance on the three men who find that their guns have no effect: whenever they fire a bullet it is absorbed by a sort of magical vortex that appears in front of the intended victim.

The ladies’ weapons of choice are a sort of wooden trident, looking not unlike a deadly rake, which they use to impale each of the men through the midriff. George suffers a particularly nasty fate when he falls into a pit and a trident-thing drops from above. In a smooth piece of editing which makes this appear as single shot, the camera then dollies forward and tilts down to look into the pit where we see George impaled. There is also a gruesome (but very dark) shot of one of the trio being physically ripped in half by the women, and John gets decapitated into the bargain.

Of course, the woman also want John but Linda wants to save him and a stand-off develops between Linda’s mother (who is probably some sort of old wise woman) and the village leader (the young lady depicted, axe in hand, on the DVD sleeve). At that moment, the magical portal from the start of the film opens up behind Paul and Linda and they fall through it, rendering the point moot. The film ends with the cops surrounding Paul as he lies, crying, at the foot of a tree, cradling Linda who has become a skeleton. Somehow. A brief epilogue shows another gang of crooks going through the portal.

Once it gets going, this is a gruesome and effective horror film - but it doesn’t get going until very near the end. We could have a had a whole third act of the women hunting the men, picking them off one by one, but instead from the moment the two guard’s heads get bludgeoned to the mother-vs-leader stand-off is about five minutes, if that. It may be that the characterisation and plot development throughout the movie is enough to carry it if you speak Thai, but for those of us looking to enjoy a horror film, this delivers too little too late.

As usual with modern Thai horrors, the production values seem good, the effects are credible and the cinematography is top-notch. This is a well-directed film and probably well-acted though it’s always difficult to tell when one doesn’t understand a word of the language. So Lub Lae is okay for what it is, but what it is is not what it’s advertised as. I don’t think that a fantasy romantic crime drama can be classed as a horror film just because its has five minutes of horror at the end.