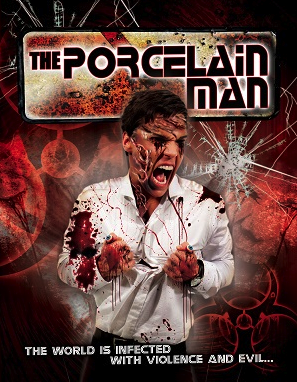 This film was sent to me several years ago and at the time I was unfortunately unable to review it because for some reason the disc wouldn’t play in my machine. This week, I came across the disc and thought what the heck, let’s see if my current DVD player will accept it. Lo and behold, it worked perfectly.

Sadly, it wasn’t worth the wait.

Let me just, before launching into the review proper, tell you about Stone Man. Stone Man was an Italian superhero thing touted around in the early 1980s which never, so far as I know, actually got made. But it had a super poster. And I remember someone in Starburst - possibly John Brosnan - bemoaning that it was a real shame the Italians didn’t put as much effort into their movies as they did into their advance publicity materials.

Well, a similar thing applies here. On receiving the disc, and indeed for several years after, right up until this week, I had assumed that The Porcelain Man was a low-budget but professional movie. It had a slickly designed DVD sleeve and quite the most professional-looking full-colour promo pack I had ever seen for a low-budget UK indie film.

But when I finally got to see the thing, it turned out to be a 94-minute home movie. Utterly amateur on every artistic and technical level and, as is so often the case with these things, woefully unaware of its own massive shortcomings, The Porcelain Man is self-indulgent, unwatchable rubbish. Which is a shame. 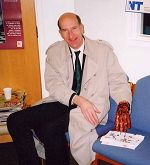 The creative force behind the film was writer/producer Colin Bickley who, according to the website and glossy press pack, first came up with the idea in 1993. Although it’s unlikely he came up with the whole idea because the opening scenes are a rather obvious rip-off of 28 Days Later. On the other hand, 28 Days Later was released in November 2002 and The Porcelain Man allegedly started shooting on 4th December 2002, so maybe it was just synchronicity. Let’s give them the benefit of the doubt. Christ, they need everything they can get.

You will recall how 28 Days Later started with some animal rights activists trying to ‘liberate’ a bunch of infected chimpanzees from a lab staffed by the funny-faced bloke off The Friday Night Armistice. Well, The Porcelain Man also starts with a deadly virus escaping from a lab due to the activities of anti-vivisectionist idiots. Except that Colin Bickley and his chums don’t seem to have really grasped the idea of animal rights activists because the two young men who murder a security guard, break into a lab and murder the scientist they find there later discuss how they did it for the money. Look, either these are hired goons or they are tree-hugging psycho animal rights loons. They can’t be both and the latter do not employ the former.

Also - and frankly I’m surprised this would ever need pointing out to anyone - the labs that animal rights activists break into tend to have, you know, animals in them. And the activists tend to make off, where they can, with the animals.

This lab (filmed at Aston University) has no animals, there is no suggestion that it contains any animals and the balaclava-wearing hoodlums who break in don’t look for animals. Instead they demand “Where is it?” and are told “Here it is,” as a terrified lab assistant hands them a rack with a couple of unlabelled test tubes of blue liquid. So in what sense are these animal rights activists, except in the sense that you had just watched 28 Days Later and thought: ooh, that’s a good idea?

It sort of reminds me of all those dodgy Terminator rip-offs which used the term ‘cyborg’ without bothering to check what it meant. Arnie was a cyborg because he was a cybernetic organism, part machine and part living being. That was essential in order for him to travel back through time, wasn’t it? Part organism, part robot. A bit like the Six Million Dollar Man who originated, as we all know, in Martin Caidin’s novel... Cyborg.

I mean, it wouldn’t have been hard. Borrow a pet rabbit or a couple of white mice from someone, film them in close-up from a few angles, maybe changing a sign on the cage to look like there’s a bunch of them, then film your lab scenes creatively and add animal atmos to the soundtrack in post. How hard can any of that be?

Sadly, after this prologue the rest of the film is not ripped off from 28 Days Later or any other film that I know, which is a shame as that may have given me a clue as to what is going on. It’s some sort of police procedural, and the virus spreads gradually through human contact, and an old guy who may be a scientist sleeps in the nude and keeps getting phone calls in the middle of the night, and all sorts of people get killed, and there’s a police inspector with the biggest (non-prosthetic) nose you’ve ever seen, and there’s the world’s least exciting car chase around a multi-storey car park, with both drivers rigidly observing the 5mph speed limit.

And the whole thing, while it claims to have cost £5,000, looks like the film-makers may have got £4,990 change back. Because this really is the cheapest, tattiest, most ludicrously over-ambitious piece of amateur rubbish I’ve seen for a while. It makes no concessions to its minuscule budget and inexperienced cast and crew but just blithely charges ahead, somehow convinced that it’s going to end up as a watchable film. Which was never, ever going to happen. Because a watchable film can only start out with a decent script.

Like far too many ultra-low budget British action films, there is absolutely zero characterisation. I couldn’t tell you what any of these characters are called, what they do, who they are, how they relate to any of the other characters, what their motivations are, where they come from, nothing at all could I tell you about them. And it’s clear that the film-makers couldn’t either. All we know is that they all like to spout clichés and run around pretending to shoot at things.

Oh, and there are zombies in this film.

You might think I’ve left it a bit late in the review to blithely mention the existence of the living dead. But that’s because the zombies themselves barely feature. They’re in maybe two scenes and they’re discussed in a couple of other scenes (using the Z-word) but otherwise you could easily miss them. It’s absolutely extraordinary. Why would you film a zombie movie and almost entirely neglect to feature or mention zombies? This is just the most half-arsed, half-hearted, pointless zombie film I have seen in a very long time because There Are Almost No Zombies In It.

It’s possible that one reason the zombies are so limited in their screen time is because they are really, really crap zombies. You know, the world isn’t short of aspiring make-up effects artists who know how to do a zombie and are willing to pitch in on a project so they can get a feature credit on IMDB. And while there were fewer such people in 2002, they were certainly out there.

But these zombies just look like they’ve had a bottle of ketchup poured over them, which makes the often ludicrously purple dialogue even more risible as characters are repulsed by these ‘rotting corpses’ and then amazed when they somehow ‘come back to life.’ “He was dead. I saw him. He was dead,” emphasises one character whose name (like all the rest) I don’t know. But what he saw was what we saw: someone who appears to have had a drunken accident with a ketchup bottle shortly before collapsing into a coma.

“Have you ever seen anything like that?” asks another (or possibly the same) character in another scene, staring in horror at his hand which has a small violet blotch on it. Actually yes, I have seen something like that. I remember it distinctly because it was the last time that my pen leaked. This disconnect between dialogue and image reaches its apotheosis with a character explaining how his hands are now covered in whatever this is, except that he’s explaining over the phone so we can actually see one of his hands and it’s as clean as a whistle.

Although that’s not the only disconnect between soundtrack and image. Director Sameer Kumar Madhar was brought on board the project shortly before principal photography via Shooting People, after a number of other directors had apparently stepped up and then backed off from the project. He has a - shall we say? - distinctive style.

Basically, what Madhar does is constantly cut between two different scenes one of which is silent leaving a continuous soundtrack of dialogue from the other. Which might have worked sparingly but is employed almost continually here. And it might have worked in instances when the two scenes take place simultaneously within the narrative, but Madhar likes to do this with scenes that take place consecutively within the narrative. Often featuring the same character. This adds enormously to the incoherence of the plot, although I’m sure it would be equally incomprehensible if it had been directed by somebody who wasn’t convinced that film direction needs a new paradigm and a crappy micro-budget horror/action picture shot in Nuneaton is the place to start.

There are no credits for production designer or costume designer which is fair enough because clearly nobody bothered to design the production or costumes. Despite several of the characters being police officers, none of that alleged £5,000 was spent on hiring a couple of police uniforms for a day from the local fancy dress shop to tog up a couple of extras and actually give the impression of police work. It’s very obvious that all the actors are simply wearing their own clothes (or not, in the case of the old sleeps-in-a-smile geezer). 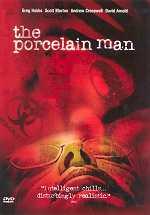 The mostly amateur cast includes nobody you’ve ever heard of and neither Bickley nor Kumar Madhar seem to have ever done anything else. Originally running 117 minutes, the running time was cut to 94 minutes by hacking out a lot of exposition at the start. “What was originally a 20 minute investigative segment (lots of mobile phones, edgy 24-style camerawork and creepy 'trust no-one' X-Files-type glances between leads), containing five chronological scenes now exists as one five minute sequence of cross-cut scenes that effectively explain the whole plot in one short swoop” reckons the press pack. Well, apart from the fact that the phrase is ‘fell swoop’, you dingdong, I can also certify that whatever this five-minute sequence might be, it only explains the plot to people who already know it.

The Porcelain Man (I’m still not sure what the title means) had a single cast and crew screening in July 2004 at Warwick Arts Centre and then was sold on DVD via the website (without certificate), presumably also to the cast and crew. There were a couple of reviews (from people who could evidently get their screener disc to play) before the movie and all associated with it lapsed back into justifiable obscurity. I can’t see a special edition of this one being released any time soon, sorry.