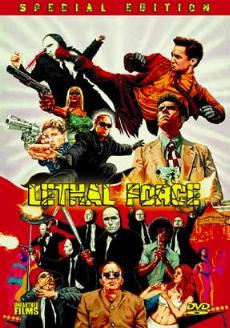 I approached Lethal Force with a completely open mind and before it was halfway through I was almost falling out of my chair with laughter. What I expected to be a low-budget martial arts actioner turns out to be one of the funniest action comedies I have watched for, ooh, ages.

Low budget comedy is very, very difficult to do and most of those who attempt it, especially when mixing it up with action and/or horror (there are copious quantities of fake blood on display here) go for the over-the-top route. But Lethal Force derives its humour from action, dialogue, characters and situations - in other words it’s a funny script, well directed.

The plot is wafer-thin. Writer/director/producer Alvin Ecarma stars as hitman Savitch (which I assumed was spelled ‘Savage’ until the end credits) under the screen name Cash Flagg Jr, an obvious homage to Ray Dennis Steckler. A rather amusing IMDB biography for ‘Cash Flagg Jr’ claims that his real name is Cassius Flagarsky and that his heritage is a mixture of Dutch, Nigerian, Hawaiian, Latvian and Scottish. He certainly has an international look to him which is impossible to put one’s finger on. If there is ever a big budget remake of Lethal Force, I expect Savitch to be played by Keanu Reeves.

Savitch had previously taken out local crime lord Mal Locke (Andrew Hewitt; John Malkovich would play him in the remake) but in fact Locke was only paralysed and now, confined to a wheelchair and surrounded by black-clad goons in white face-masks, he seeks revenge on Savitch. (No explanation is given for the goons all wearing masks but of course from a film-making point of view it means all you need are a few stuntmen who can be killed off time and time again.) 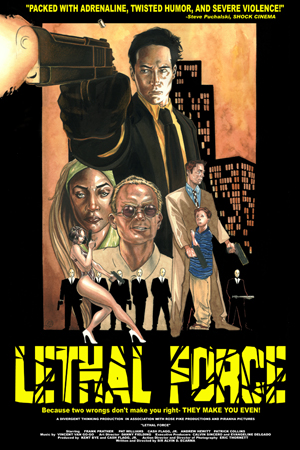 So Mal Locke blackmails Savitch’s friend Jack Carter (Frank Prather; Ben Stiller in the remake) into helping him catch Savitch by kidnapping Jack’s wife (Lori Boyd) and son (J Patrick Collins Jr). After seeing his wife murdered, Jack agrees to help trap Savitch in order to save his son. Assisting him in this deception is nightclub-owning lesbian gangster Big Bertha (Allison Jacobson; Rosie O’Donnell in the remake) who wears a suit and tie and the largest fez I have ever seen. Meanwhile Patrick is befriended and defended by Mal Locke’s moll, a tall black woman with long blonde hair named Rita (Patricia Williams; Angela Bassett in the remake).

There are a few other peripheral characters including the obligatory tall, black dude with an enormous afro and a balding, shades-wearing character named Psycho Bowtie (Eric Thornett), dressed all in black apart from his red dickie-bow. I don’t know whose side he’s on but he’s involved in a couple of cool fights and it’s very much like watching a kung fu Elvis Costello. Mention must also be made of Jen Dunkelberger as Suzy, an aspiring lapdancer at Bertha’s club whose method of fighting is to pause every so often to remove another item of clothing. She will be played in the remake by Jen Dunkelberger.

The fights are actually really well choreographed and shot, much better than most British martial arts indies, it must be said. There’s a touch of humour to them which you find in the best Hong Kong fights but is usually missing from the oh-so-serious kickboxing features that this country produces.

Ecarma cleverly picks some remarkable locations for his talkier scenes including an extraordinary statue of a giant buried under the ground. And Danny Fielding provides some excellent special effects involving knives through hands and power drills through heads. Possibly the funniest thing of all, in a movie which is packed with laugh-out-loud comedy, is the homoerotic relationship between Savitch and Jack which manages to be both subtle and desperately unsubtle at the same time. There’s a wonderful flashback to the two of them in 'Nam (or wherever), blasting away at stock footage of people being blown up.

I had an absolute ball watching Lethal Force, and then even more fun with the extras. There’s no Making Of but there is a hefty gallery of behind-the-scenes photos and a hilarious gallery of fake action figures, plus a selection of the director’s short films. The downside, if there was one, was that the whole movie was post-synched and this gave it an air of unreality sometimes - but after I realised quite how silly it was all meant to be and how carefully crafted it was (including colour-drenched cinematography courtesy of Declan McManus lookalike Eric Thornett), I stopped worrying and just enjoyed a terrific film.

(The DVD includes three very short (less than five minutes each) films by Ecarma. Me! (2K3 Remix) is Ecarma miming to the narration on an OTT trailer for blaxploitation hoopla Ghetto Freaks; A Conversation is an interesting contrast between a peacenik busker and a superhero on the rights and wrongs of violence; and My Dog has a Cyst wouldn't play on my copy.)