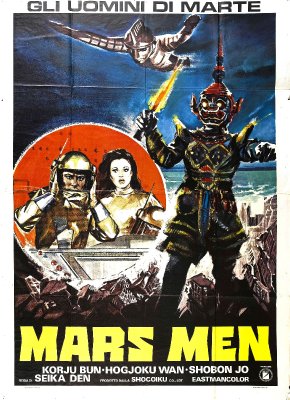 Here’s what I can discern from this, with the aid of Damon Foster’s indispensable and sorely missed Oriental Cinema magazine and the also-now-defunct Ultraman 2000 fansite. Gli Uomini di Marte is the Italian dub (and apparently, to some extent, re-edit) of a Thai/Japanese co-production called Yak Wat Jang wu Jumborg A in Thailand and Janborg A tai Giant in Japan.

This is the feature film spin-off from a 1973 TV series, Jumborg Ace/Janborg A, which was a Thai attempt to make a show like Ultraman, using the effects expertise of the Tsuburaya Company, who of course made Ultraman in the first place. Eiji Tsuburaya’s Thai protege was called Somport Sangdaunchay or Sompot Saengduenchai. Jumborg Ace (‘jumborg’ = ‘jumbo cyborg’!) looks very like Ultraman, but can produce a sword from a slot in his chest. He is created from a light aircraft piloted by someone who, well, isn’t actually shown in this movie, using a magic stone set in a wristwatch. Intriguingly, the Italian dubbed dialogue refers to the giant robot as ‘il gigante roboto Americano’... 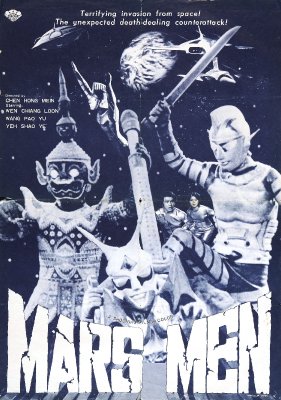 So here is my attempt to make sense of an nth generation copy of an Italian dubbed video of a bad print of a Japanese/Thai film. We open on some kids playing baseball near an ancient Thai temple; one little kid (called Lin) goes looking for the ball, finds a hidden cave, and unearths a small statue, about a foot high. This is a typical Thai demon - scary face, pointy hat, long frock coat, etc. - called Yak Wat Jang (first seen in the bizarre fantasy Tah Tien).

Meanwhile, Lin’s father is watching TV when the broadcast is interrupted by a Martian spaceship announcing that it is planning to conquer the universe - starting presumably with Earth. Lin runs in and shows his dad the statue, which the old chap identifies as being 3,000 years old (according to my rudimentary knowledge of Italian, self-taught from horror movie titles!).

A young lady (Lin’s sister?) comes home and finds both the old guy and the kid on the floor. They are rushed to hospital where it is discovered that their skin has turned to metal (I think!). Neither is ever seen again, so presumably they’re actually dead! The young lady is Nipha, wife of Dr Suriya - both are members of a super-high-tech Earth defence force called the Protective Attack Team (PAT) and race to their secret base in an old temple, where they wear gold space-suits.

Although there are a bunch of Martians on the flying saucer which is menacing Earth, the only two we see do anything are the leader, who has a mane of golden hair and is (I believe) called Jump Killer in the original, and his pointy, more cowardly lieutenant named Antigone. The two ‘beam down’ to Earth, where they turn out to be giants, and destroy some buildings. It must be said, the miniatures aren’t bad and the effects shots of the flying saucer passing over cities are nicely matted.

In the cave where Lin found the statue, Antigoné finds a magical stone, the solar eclipse diamond, seen by Dr Suriya and Nipha. (The Ultraman 2000 site said that this happens at the start of the movie, which leads me to think the Italians re-edited the film; also some sources give the length as 100 minutes, when this version is a bit under 90 minutes.) 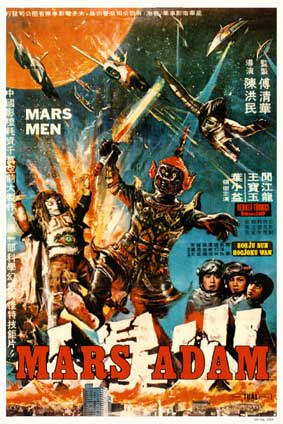 The Martians use the diamond to set up a giant heat-beam weapon on the Moon, with which they blast cities on Earth. Who can defeat them? Well, il gigante roboto Americano (Jumborg Ace to his friends) for one - who is introduced with no explanation whatsoever. At the same time, Dr Suriya and Nipha check Lin’s father’s house with a geiger counter and discover the small (radioactive) statue, which they take back to their base and blast with X-rays. When they look at it again later, it has tripled in size and shows signs of movement. As they watch, it leaps off the table, flies out the conveniently open door and heads off up to the Moon, growing to giant size as it does so.

The last half-hour is basically a series of fights between the four giant characters: Jumborg Ace, Yak Wat Jang, Antigone and Jump Killer. Initially the two good guys make the mistake of fighting each other, but later join forces to grapple the Martians. Yak Wat Jang has a sort of magic staff, while Jump Killer has an eye in his waist which blasts a heat-beam, and can also fire bullets from his torso. It’s cracking stuff, it really is! At one point, Jump Killer calls forth two rubber monsters (one of which has a gauze patch in the neck - for the actor to see and breathe - which is painfully obvious even on this fuzzy copy). When Yak Wat Jang destroys these two, the suits actually explode! Fantastic! Eventually, the Martians are defeated, Yak Wat Jang and Jumborg Ace thank each other and return to their respective parts of Earth.

This is a rollicking good piece of fun, with the Thai designs giving a whole new look to the normal Japanese giant hero genre. It’s difficult to read the credits on the small jpegs of Italian posters that I have found but they clearly don’t correspond with the ones on the print: the director is given as ‘Seika Den’ but that’s not a name you’ll find on any other film. It is also interesting how the title Mars Men is prominently displayed on the Italian posters to give the impression that this is an American picture, even though it has never even been dubbed into English, let alone released in the USA.

The French version, Les Hommes d'une Autre Planete, credits Ho Li Weper as producer and lists the cast as Yen Chiang Lung, Wang Pao Yu, Yen Tsiao, Fang Yen, Yan Fran Sua and Ro Gei. Allegedly this film was released in Thailand but not Japan. I don't know about that but it's worth noting that the Turkish(!) poster seems to be a merely a Chinese poster with the title Mars Adam printed over the top.

Fans of Ultraman, Godzilla and pals will love this and should watch out for two similar subsequent Thai/Japanese co-productions, Hanuman vs 7 Ultraman and Hanuman vs 5 Kamen Rider. However, beware of a Thai VCD which purports to be the original Yak Wat Jang Vs Jumborg Ace but is actually a hopelessly incomprehensible bodge of footage from this film and the Jumborg Ace TV series, together with some material about a new version of the PAT.