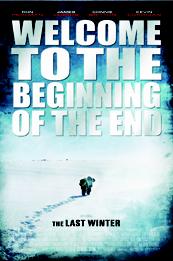 You know, it’s not often that a critic gets to watch the birth of a new subgenre. Usually these things only become evident in retrospect. But I think that The Last Winter is in the vanguard of a whole new type of horror picture.

Let’s be clear. I don’t mean the old nature-amok subgenre like Grizzly or Piranha where a particular species was selected to be fiercer and/or larger than it is normally and then just set free to rampage across the screen and most of the cast. No, eco-horror is a whole new subgenre that owes as much to An Inconvenient Truth as it does to Jaws or Phase IV.

The Last Winter may or may not be the first eco-horror film, but it’s the first one I have seen. And I would venture to suggest that, unless this particular subgenre turns out to be absolutely fantastic through and through, this will ultimately be regarded as one of the best eco-horror films. Larry Fessenden’s latest film sets the bar very high indeed.

An opening corporate video explains that an attempt to drill an oil well in an Alaskan wildlife reserve many years ago was abandoned, but that now North Oil are back for another try. A small group of men and women are already out in the snowy wilderness, measuring and marking out the area before an ‘ice road’ is constructed to the location. They’re shacked up in a collection of Portakabins and their only link to the outside world is a radio telephone and occasional visits from a light aircraft, which drops off team leader Pollack after he has spent five weeks back at company headquarters. 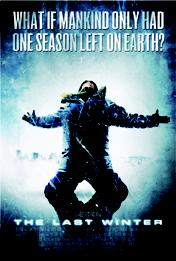 Pollack is played by the world’s busiest actor, Ron Perlman, who is just in everything. I mean, the Inaccurate Movie Database already lists 21 other credits since this! To be fair, that includes four animated Hellboy features, an animated Conan feature, a Hellboy video game etc but still there’s things like Hellboy 2 and Mutant Chronicles (he was on set when I visited but wasn’t in the mood for interviews alas). I mean: Star Trek: Nemesis, Blade II, Scooby-Doo, Batman, Titan AE, The Outer Limits, I Woke Up Early the Day I Died, City of Lost Children. It’s hard to find something cool this guy hasn’t done in some respect. Hmm, didn’t know he was in Police Academy 7, I must admit...

In opposition to Pollack is Hoffman (James LeGros: Phantasm II, Destiny Turns on the Radio), one of two ecologists or ‘greenies’ which North are required to have on site, monitoring the environmental impact of the work. So immediately there’s conflict - conflict which is not helped by Pollack’s discovery that, while he was back at North HQ, Hoffman has not only joined the team he has also hitched up with Abby (Connie Britton: Spin City, plus recurring roles on The West Wing and 24), a female worker who had previously been keeping Pollack warm at night.

This is conflict which builds. Initially Pollack is welcoming, if naturally wary, and everyone joins in a ‘welcome back’ meal and a game of American football outside on the ice. Pollack is a company man and it would have been very easy to paint him as a bastard, a sort of blue-collar Paul-Reiser-in-Aliens, but he has an agenda based on his own values, his own belief that the fuel reserves as yet untapped in Alaska will make the world a better place, not a worse one.

The rest of the team are interesting but not caricatures and we get to know them slowly over the next 50 minutes or so.

Because it is only halfway through this 101-minute film that anything really scary happens, and then only very, very briefly. That might sound like a long build-up but that’s just what it is: a build-up. The feeling that something is awry up there in the snow increases gradually. The vast expanses can do strange things to a person’s mind; you can see illusions, you can start to feel a little strange. 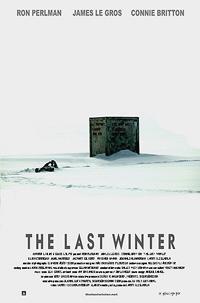 Odd winds from nowhere, curious feelings, half-seen images - there’s nothing overtly supernatural. In fact everything that happens seems to be natural and perhaps that’s part of the film’s great strength. Because this isn’t a monster movie. The monster, if there is one, is nature itself. Not animals - we never see any animals except a few crows - but the world, the snow, the planet, the ice, the cold air and the Northern Lights. And if it is a monster, it’s Frankenstein’s monster, not in the sense of being man-made but in its pitiful, victimised defence of itself. It’s a monster that can be pushed so far and then must lash out at its attackers.

Describing too much of the plot would spoil a film that I really, really don’t want to spoil for you. But I can say that from the halfway mark, things start to get worse for the team and people start dying. And things get worse and worse and they have so much empty space around them they have nowhere to go. Simmering at the heart of this is the antipathetic relationship between Pollack and Hoffman which never boils over into rage. Towards the end, the two must work together and it would have been easy for the film to fall into a simplistic storyline about people learning to understand other folks’ views - but this never happens. Fessenden’s marvellous script and direction ensures that these characters stay three-dimensional and their relationships remain believable.

The Last Winter is a sort of edgewhere movie, balanced on that precarious border between reality and fantasy. There are parts of the film where it’s clear that what is happening is inside somebody’s head - psychological horror. There are other parts where it seem reasonably clear that some genuine physical phenomenon has occurred, one that should not have done so - supernatural horror. These two elements both contradict and complement each other and a third element is present too: scientific horror. As Hoffman tries to understand why the permafrost is melting, why it’s warm enough in Alaska for rain, the horror of what humanity is doing to the planet - and what the planet may do back - becomes the ultimate driving force behind the film’s emotional push.

Fessenden’s last couple of films, Habit and Wendigo (someone mentions a Wendigo in this one) were written solo but for this script he has teamed up with Robert Leaver, a “New York based writer, poet and teacher” who has two short documentaries to his credit, The Session and Oil and Water (although these are not mention in The Last Winter’s publicity for some reason). Fessenden, whose acting credits include Session 9, The Roost and Cabin Fever 2, has a cameo in an aeroplane on its way to visit the base.

The frankly flawless cast also includes Kevin Corrigan (True Romance, Bad Boys), Jamie Harrold (Erin Brockovich, Kingdom Hospital), Zach Gilford (Rise: Blood Hunter) and Grammy-winning Native American singer-songwriter Joanne Shenandoah. But possibly the finest member of the cast is the location which is as much a character as New York in a Woody Allen movie. Full credit for this has to go to the stunning cinematography of G Magni Agustsson who works wonders with not just the vast, widescreen emptiness but also the lived-in confines of the base. 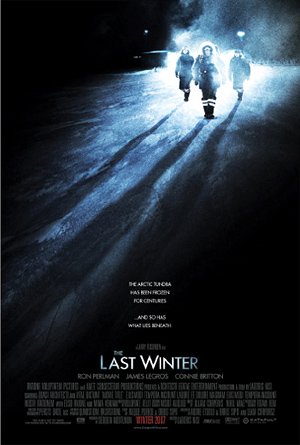 Agustsson is Icelandic and indeed much of the film was shot in Iceland. Variety actually lists the film as a US-Icelandic co-production and I’m prepared to go along with that unless proven otherwise. Producer Jeffrey Levy-Hinte also produced Wendigo as well as films like Laurel Canyon and Mysterious Skin. Executive producer Sigurjon Sighvatsson’s previous credits include Wild at Heart, In Bed with Madonna, Candyman I and II, Kalifornia, Lord of Illusions and Arlington Road. Stefan Jorgen, who contributed the make-up effects, also did make-up for Lazy Town! Glenn McQuaid provided the visual effects. Douglas Buck (Cutting Moments) shot a Making Of which is sadly missing from the vanilla UK release.

If you want scary monsters and/or gallons of blood and/or a roller-coaster ride then you’re looking at the wrong film. This may be Fessenden’s most accessible film to date but it’s still not obviously commercial (note the lack of attractive young people in the cast, for example). But if you want a powerful, unnerving, original, beautifully constructed slice of disturbing, thought-provoking eco-horror, here it is.