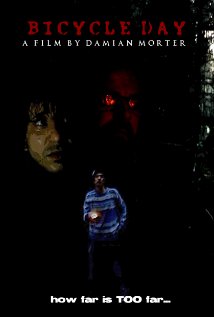 Now I did not know this but, according to online man-in-a-pub Wikipedia, the term ‘Bicycle Day’ refers to an event on 19th April 1943 when Albert Hoffman, inventor of LSD, deliberately took a dose to see what would happen. What happened of course was that he went completely off his gourd but during this trip he asked his assistants to take him home and, what with there being a war on and everything, they made the journey by bicycle.

In 1984, apparently, an Illinois Professor came up with the idea of commemorating Hoffman’s trip on an annual basis and apparently now some hippies celebrate an annual ‘Bicycle Day’. If they’re not too stoned to remember.

Bicycle Day the movie was the first feature from the husband and wife team of Damian and Nicola Morter, before they made The Eschatrilogy. It’s quite nasty but it’s a real horror film, not just a violent thriller, and it’s really not bad. And it’s about acid. 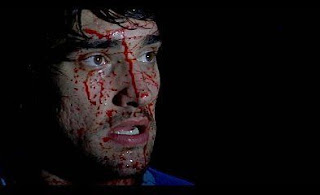 As well as writing, directing and editing, Damian Morter stars as Chris, who is off on a camping trip in the woods with his brother and two mates. A bit of male bonding, a bit of fishing, quite a lot of drinking, plenty of dirty jokes and mate-y joshing. Chris is a straightforward sort of working class bloke: loves his wife and kids, looks out for his mates. However his younger brother Paul (Paul Collin-Thomas, who played a zombie in a Resident Evil viral campaign) is something of a waster, a wannabe-gangsta layabout dope-head who has never held down a job or a relationship and harbours (when he’s not too stoned to remember) a resentment against Chris whom he perceives as having been their parents’ favourite - despite the many times that Chris has looked out for him.

Chris’ mate Jay (Jay Barnett) is a happy-go-lucky sort, up for a laugh, but his other mate Simon (Paul D Morrison) is more morose and serious. Something is bugging him, and he has never got on with cheeky twat Paul. This quartet of nicely drawn, well-acted characters head out in Jay’s car to an isolated spot, 30 miles by road from the nearest civilisation, to get pissed, eat burnt/undercooked bangers and potentially catch the odd bream if they can be bothered. 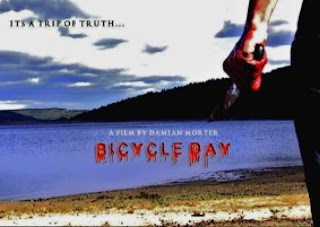 Well, that’s not going to happen because, on the first night, their drinks are spiked with acid - for reasons which rapidly become obvious - and the camping weekend becomes a bad trip in every sense.

Playing someone who is high on LSD can be quite a challenge if it is not to come off as wacky or stupid; directing such a scene is likewise problematic. Actor-Morter and his fellow cast members are therefore to be praised for presenting their unexpected bad trips as believable - and believably harrowing - experiences, with director-Morter using some simple but effective visual effects (a sort of double exposure) to represent the men’s distortion.

To say more would be to give too much away, except to say that there are some suitably gory and violent consequences. What really makes this film work, however, are the characters: a quartet of solid performances drawing on Morter’s impressive script. I’ll say it yet again: characters are defined by relationships. And each of these men has a clear and believable relationship towards each of the others. We believe in these characters and that lets us believe in the events shown, even when they start to get a little outlandish.

Without good characterisation, a story like this is just so much running around in the countryside and getting killed. God knows enough films have been made like that over the years. But Bicycle Day is a step up from those sort of bargain basement Straw Dogs/Blair Witch clones and I really enjoyed it. To be honest, I’m a bit mystified why this hasn’t yet been picked up for distribution when a lot of far worse films have. 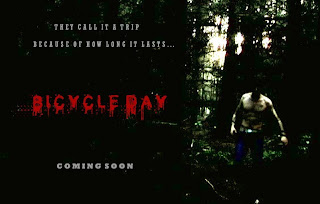 Shot in July/August 2010 (as Bad Trip) on a reported budget of £90 (Marc Price could make two films for that money!), Bicycle Day played the Sheffield Film Festival and Boston’s Killer Film Fest in late 2011 but is not yet available on DVD. Not unexpectedly, several of the cast and crew also worked on The Eschatrilogy.