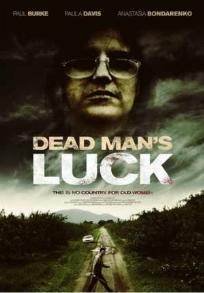 Sometimes it’s great to try a lucky dip, a film about which one knows absolutely nothing. I’ve had so many screeners stacking up in what I loosely call “the TBW pile” while finishing this book that I’ve lost track. I moved some papers on my desk - and there was a silver disc labelled Dead Man’s Luck.

Thing is: I don’t remember receiving this. I don’t recall seeing a sleeve or a press release. The title rings no bells with me. I can’t even tell from the screener which company sent it to me. But... I’m feeling lucky. Lucky as a dead man, maybe more so. I don’t know what this is about, or even what sort of film it is. Could be a slasher, a monster movie, a horror comedy. Could be American, Australian, foreign (I at least know it’s not British because I would recognise the title). I’m going to assume it’s about 90 minutes or so, pop it into the DVD player and see what unspools.

Well, that was a very pleasant surprise indeed. Dead Man’s Luck turns out to be a cracking rural thriller from 2006, originally titled The Ante (as in “upping...”). Paul Burke (Dead Lines) stars as Sam, an ordinary bloke who stops at a farm to ask directions and finds himself framed by the (never-named) farmer’s wife (Paula Davis, who was in a six-part anthology I totally need to see: Frankenstein Unlimited) for the murder of her husband. She has evidently been waiting for the right opportunity to come along - and Sam was simply the wrong guy in the wrong place at the right time.

The actual framing is done simply and believably and leaves Sam with blood on his shirt, his bloody fingerprints all over the farmhouse, the murder weapon in his car and the farmer’s wife screaming about murder and kidnap.

So many films are about idiots, or rather about people who do idiotic things for the sake of the plot. So it’s always a joy to watch a movie in which the protagonists make good choices. Sam’s solution is a stroke of genius: he removes the farmer’s body and cleans up the blood: without a body, there’s no murder case.

Then the story ‘ups the ante’ as we meet Sam’s bored, conniving Russian trophy wife Jan (Anastasia Bondarenko) who realises that they have an advantage over the farmer’s wife. She wants the body, not so much to frame Sam but more for insurance purposes, but only Jan and Sam know where it is. Thus begins a brilliant sequence of back and forth manoeuvres which could have been blackly comic - let’s face it, this is hardly the first film with a corpse as the McGuffin - but here are played thrillingly straight. 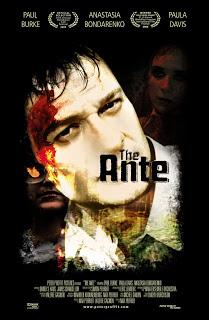 Adding to the complexity is the antipathy between Jan and Sam, creating a magnificent triangle of distrust and deceit. And I won’t describe any more for fear of spoiling what is an enormously enjoyable - and clearly unjustifiably obscure - film.

This seems to be the only film by Canadian director Max Perrier, the script written by two other fellas from a story by the director’s brother Simon. Cinematographer Maarten Kroonenburg got an early credit back in 1986 as ‘camera trainee’ on Canuck Robocop rip-off The Vindicator and then did various camera crew jobs on the likes of Highlander 3, Witchboard 3, Sci-Fighters, Habitat, Laserhawk and, um, Barney’s Great Adventure.

It transpires that Dead Man’s Luck has just (October 2012) been released in the UK by Left Films, so that’s who sent me the disc. And I’m jolly glad that they did. Intelligent, well-made and gripping, Dead Man’s Luck is wholeheartedly recommended.

Email ThisBlogThis!Share to TwitterShare to FacebookShare to Pinterest
Labels: 2006, Canada