Simon Carr, Visual Effects Supervisor on Mutant Chronicles, was one of the people I interviewed during my day at Shepperton Studios in June 2006.

What does the role of Visual Effects Supervisor involve on this movie?
"On the shoot I just try to make sure we shoot all the plates necessary, so that the comp works and we get all the shots we need. I need to take measurements of sets and photographs of the environment so we can make them in 3D if necessary. In pre-production, it was working with Caroline Greville-Morris the production designer and Simon Hunter, just to work out the best way of doing things. How much is real and how much is virtual? What do we need to be real? Then in post it’s a question of trying to maintain the consistency through all of these thousands of shots, just trying to keep a tab on them."

Is there an effect in every shot here?
"No, although it feels like it at times. There are scenes. There’s a scene inside a transporter which was an enclosed set so most of the shots in that are actually practical shots. There are a number of scenes which are mainly practical but then there are scenes which are almost entirely green-screen and then we’re either comping them into miniatures or into computer graphic models, so it’s a combination. There are a lot of effects shots for this but it’s not all effects." 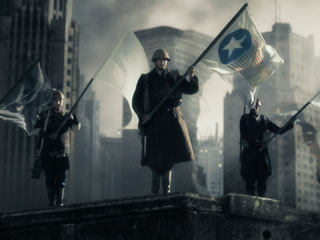 What attracted you to working on Mutant Chronicles?
"Actually the first script that I read was a great script. I’ve read a lot of these sort of scripts and fallen asleep. This one was very coherent and it was fun. So that was the first thing. Then when I realised the scale of what they wanted to do, and I’ve not really had an opportunity to do that before so it was just great. And it was sci-fi, it’s what VFX supervisors live for, but which doesn’t come along too often. That was the biggest thing."


Did you work on the seven-minute ‘teaser’ film that Simon made?
"No, I think Simon did a lot of that himself, and a couple of his friends. I’ve seen it and it was actually really helpful to watch that because it gave a feel for what he was trying to achieve which was much easier than trying to explain it."

You have got an enormous post-production period, a bit more than you’re used to.
"Yes, although on big shows that does tend to be quite long anyway. In this case, it’s going to be a case of trying to maintain your energy for twelve months. But I think it should be fine because the sequences themselves are so distinct. I think that what we’ll probably aim to do is take a sequence at a time and address that so we don’t overwhelm ourselves by trying to deal with the whole film at any one time. We’ll just deal with distinct bits."

Does it make your job easier because it’s all being shot on digital?
"The obvious thing that it cuts out is any need to dustbust. You end up with an awful lot more footage because on film you shoot the film, it gets cut and then you DI what’s necessary so you only ever scan the necessary material. With this, we’ve got every frame shot on the film. But on the other hand it means we’ve got access to film resolution imagery from day one. So we’re not having to work on video-res material for mock-ups or anything else. Everything can be film-res and we can know immediately if the keys work so from that point of view it’s fantastic. But mainly it’s the dustbusting!”