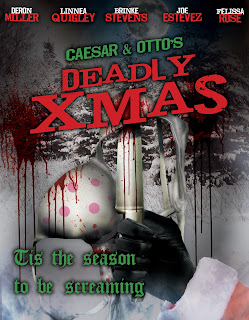 Three years after their Summer Camp Massacre, half-brothers Caesar and Otto Denovio are back in their third feature, Caesar and Otto’s Deadly Xmas. It’s actually their fifth film as there have been a couple of shorts in the meantime: C&O in the House of Dracula and C&O Meet Dracula’s Lawyer. (The duo also pop up in Dave Campfield’s recent political satire short The Perfect Candidate.)

By now Campfield and Paul Chomicki have their double act down pat and it is a joy to behold. Caesar and Otto are a wonderful pairing. Like Stan and Ollie, like Eric and Ernie, like Albert and Harold, like Jay and Silent Bob - they are effectively married to each other. They can’t stand each other but they know deep down, even if they won’t admit it, that they need each other and they’re stronger together.

Otto is sweetly pathetic. He’s a slob, but an innocent slob. He just wants a little peace, a little happiness and warmth. In this tale he’s tracking down a girl he had a crush on in high school (multi-divorced Allison, played by the unfeasibly cute Summer Ferguson). It’s difficult not to love Otto, especially given what he puts up with from Caesar. 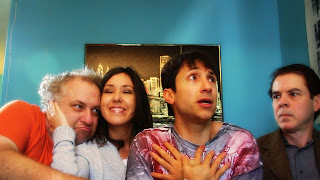 Caesar has a different kind of pathos. Hyperactive, insecure, egotistic - and paranoid if he isn’t the centre of attention. Caesar is the epitome of that thing we call ‘an actor’. But we can tell that he has a good heart, that he does in fact love his half-brother and that his tantrums and bitchy comments are really all a show, disguising the vulnerable, lonely man inside.

There are depths to these two characters which make us want to spend time with them: ninety minutes every three years just isn’t enough.

The surprisingly complex plot of Deadly Xmas involves a Satanic cult founded in California in the late 19th century, plus Caesar’s latent fear of Santa Claus (or anyone dressed as him). Also the burgeoning Otto-Allison romance, their father’s usual nefarious shenanigans, a squeaky-clean company expanding into slasher movie production and of course a serial killer. A smart script and pinpoint direction careen through the story taking no prisoners, with lots of knowing winks and nods to the B-movie-ness of it all. 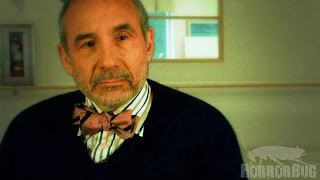 Not least of these is a star-packed cast which makes this the It’s a Mad, Mad, Mad, Mad World of second-tier Hollywood. Debbie Rochon! Brinke Stevens! Linnea Quigley! Felissa Rose! Joe Estevez! Robert Z-Dar! And of course, dear old Uncle Lloyd! A quick check on the IMDB reveals that between them these seven fine folk have an incredible 1,100 credits, and even if we allow for duplication in that list there must be about a thousand films with one or other of them in the cast. This is the bedrock of low-budget independent cinema right here folks, step up and take a seat.

But all of this would be so much self-indulgent nonsense if it wasn’t for one crucial fact. Caesar and Otto’s Deadly Xmas is howlingly, gutbustingly funny. Every gag hits the mark, every comic turn, every pause, every double-take, every slapstick, everything. Comedy gold, that’s what this is. Comedy gold.

Also in the cast are: Shawn C Phillips, who has amassed more than 60 IMDB credits himself by appearing in stuff with titles like Sasquatch Assault, Zombie Babies, Kung Fu and Titties, Girls Gone Dead and Fat Planet; Victoria Vertuga, who made another seasonal horror feature the same year, something called Merry F@#$ing Christmas; Aaron Miller, who played ‘Manson victim’ in Dahmer vs Gacy(!); Paul Guay, who wrote Jim Carrey vehicle Liar Liar but, more significantly, was in Don Glut’s Countess Dracula’s Orgy of Blood; Keith Bush, who played Orson Welles on TV a few years back; and Ken MacFarlane, who was in a 2004 Golem movie. Plus producer Robin Ritter and producer/designer/FX guy Richard Calderon. 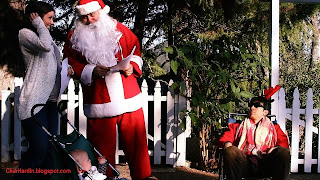 I loved, loved, loved Caesar and Otto’s Deadly Xmas. It’s clever, it’s knowing, it’s silly, above all it’s joyous. The subgenre of Christmas horror B-movies is not a distinguished one, populated by such crap as Psycho Santa and Satan Claus, but the half-brothers Denovio are the boys to put the sparkle back into festive frights. It doesn’t matter what month it is right now - this is great at any time of the year.