Cyborg Cop is one of the all-time great straight to video action flicks. Bradley and Jensen (who I once met on the set of Breeders) are brothers - and DEA partners - Philip and Jack Ryan (no, not that Jack Ryan). When Jack shoots dead the son of a newspaper baron in a hostage situation, he’s pilloried in the press and forced to retire. Then his brother disappears in a botched raid on a drug baron’s Caribbean operation and so Jack goes in to look for him.

Turns out that drug king Kessel (Sliders’ Rhys-Davies, with a bizarre accent that sounds like Daphne’s in Frasier!) is using his profits to develop cyborgs. He already has one prototype (hulking Rufus Swart from the delirious Space Mutiny) which he plans to sell to a revolutionary plot to bring down the country’s President, and is converting Philip into the next version.

Jack teams up with spunky reporter Cathy (Shaw), comes into conflict with the island’s bent cops, and eventually faces off against Kessel having killed enormous numbers of his local goons. Philip, still unfinished according to mad, German-accented scientist Dr Stechman (Robert Whitehead) recognises his brother and fights with, instead of against him. 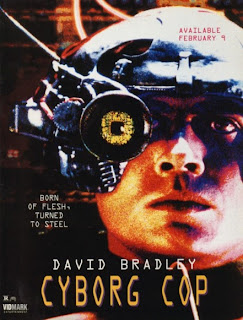 Unfortunately, despite plenty of gunfire, explosions, punches and kicks, the long-awaited cyborg-vs-cyborg denouement is frustratingly brief and unexciting. But Cyborg Cop is nevertheless great fun for anyone looking for mindless sci-fi action. Production values - including some effects by Steve Painter - are on the whole good, direction is slick, and the script (by actor Greg Latter) is well-written, especially the early confrontational scenes between Jack and Cathy. The ever-reliable Rhys-Davies carries his rather eccentric role off with aplomb, providing a few laughs and even a hint of a gay subtext!

Despite the title, this has no connection with, or aspirations to be, RoboCop: that was a cop, although he wasn’t a robot, he was a cyborg; this is a cyborg but he’s an ex-cop! Cyborg Cop is a very enjoyable way to pass 93 minutes, definitely a cut above most SF action flicks, without straying from the enjoyable cheesy elements that characterise the genre.

In accordance with tradition, the blurb on the video sleeve bears little resemblance to the actual plot and also manages to spell Alonna Shaw’s name wrong. Bradley returned as Jack Ryan in Cyborg Cop II.

MJS rating: B+
review originally posted before November 2004
Posted by MJ Simpson at 20:32