Don Coscarelli, director of the four-part Phantasm series, graciously granted me an e-mail interview in August 1999. This has never been published.

Where did the original idea for Phantasm come from?
“There were several influences which factored into why I created Phantasm. I was a rabid fan of sci-fi and horror from about age five. When I previewed my second film, Kenny and Co., one of the sequences had the characters in a haunted house and when a monster jumped out, the audience screamed. I loved this response and vowed to do a film loaded with shocks. I was always fascinated by the way death is handled in America. I find it strange and horrifying how the corpse is spirited away by a mysterious undertaker to... just what? Also, my first two films had been well received by critics but hadn't exactly set the box-office on fire. I had heard that the horror genre was always commercial. Those were the basic reasons I set out on the road to make Phantasm.”

What were the reasons for choosing your principal cast? How would the saga have continued if Michael Baldwin, Reggie Bannister or Angus Scrimm had been unavailable?
“We were working on a very low budget, so I decided to cast as many roles as possible with actors I had worked with before. Not only because, as friends, they would work for cheap, but also because I knew these actors well and was intrigued by crafting roles just for them. Mike had starred in Kenny and Co.. Angus had starred in my first film, Jim the World's Greatest. Reggie had appeared in both. I am not sure if the saga would have continued without any of them. I believe that the success of the franchise derives from the appeal the Phantasm cast has with the fans.” 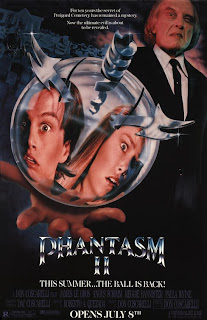 Why was there such a lengthy gap between Phantasm and Phantasm II? What inspired each of the sequels?
“I had other films I wanted to make, and I did not have a clue as to how to write a sequel to Phantasm. It took me several years to get the funding for The Beastmaster, and I also shot the first half of my adventure film Survival Quest during this period. Though it seems pretty obvious today, one day it hit me that I should just start Phantasm II the moment Phantasm ended. I suddenly ‘got it’ and was able to quickly write the screenplay.”

How has the concept developed over the four films, from your point of view? Have you ever considered it as a series, or do you just take each sequel on its own?
“I think that the cast and I have, over time, consciously or not, created a sort of unifying theory of the world of Phantasm. We have a sense of what works in this world and what does not. However, there really has never been an overall scheme as to the plot. When it's time to start a sequel, I work up an idea, a story, then sit down with the cast and we talk it over. They each see the Phantasm world from the perspective of their own characters and can be quite forceful in their opinions. Imagine trying to tell Angus Scrimm what to do when he insists that the Tall Man would never do that! It is also very difficult because we never know when we are making a sequel if it will be the last one or not.”

What differences have you encountered between the four productions, especially in terms of making Phantasm independently, Phantasm II for Universal, Phantasm III for MCA video and Phantasm IV independently again?
“Each has been very different. Phantasm was a terror and a joy. We were really entering the unknown when we made that film. We had no idea it would turn out as successfully as it did. In the process we had some amazing experiences and made lasting friendships. On Phantasm II we were lavished with, for us, a luxurious $3 million budget. We were able to do some great action and effects and build a very cool mausoleum! The downside was that Universal did not let Michael Baldwin join us on that adventure and they completely mishandled the distribution of the film.

“Phantasm III was funded by Universal's home video arm so we had more freedom, but less money, about half what we made Phantasm II for. Michael Baldwin was back and our original cast was reunited. We tried some things and brought in some new cast members. We also filmed the most hellacious stunt of the series, Bob Ivy's awesome hearse crash stunt. Phantasm IV was really a return to our roots. We didn't have much money, but we went back to the basics, kept it simple and sinister. Since there was not much pressure from the investors, I was able to make a film for myself and the fans.”

What were the origins of Beastmaster, and why have you not been attached to the sequels? Are you connected in any way with the TV series? (And what is the difference between the ‘Uncut version’ in my local HMV Store and the normal version?)
“Along with my interest in horror as a youth, I also watched the Steve Reeves ‘sand and sandal’ epics, along with the Ray Harryhausen films. The Beastmaster was an outgrowth of that interest. I have not been involved in any of the sequels or the new television series. (I don't know anything about different versions of the film).”

Finally, will there be a Phantasm V, and if not what will you do instead?
“One never knows. Roger Avary, the winner of the Academy Award for co-writing Pulp Fiction, has written an amazing, epic Phantasm sequel screenplay. We just may get that made soon if we can find a film distributor with ‘vision’. Otherwise, I have several other projects in development including one written by author Joe R Lansdale, who I think is brilliant. And Jamie Blanks - the young director of Urban Legend - and I are looking for a project to team up on!”