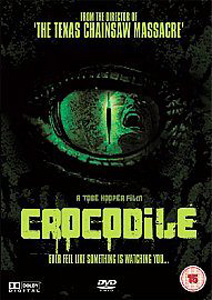 Although Nu Image’s range of one-word-will-do, nature-amok creature features might seem to be much of a muchness, they do vary enormously, and this one immediately stands out by virtue of its name director and it effects credit for the KNB FX group. And while many critics regard this as Tobe Hooper ‘slumming it’ at the bottom end of the production pile, the truth of the matter is that this is a taut and scary horror thriller with rounded characters and a suspenseful storyline. Who will survive - to quote the poster for one of Hooper’s slightly better-known movies - and what will become of them?

Okay, fair enough. They’ll be gobbled up by a bloody great crocodile. But still: who will survive?

Let’s meet the team: eight kids enjoying Spring Break by spending five days on a houseboat on Lake Sobek. There’s Brady Turner (Mark McLauchlin aka Mark McLachlan: Blood Feast 2) and his irresponsible, joke-playing friend Duncan McKay (former USC student Chris Solari) who has red streaks in his hair and who once got Brady expelled from High School. Then there’s Brady’s long-time sweetheart, sensible Claire (Caitlin Martin) but also multi-coloured-hair bimbo Sunny (Sommer Knight) who has a crush on Brady that was once secretly fulfilled. 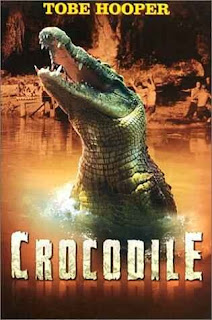 Goatee-wearing, relatively sensible Kit (Doug Reiser) is the one whose family own the houseboat, while his short-haired girlfriend Annabelle (Julie Mintz) has brought her poodle Princess along with her from New York. Rounding out the octet are shaven-headed party animal Foster (Rhett Jordan: Voodoo Academy) and skinny goof Hubs (Greg Wayne).

After a run-in with the local sheriff (veteran actor Harrison Young), the boisterous but ultimately good kids set off up the lake and find a mooring spot to spend time partying. What they don’t know is that a couple of drunken anglers have destroyed a nearby ground-nest of large eggs, incurring the bloody and fatal wrath of something unseen.

Hooper knows how to scare us and our first few sightings of the massive title beast are short, sharp and out of nowhere, effectively combining a ‘cat scare’ with the lingering shock of a violent and terrifying attack. Later we see close-ups of an eye or a tail - excellent work from KNB which really emphasises how important a realistic monster is to something like this. In later long shots we get a CGI croc which - while it’s not quite on a par with the beast in Lake Placid - is nevertheless impressive for a film of this scale.

With one of their number having disappeared (we know where - they don’t) the seven remaining youngsters wake from a night of serious drinking to find their houseboat has drifted to another part of the lake and become stuck. Attempts to refloat it come to naught and eventually the titular beast puts in an appearance. It’s a big fellow (actually, given the eggs, a big gal) and soundly trashes the houseboat, leaving the gradually diminishing party to make their way back to civilisation along the lake shore. 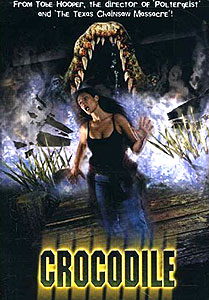 The explanation of how and why this croc is there has at least had some thought put into it: this is ‘Flat Dog’, a 100+-year-old Nile crocodile which was originally an exhibit at the now derelict Nile Hotel. She is now mad because her eggs have been smashed. Sheriff Bowman suspects that his quarry may have escaped from ‘Shurkin’s Gator Farm’ but redneck gator farmer Shurkin (Terrence Evans: Curse II, Phantom of the Mall, Terminator 2, The Pumpkin Karver, Texas Chainsaw Massacre remake - curiously credited as ‘T Evans’ in the end credits but with his full name in the opening titles) graphically shows the difference in size between gator eggs and croc eggs.

Shurkin is out to get Flat Dog, who killed first his grandfather and later his father. Ironically he could just have asked his inbred assistant Lester (screenwriter Adam Gierasch as ‘Adam Redmond’) who - in a subplot which goes preciely nowhere, suggesting that it was a last-minute steal from Lake Placid - has actually been feeding Flat Dog, possibly because he hates his boss so much.

To go into any more detail about who becomes croc-feed and in what order would be to spoil what is a surprisingly enjoyable and above-par B-movie.

Standing out among the cast, most of whom have few if any screen credits but all of whom are talented actors, is the vastly experienced Harrison Young as Sheriff Bowman. Michigan born and army-trained, he only started acting when he was 38 but since then his career has included roles in Taxi Driver, Waxwork II, Children of the Corn IV, Saving Private Ryan (as the old Private Ryan), The Opposite of Sex, The Adventures of Rocky and Bullwinkle, Bubba Ho-Tep, House of a Thousand Corpses - and even Yonggary! - as well as episodes of Buffy, Sabrina and Sliders. Also in the cast are stand-up comic Kip Addotta (Watchers II is his other horror credit), assistant props master R Vern Crofoot and ‘Crystal Atkins’ as ’blonde bikini girl’ despite the fact that not one single blonde in a bikini is seen anywhere in the entire film. 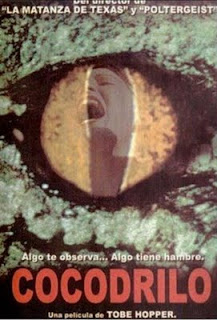 Shooting second unit work on this film led to Sam Firstenberg (Cyborg Cop, Cyborg Cop 2) being asked to direct Spiders 2 for Nu Image. Composer Serge Colbert also wrote scores for that film plus Shark Attack, Shark Zone and four of the five Operation Delta Force movies. Cinematographer Eliot Rockett photographed The Specials, Nightstalker and A Gun for Jennifer. This was editor Alain Jacubowicz’s fourth film for Hooper, following Texas Chainsaw Massacre 2, Night Terrors and Invaders from Mars. Production designer W Brooke Wheeler worked on Jason Goes to Hell: The Final Friday, Silent Night Deadly Night 5 and Project: Metalbeast - am I the only one who finds resumes like these impressive and interesting?

If you only want to buy one Nu Image film, this is probably the one to get, but as you can often buy seven or eight of them for the price of a normal movie, you may want to invest in some of the others too.

MJS rating: A-
review originally posted before November 2004
Posted by MJ Simpson at 21:12