Here’s a little treat from my files. Back in October 1999 I got in contact with Sean S Cunningham about the House films, an unconnected series I’ve always had a liking for. I think House IV was being released at this time and this was probably done for a piece in SFX. Anyway, Mr Cunningham very kindly answered a handful of questions that I e-mailed him via his personal assistant. 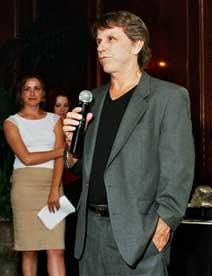 With the original House, why did you concentrate on fantasy - and quite comic fantasy at that - after the more realistic horrors of Friday the 13th, Last House on the Left etc?
“It was a fun and original idea. It had never been done before, mixing comedy and horror. So we went for it.”

Why did you decide to make House 2 as a sequel which apparently had no connection with the original?
“Ethan Wiley, the writer of House, felt it was the best way to go.”

Having established that the House films were an anthology series, why was William Katt as Roger Cobb brought back for Part 4?
“Writer-director Lewis Abernathy thought it would anchor the story line.”

Having created the Friday the 13th franchise, and then apparently had no connection with the first seven(!) sequels, why did you return to it with Part 9?
“The idea of doing Freddy vs Jason after Part 9.”

The $64 million question: what is the current state of play with Freddy vs Jason and Jason X?
“New Line has expressed their commitment to do both movies but there is no set ‘go’ date for either film. Jason X takes the Friday the 13th series to a new level. The script is fresh, original and unlike any Jason move you've ever seen. Get ready for a kick-ass movie. You’re gonna love it. Freddy vs Jason - David S Goyer (Dark City, Blade) has been asked to provide his obviously awesome creative talents to the script. We are very enthused to have Mr Goyer on board. We expect his draft soon.”