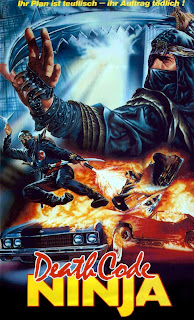 This movie was one of several apparently cobbled together by Tommy Cheng (sometimes spelled Cheung) and Tomas Tang in the late 1980s, including Ninja Death Squad, Ninja in Action, Ninja: American Warrior and Another Load of Old Crap with the Word Ninja in the Title.

Basically, what you have here is an unidentified Hong Kong action thriller from the late 1970s, topped and tailed with some piss-poor, unconnected ‘ninja sequences’ shot in HK several years later. The plot concerns a young married couple - hitman and hitwoman - known as ‘the Killer Couple’ who want to retire but find themselves mixed up in an affair centring around an incriminating list of mob bosses. When the husband is killed, the wife seeks revenge, hindered by the local cops.

It’s an okay HK crime movie with a certain amount of kung fu and some nifty swordwork. An early scene shows two mob bosses falling out over a deal involving a ‘strategic Star Wars map’, something which the video sleeve synopsis claims is central to the whole plot. As one boss makes his getaway, his car is attacked by black-clothed ninjas, who are in turn attacked by a white-garbed ninja, clearly played by a white guy. He eventually fools them by hurling his costume over a cliff while hiding, showing that ninjas wear boxers! 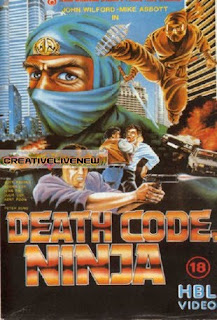 A sequence in the middle of the film has four KGB goons killed off by another white guy dressed as a ninja, in this case swathed in yellow. At least some attempt has been made to integrate this and the earlier sequence into the film, however hamfistedly. But the final showdown between the white and yellow ninjas comes right at the end, after the original 1970s story has finished, and has no connection with anything.

I’ve only bothered reviewing this (a) to show my amazement that such a piece of bastardised tat exists, and (b) to mention that the ninjas seems to have some sort of magical teleportation powers, appearing and disappearing in a puff of smoke. Tomas Tang had previously been associate producer on the dreadful Firefist of Incredible Dragon.