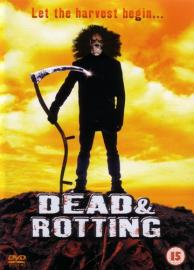 Three friends run afoul of a local crazy old woman, rumoured to be a witch, and her inbred redneck ‘son’. She takes her revenge by transforming herself from old crone (Barbara Katz-Norrod) to seductive sexpot (the ubiquitous - and long may she be so - Ms Rochon). ‘Abi’ seduces all three men then uses their semen to grow three ghouls from buried pumpkins. Backed up by these scythe-wielding uglies, she kills two of our heroes, but the third fights back with the help of a white witch.

Actually, ‘kills’ may not be the right word. The unfortunate fellows are tied to chairs and left to rot while twigs and leaves grow out of their scalped heads. Between these ‘dead and rotting’ victims and the pumpkin-ghouls, make-up artist Ron Karkoska has his work cut out but comes through with flying colours, especially given the somewhat limited budget. 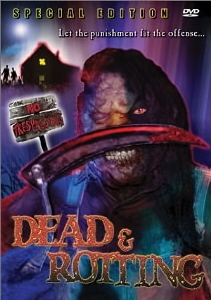 Ably helmed by make-up artist David Barton, Dead and Rotting is an enjoyable slice of American Gothic. It’s only 72 minutes, but who needs a film like this to be longer? In any case, Tempe have done their usual superlative work in making this Limited Special Edition DVD absolutely packed with stuff. As well as the expected trailer, stills gallery, trailers for other Tempe releases, and commentary track (by director Barton, star Hoover and David Greathouse, who plays one of the ghouls!), there’s two rather ramshackle behind-the-scenes featurettes - one general, one on Karkoska’s make-up and effects - plus an 8mm film made by Barton as a teenager (Howard Street Blues, a spoof of a certain police series) which shows a certain nascent talent.

Not only that, you also get a whole extra film: Low Budget Productions’ Filthy McNasty and that has its own director’s commentary too. Talk about value for money! (The regular DVD has Stitches instead of Filthy McNasty.)

MJS rating: B+
review originally posted before November 2004
Posted by MJ Simpson at 18:53