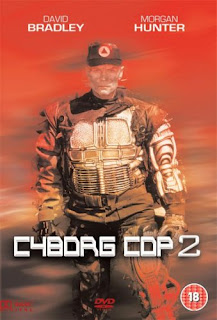 The second adventure for rogue cop Jack Ryan (Bradley) isn’t nearly as satisfying as the first, and the only attempt at continuity is Ryan’s adopted son, Frankie. This time out, the cyborg in question starts as Jesse Starkraven (Hunter), a murderous crime lord who kills Ryan’s partner but is then sprung from Death Row by a covert government organisation, the Anti-Terrorist Group. Starkraven (rechristened ‘Spartacus’) is one of five killers turned into cyborgs for nefarious military purposes, who escape their lab and hole up in a cyborg development facility in Iowa, which is disguised as a power station. Their plan is to increase their number and eventually subjugate humanity - very ambitious. But Jack Ryan is on their trail.

Despite plenty of huge explosions and some well-done fist- and gun-fights, the sequel just doesn’t have the charm of the original. John Stevens’ script (from a story by director Firstenberg) is reasonable and, combined with Bradley’s performance, keeps the character of Ryan consistent. He’s a likable and charismatic action hero. The female lead is the deputy director of the ATG, Liz McDowell (Pierce) but she teams up with Ryan too late for any real chemistry to develop. 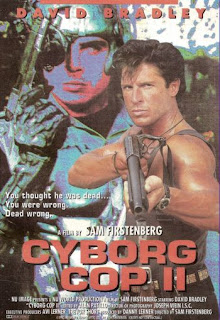 Cyborg Cop II misses the exotic locale of the first film (both were shot in South Africa) and it misses the camp villainy of John Rhys-Davies. It’s mainly saved by Bradley - in a subgenre where a World Kickboxing Association belt is often deemed more important than acting ability, he’s a real treasure. Of course, there is no actual cyborg cop in Cyborg Cop II, which in America had the more relevant title Cyborg Soldier. On both sides of the Atlantic, the video sleeve actually showed the cyborg from the first film!