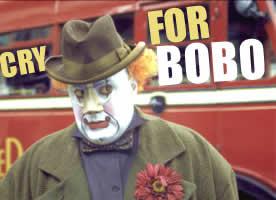 This hilarious and wonderfully original, ten-minute, near-silent comedy was made as part of a BBC Scotland scheme called ‘Tartan Shorts’. It went on to win all these awards including the extremely prestigious Royal Television Society’s award for Best Regional Programme, the jury for which described it as "sensational, sophisticated, imaginative and visionary." And they weren’t wrong.

In a Victorian-esque fantasy Britain where clowns are second-class citizens, Bobo and Koko try to break out of their poverty trap by robbing a bank. They manage this - despite their enormous shoes, baggy trousers, etc. - but the plan comes unstuck when they get into their getaway car and the doors all fall off. 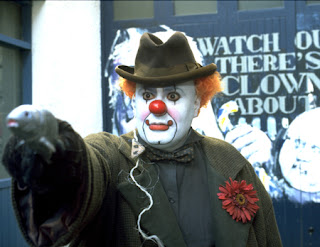 Stuck in prison, Bobo learns that his wife and child - also clowns of course with the full make-up and costume - are despairing of their miserable life and considering running away to join the civil service. With the aid of his friend Koko, Bobo stages a break-out from jail to get his family back.

Bobo’s bizarre world is beautifully realised thanks to production designer Tom Sayer and the photography of Scott Ward. And the special effects are both brilliantly simple and wonderfully effective, especially the jailbreak, shot using simple miniatures, a sort of forced perspective and excellent timing. But it’s the attention to detail which really makes this film special, like the anti-clown posters on the walls and (on screen so briefly it’s nigh on impossible to read) a homeless clown at a train station selling a magazine called The Big Shoe!

The performances are uniformly excellent: I’m not sure who plays who under all that make-up, but Steven McNicoll (Bobo? Koko?) was in Atletico Partick, Mark McDonnell (Koko? Bobo?) is Alby Brook on the Big Finish Dalek Empire CDs, and both were in a BBC Scotland comedy sketch series called Velvet Soup. Also watch out for James Bryce (Petrie in The Insidious Dr Fu Manchu) as a shopkeeper.

Cry for Bobo is beautifully written, directed and produced and works on every level, as knockabout silliness, as a serious satire on racial intolerance, and as a visually sumptuous, technically perfect short film. This is an absolute must-see.

review originally posted before November 2004
Posted by MJ Simpson at 21:27