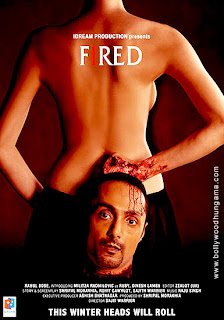 When I was writing Urban Terrors (£17.95 from several good bookshops), one of the films I had to sit through, so that you wouldn’t, was a stinker called The Sick House. I won’t dwell here on how and why it’s rubbish - buy my damn book if you’re that interested - but rest assured that it’s not worth an hour and a half of your time.

The one interesting thing about The Sick House is that it turned out to be an Anglo-Indian co-production, jointly made by Charlotte Wontner’s company Hopscotch Films and Bollywood prodco iDream Production who had recently made Shripal Morakhia’s tandoori terror flick Naina. After The Sick House, Wontner made two more features for iDream Production: a comedy called Straight and a horror movie called Fired. On this brace of pictures however she was just a producer for hire; they’re not Hopscotch productions so Fired doesn’t count as British and gets just a couple of lines in my book.

I was intrigued by what I read about Fired, but it seemed to have had one festival screening (at Abertoir in 2010) and then disappeared. It transpires that there was a German DVD release in March 2011 (which would make it too late for the book’s 1997-2008 remit, even if it was British) hence all three extant IMDB reviews are German, and it is also available on Amazon instant video. But there has to date not been a UK or US release that I’m aware of, and possibly not even an Indian one.

This week I discovered that iDream Motion Pictures, the company’s distribution arm, have a whole load of complete movies on their YouTube channel including Fired, Naina, Straight, Jajantaram Mamantaram (a sort of Bollywood Gulliver’s Travels), Cape Karma, Ek Hasina Thi, dramas, comedies, thrillers and, erm, The Sick House. So I sat down to watch Fired and discovered, guess what, it’s really rather good. 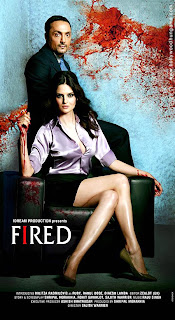 The premise is simple. Joy Mittal (Rahul Bose, who looks a bit like an Indian Derren Brown), is an ambitious young exec in the London branch of an Indian company, who has been asked to sack 121 of the 137 employees, including his own boss and a woman with whom he was having an affair. We join Mittal after the deed is done as he is busy removing names from doors and moving his desk clutter into the boss’s office. He is 20 floors up in a modern central London office block and there is no-one else around except one security guard (Dinesh Lamba).

Fired has a very simple concept: a series of odd things happen to Mittal as he stalks around the empty offices and corridors. Gradually they get odder, weirder, spookier, scarier, more horrific and somewhere down the line they pass from possibly the work of disgruntled ex-employees who haven’t left the building to obviously impossible things which could only be explained supernaturally or psychologically. Mittal is on meds for depression (they must be working because he starts the film as a cocky, egotistic son of a bitch!) but he has taken too few or too many or the wrong sort. But does that explain what is happening to him - what he sees and what he experiences - or is it karmic vengeance on behalf of the 121 latest additions to the unemployment figures? Perhaps it’s both.

Certainly in the scenes shared with the security guard, there is no evidence of fantastical goings-on and some CCTV footage repeats earlier scenes of Mittal reacting to things which we can now see weren’t there. In the third act, Mittal escapes from the building (apparently, possibly...) but his nightmares don’t end. If anything they get worse. There are a few other speaking roles - Mrs Mittal is seen at the other end of a phone, as is his boss in India - but the only other actor with any significant screen-time is Militza Radmilovic as Ruby, Mittal’s former illicit squeeze (or at least, a non-speaking apparition of her).

Truth be told, there is very little here that we haven’t seen before. Toys move by themselves, doors lead back to where someone is trying to escape from, and there is a J-horror influence so overt in places that it is quite a surprise to reach the end of the film and realise that we haven’t seen a woman crawl out of a TV set. But the skill - and the enjoyment - is in the way it is all put together, the gradual escalation of the spookiness and its transmogrification into genuine nastiness. Highlights include Ruby slowly turning into a zombie and a terrific sequence when Mittal believes he is tearing the flesh from his own face.

A film like this lives or dies on its central performance. Bose is never off-screen except for telephone cutaways yet has very little dialogue beyond accusatory who’s-there shouts. Despite this he turns in a storming performance, carrying the film and the audience with him as Mittal’s world falls apart; in this he is helped by the hair, make-up and costume crews who gradually dishevel him throughout the movie.

Wikipedia calls Bose “an Indian actor, screenwriter, director, social activist, and amateur rugby union player”. After starting out as a copywriter, Bose moved into film and theatre acting; he even came over here to Leicester in 1999, starring in The Square Circle at the old Haymarket Theatre. He was due to star in a BBC production of Midnight’s Children which was cancelled but later had a smaller role in an Indian film version of that novel. Over the years he has mixed serious art-house pictures with Bollywood movies and has won plaudits for both sides of his career as well as his humanitarian work. He is fantastic in Fired.

Lamba (the Guard) was in Naina and also in 2009 horror sequel Raaz: The Mystery Continues. Radmilovic is a half-Serbian model with an economics degree from the LSE who set out to build a Bollywood career after appearing in an Indian advert for British Telecom, although her only other role seems to have been in Anil Sharma’s historical epic Veer. She now works in PR for posh jewellers Tiffany in the United Arab Emirates, where people can afford that sort of stuff. Sasha Desouza-Willock, who was in a Morrisons TV ad, gets fourth billing as Ruby’s daughter Angel.

Also in the cast are Nassar Abdulla (who played Albert Speer(!) in an all-Indian turkey called Gandhi to Hitler), Yusuf Hussain (Dhoom 1 and 2), Mo Idriss (Dead Cert, Devil’s Playground, Strippers vs Werewolves), Johnny Lynch (Strippers vs Werewolves, Cockneys vs Zombies), Dennis Santucci (Dead Cert, It’s a Wonderful Afterlife, Kung Fu Flid) and Paul Lavers - who was in the 1978 Doctor Who serial ‘The Androids of Tara’ and the Beeb’s 1974 Ghost Story for Christmas, ‘The Treasure of Abbot Thomas’.

Shripal Morakhia was the other producer and is one of three credited writers, along with the director plus iDream staff scribe Rohit Gahlowt. Damian Creagh (who more recently worked on The Seasoning House) was production designer; Jogendra Nath Panda provided the fine cinematography including some very good early morning exterior scenes; Lorraine Hill (Urban Gothic, A Lonely Place to Die) handled make-up; and Tristan Versluis’ name can be spotted (misspelled) in the depths of the credits.

Sajit Warrier trained as a graphic designer and studied film-making at UCLA. He was assistant editor on a 2003 Hollywood picture called Coronado, then worked as an editor, animator and VFX supervisor for Fox. He is now back in Mumbai making adverts and idents. Before Fired, he was already news-worthy around Bollywood for having claimed (successfully, I think) that Ram Gopal Varma’s 2009 horror Agyaat was based on his script. But the controversy over Agyaat seems to have been mild compared with Fired, which kicked up a real shit-storm with the Indian censor - who deemed it too gory and too sexy. It is certainly more horrific than, say, Varma’s Bhoot, but this is hardly A Serbian Film or Saw. Possibly Fired was looked on less favourably than other Bollywood fright-flicks because it does not have the expected distractions. There are no songs here, there’s no dancing and no comic relief. Although there is an intermission, which seems unnecessary in a film running only 84 minutes.

That said, the original cut was clearly longer as there are scenes in the trailer which are not in the finished movie. These involve Mittal and Ruby enjoying London nightife together so must have been either a prologue or a flashback, and there is a brief topless shot of Radmilovic although it’s hardly excessive nudity. My suspicion, based on these clips and a random news announcement about a car crash which remains in the film, is that the original version was more explicit about the events being the supernatural revenge of a woman spurned (and sacked) by her lover, who subsequently dies in a stress-induced car-smash. One other curious anomaly is a (living) office worker seen briefly near the start, played by Lavers, who asks “Does it give you a warm, fuzzy feeling to fire 121 people?” He has evidently been revoiced because in the film he says, rather bizarrely, “one twenty-one people” but in the trailer he says the grammatically correct “a hundred and twenty-one people”.

What I can’t understand is why Fired (which was shot in London in 2009, including some establishing night-time shots of Tower Bridge) hasn’t been released in the UK. Half the (minimal) dialogue is in English and it would be easy - if it was deemed necessary - to dub the rest. The missing sex and trimmed gore could be reinstated without upsetting the BBFC (in its current state it would probably get a 15). I could see this going down a storm with British Horror Revival fans as it has the same ‘corporate horror’ vibe as London Voodoo and Severance. I particularly like the way that it never feels the need to explain what is going on, yet doesn’t disappoint or ever seem random. 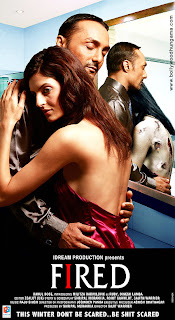 Well worth checking out, Fired is a very western Bollywood film (far more than, say Ra-One, which was set and shot in London but only used the city as window dressing). Just like Joy Mittal’s shiny suit and trim beard, Fired takes European aesthetics and adapts them in a stylishly Indian way. That should mean that fans of both subgenres would like it but perhaps, as sometimes happens with cinematic chimeras, both groups might feel alienated and ill-served. The only way to be sure is for you to give it a try. (I can’t judge: I’ve written a book on modern British horror films and have never made any secret of my fondness for a bit of Bolly (watch out for me this summer sharing the screen with Sunny and Bobby Deol, oh yes!) - so I fall into both camps.)

One final note. The film’s marketing, despite featuring a nice gag shot of Rahul Bose’s severed head and a sexy naked back (possibly Radmilovic’s) undoubtedly suffered because some dozy graphic designer decided to put the title in white with the letter I in blood red, resulting in what appears to be a poster for a film called Fred!