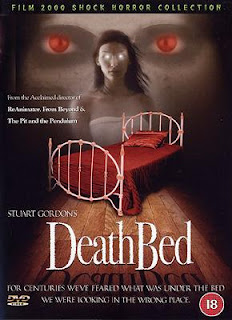 I have no hesitation in saying straight away that DeathBed (or, to give it its full title: Stuart Gordon Presents DeathBed) is the creepiest, scariest movie I have seen in a long while, and is inarguably the best ghost movie since The Sixth Sense. It’s not quite perfect, but it is a terrific film which is unreservedly recommended as a superior B-movie.

Photographer Jerry (newcomer Brave Matthews) and illustrator Karen (Tanya Dempsey: Hell Asylum, Witchouse 3) move into a loft apartment in a converted warehouse and discover - behind an old, long-locked door - an ancient brass bedstead which they put to good use. But the bed and/or apartment hark back to a rather nasty sexual murder in the 1920s, and Karen starts seeing and hearing odd things, as well as having flashbacks to an unpleasant experience from her own childhood.

Director Draven (Hell Asylum, Cryptz), working from a cracking script by Monsters/Tales from the Darkside helmer Strysik, builds the creepiness beautifully. He works up from strange noises to glimpsed blood (perhaps real, perhaps an illusion) to full-scale, horrific, supernatural violence. Dempsey - surely the best new actress in the field for years - is fantastic in the lead role; she has a charisma that many B-movie actresses (and indeed A-list stars) lack, combined with genuine acting talent (also in short supply at all levels of Hollywood). Her slightly hooded eyes give her a unique combination of vulnerability and confidence, the perfect mix for roles in movies like this: she always looks like she’s about to burst into tears - but when she’s done crying she’s going to kick some serious arse!

Matthews is also excellent and there’s sterling support from Joe Estevez, a man who now has more than 100 films on his resume - 15 dated this year alone! Sometimes wasted in throwaway cameos as a token ‘name’, Estevez’s role here as the landlord shows that, given a good script and a good director, he’s a fine actor. (He also turns up in Hell Asylum, Minds of Terror and Ron Ford's Dead Season.) 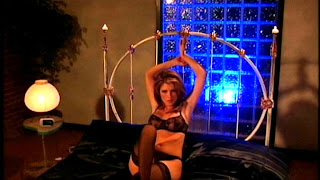 The movie kicks off with a beautifully shot black and white prologue which can only be described as a German expressionist snuff movie - sort of GW Pabst Presents Faces of Death - with Meagan Mangum as a Louise Brooks lookalike indulging in an ill-advised bondage session (on that bed, of course). The other actor in this scene, credited as ‘Dukey Flyswatter’, is actually Michael Sonye (Surf Nazis Must Die, Hollywood Chainsaw Hookers) reprising the pseudonym he used as the voice of the imp in the classic Sorority Babes in the Slimeball Bowl-O-Rama (he also wrote and starred in Prison Ship Starslammer - wow!).

Charlie Band gets an executive producer credit - it’s a Full Moon production - as does Stuart Gordon, though it’s clear from the 20-minute ‘making of’ featurette that Gordon was actually on set a fair amount. Draven often photographs his own movies but here has handed cinematography over to industry veteran Mac Ahlberg, presumably on the recommendation of Gordon. Ahlberg’s resume reads like a list of any discerning horror/SF fan’s favourite movies, including plenty of Stuart Gordon titles: Hell Night, From Beyond, Trancers, Ghoulies, House I, II and III, Arena, Robojox, Innocent Blood, Space Truckers and the unforgettable Metalstorm: The Destruction of Jared-Syn (famous for its lack of metalstorms and the fact that Jared-Syn does not get destroyed!). What is more, back home in Sweden he wrote and directed the notorious Around the World with Fanny Hill! (Draven has nevertheless kept a hand in the editing process: DeathBed has some almost subliminal frights, and the flashbacks and fantasy sequences are seamlessly integrated into the picture.)

However, there is one thing about the movie which I didn’t like - and that’s the ending. The epilogue is about a minute too long: the first shot has an unsettling irony which would have made a superb ending, as well as raising very real doubts about how much of the preceding story was reality and how much was happening only in one character’s mind. Unfortunately, an extra, entirely unnecessary fright is tacked on at the end which detracts from, rather than tops off, the preceding 75 minutes of unnerving horror. 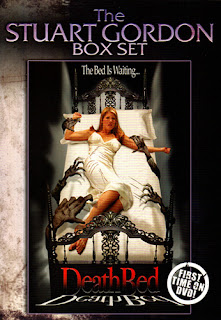 But that’s nowhere near enough to spoil what is undoubtedly a very fine movie, combining genuine creepiness - photographs, drawings, hypnosis and a mirror, plus of course the bed, all build atmosphere - with some frights that had me leaping out of my chair (yet it never descends into cheap ‘cat-scares’). As well as the ‘making of’, there’s a trailer (do not watch it before seeing the film) and a commentary with Draven, Gordon and Strysik. Plus Stuart Gordon’s own Castle Freak! That’s right - you get a whole other feature film, and a good one too. Talk about value for money.

Draven has now said sayonara to Full Moon. His next film, Cybervamps, will be through his own company Darkworld Pictures. I for one can’t wait.

review originally posted before November 2004
Posted by MJ Simpson at 18:04